Feodor I of Russia

Being unhealthy and, by some reports, intellectually disabled, Feodor was only the nominal ruler, having his duties handed over to his wife's brother and trusted minister Boris Godunov,[1] who would later succeed Feodor as tsar. Feodor's childless death left the Rurikid dynasty extinct, and spurred Russia's descent into the catastrophic Time of Troubles.

In English he is sometimes called Feodor the Bellringer in consequence of his strong faith and inclination to travel the land[citation needed] and ring the bells at churches. However, in Russian the name "Bellringer" is hardly ever used.

In Russian documents he is sometimes called blessed (Russian: Блаженный). He is also listed in the Great Synaxaristes of the Orthodox Church with his feast day on January 7 (OS).[2]

Feodor was considered[who?] a simple-minded man who took little interest in politics, and was never considered a candidate for the Russian throne until the death of his elder brother Ivan Ivanovich.[citation needed] He was of pious character and spent most of his time in prayers. In 1580, Feodor married Irina (Alexandra) Feodorovna Godunova (1557 – 26 October/23 November 1603), sister of Ivan's minister Boris Godunov. Upon this marriage, Boris legitimized himself, after Ivan IV's death, as a de facto regent for the weak and disabled tsar Feodor.[3]

Unlike his father, Feodor had no enthusiasm in maintaining exclusive trading rights with the Kingdom of England. Feodor declared his kingdom open to all foreigners, and dismissed the English ambassador Sir Jerome Bowes, whose pomposity had been tolerated by Feodor's father. Elizabeth I sent a new ambassador, Giles Fletcher, the Elder, to demand Boris Godunov to convince the tsar to reconsider. The negotiations failed, due to Fletcher addressing Feodor with two of his titles omitted. Elizabeth continued to appeal to Feodor in half appealing, half reproachful letters. She proposed an alliance, something which she had refused to do when offered one by Feodor's father, but was turned down.[4]

After almost twelve years of marriage, Tsaritsa Irina gave birth to a daughter, Feodosia, in 1592. Feodosia died in 1594 aged two. Feodor's failure to sire other children brought an end to the centuries-old central branch of the Rurik dynasty (although many princes of later times are descendants of Rurik as well). Feodor was succeeded as tsar by Godunov, who had for many years ruled in Feodor's name. The termination of the dynasty can also be considered to be one of the reasons for the Time of Troubles. He died in Moscow and was buried at Archangel Cathedral, Kremlin.

His troubled reign was dramatised by Aleksey Konstantinovich Tolstoy in his verse drama Tsar Fiodor Ioannovich (1868).[5] 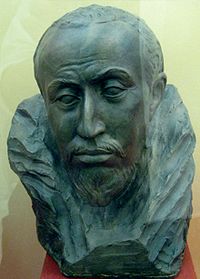