Fernando was born in Córdoba, Spain, and spent his early years there.[1] After Columbus's triumphant return from his first voyage, Fernando was appointed a page to the Spanish crown prince Don Juan but transferred to the service of Queen Isabella following the young prince's death.

Between the ages of 13 and 15, Fernando was a crew member on Columbus' fourth voyage to the New World. After his father's death, Fernando accompanied his older half-brother Diego to the New World in 1509 upon Diego's appointment as governor of Hispaniola. But Fernando preferred a more settled life and returned to Spain a few months later. 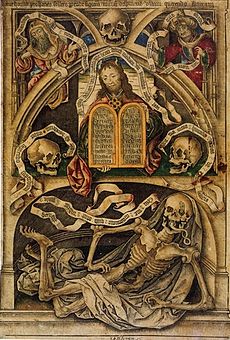 Allegory of the Transience of Life (ca. 1480-90), 33.3 x 22.6 cm, engraving printed on vellum. In the collection of the British Museum. This print by the anonymous fifteenth century engraver Master I. A. M. of Zwolle is one example of the early prints collected by Columbus.[2]

As an adult, Fernando was known as a scholar. He had a generous income from his father's New World demesne and used a sizeable fraction of it to buy books, eventually amassing a personal library of over 15,000 volumes. This library was patronized by educated people in Spain and elsewhere, including the Dutch philosopher Erasmus.

The impressively large library was unique in several ways.

After his father's death, Fernando inherited Columbus' personal library. What remains of these volumes contains much valuable information on Columbus, his interests, and his explorations.

Provisions were made in his will to ensure that the library would be maintained after his death, specifically that the collection would not be sold and that more books would be purchased. Despite this precaution, the ownership of the library was contested for several decades after Fernando's death until it passed into the hands of the Cathedral in Seville, Spain.

During this time of disputed ownership, the size of the library was reduced to about 7,000 titles. However, the library, renamed the Biblioteca Colombina, has been well maintained by the Cathedral. Today it is accessible for consultation by scholars, students and bibliophiles alike.[3]

In the first paragraph of page 3 of Keen's translation, Fernando dismissed the fanciful story that the Admiral descended from the Colonus mentioned by Tacitus. However, he refers to "those two illustrious Coloni, his relatives ;". According to Note 1, on page 287, these two "were corsairs not related to each other or to Christopher Columbus, one being Guillame de Casenove, nicknamed Colombo, Admiral of France in the reign of Louis XI". At the top of page 4, Fernando listed Nervi, Cugureo, Bugiasco, Savona, Genoa and Piacenza (all inside the former Republic of Genoa) as possible places of origin. He also stated:

Colombo ... was really the name of his ancestors. But he changed it in order to make it conform to the language of the country in which he came to reside and raise a new estate.

The publication of Historie has been used by historians as providing indirect evidence about the Genoese origin of the Discoverer. Fernando's manuscript was eventually inherited by his nephew Luis, the playboy grandson of the Discoverer. Luis was always strapped for money and sold the manuscript to Baliano de Fornari, "a wealthy and public-spirited Genoese physician". On page xv, Keen wrote:

In the depth of winter the aged Fornari set out for Venice, the publishing center of Italy, to supervise the translation and publication of the book.

On page xxiv, the 25 April 1571 dedication by Giuseppe Moleto states:

Your Lordship [Fornari], then, being an honorable and generous gentleman, desiring to make immortal the memory of this great man, heedless of your Lordship's seventy years, of the season of the year, and of the length of the journey, came from Genoa to Venice with the aim of publishing the aforementioned book ... that the exploits of this eminent man, the true glory of Italy and especially of your Lordship's native city, might be made known.

Fernando Colón died at Seville in 1539.