Ferdinand III (1199 or 1201 – 30 May 1252) was King of Castile from 1217 and King of León from 1230 as well as King of Galicia from 1231.[1] He was the son of Alfonso IX of León and Berenguela of Castile. Through his second marriage he was also Count of Aumale. Ferdinand III was one of the most successful kings of Castile, securing not only the permanent union of the crowns of Castile and León, but also masterminding the most expansive campaign of Reconquista yet.

By military and diplomatic efforts, Ferdinand greatly expanded the dominions of Castile into southern Spain, annexing many of the great old cities of al-Andalus, including the old Andalusian capitals of Córdoba and Seville, and establishing the boundaries of the Castilian state for the next two centuries.

The exact date of Ferdinand's birth is unclear. It has been proposed as early as 1199 or even 1198, although more recent researchers commonly date Ferdinand's birth in the Summer of 1201.[2][3][4] Ferdinand was born at the Monastery of Valparaíso (Peleas de Arriba, in what is now the Province of Zamora).

From his birth to 1204 Ferdinand was designated heir to his father's kingdom of Leon with the support of his mother and the kingdom of Castile despite the fact that he was Alfonso IX's second son. Alfonso IX already had a son and two daughters from his first marriage to Teresa of Portugal but at the time he never acknowledge his first son (also named Ferdinand) as his heir. However, the Castilians saw the elder Ferdinand as a potential rival and threat to Berengaria's son.

The marriage of Ferdinand's parents was annulled by order of Pope Innocent III in 1204, due to consanguinity. Berengaria then took their children, including Ferdinand, to the court of her father, King Alfonso VIII of Castile.[6] In 1217, her younger brother, Henry I, died and she succeeded him to the Castilian throne and Ferdinand as her heir, but she quickly surrendered it to her son.

Unification of Castile and León 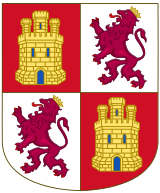 United arms of Castile and León which Ferdinand first used.

When Ferdinand's father, Alfonso IX of León, died in 1230, his will delivered the kingdom to his older daughters Sancha and Dulce, from his first marriage to Teresa of Portugal. But Ferdinand contested the will, and claimed the inheritance for himself. At length, an agreement was reached, negotiated primarily between their mothers, Berengaria and Teresa, and signed at Benavente on 11 December 1230, by which Ferdinand would receive the Kingdom of León, in return for a substantial compensation in cash and lands for his half-sisters, Sancha and Dulce. Ferdinand thus became the first sovereign of both kingdoms since the death of Alfonso VII in 1157.[7]

Early in his reign, Ferdinand had to deal with a rebellion of the House of Lara.

Since the Battle of Las Navas de Tolosa in 1212 halted the advance of the Almohads in Spain, a series of truces had kept Castile and the Almohad dominions of al-Andalus more-or-less at peace. However, a crisis of succession in the Almohad Caliphate after the death of Yusuf II in 1224 opened to Ferdinand III an opportunity for intervention. The Andalusian-based claimant, Abdallah al-Adil, began to ship the bulk of Almohad arms and men across the straits to Morocco to contest the succession with his rival there, leaving al-Andalus relatively undefended. Al-Adil's rebellious cousin, Abdallah al-Bayyasi (the Baezan), appealed to Ferdinand III for military assistance against the usurper. In 1225, a Castilian army accompanied al-Bayyasi in a campaign, ravaging the regions of Jaén, vega de Granada and, before the end of the year, had successfully installed al-Bayyasi in Córdoba. In payment, al-Bayyasi gave Ferdinand the strategic frontier strongholds of Baños de la Encina, Salvatierra (the old Order of Calatrava fortress near Ciudad Real) and Capilla (the last of which had to be taken by siege). When al-Bayyasi was rejected and killed by a popular uprising in Cordoba shortly after, the Castilians remained in occupation of al-Bayyasi's holdings in Andújar, Baeza and Martos.

The crisis in the Almohad Caliphate, however, remained unresolved. In 1228, a new Almohad pretender, Abd al-Ala Idris I 'al-Ma'mun', decided to abandon Spain, and left with the last remnant of the Almohad forces for Morocco. Al-Andalus was left fragmented in the hands of local strongmen, only loosely led by Muhammad ibn Yusuf ibn Hud al-Judhami. Seeing the opportunity, the Christian kings of the north - Ferdinand III of Castile, Alfonso IX of León, James I of Aragon and Sancho II of Portugal - immediately launched a series of raids on al-Andalus, renewed almost every year. There were no great battle encounters - Ibn Hud's makeshift Andalusian army was destroyed early on, while attempting to stop the Leonese at Alange in 1230. The Christian armies romped through the south virtually unopposed in the field. Individual Andalusian cities were left to resist or negotiate their capitulation by themselves, with little or no prospect of rescue from Morocco or anywhere else.

The twenty years from 1228 to 1248 saw the most massive advance in the reconquista yet. In this great sweep, most of the great old citadels of al-Andalus fell one by one. Ferdinand III took the lion's share of the spoils - Badajoz and Mérida (which had fallen to the Leonese), were promptly inherited by Ferdinand in 1230; then by his own effort, Cazorla in 1231, Úbeda in 1233, the old Umayyad capital of Córdoba in 1236, Niebla and Huelva in 1238, Écija and Lucena in 1240, Orihuela and Murcia in 1243 (by the famous 'pact of Alcaraz'), Arjona, Mula and Lorca in 1244, Cartagena in 1245, Jaén in 1246, Alicante in 1248 and finally, on 22 December 1248, Ferdinand III entered as a conqueror in Seville, the greatest of Andalusian cities. At the end of this twenty-year onslaught, only a rump Andalusian state, the Emirate of Granada, remained unconquered (and even so, Ferdinand III managed to extract a tributary arrangement from Granada in 1238).

Ferdinand annexed some of his conquests directly into the Crown of Castile, and others were initially received and organized as vassal states under Muslim governors (e.g. Alicante, Niebla, Murcia), although they too were eventually permanently occupied and absorbed into Castile before the end of the century (Niebla in 1262, Murcia in 1264, Alicante in 1266). Outside of these vassal states, Christian rule could be heavy-handed on the new Muslim subjects. This would eventually lead to the mudéjar uprisings of 1264-66, which resulted in mass expulsions of the Muslim populations. The range of Castilian conquests also sometimes transgressed into the spheres of interest of other conquerors. Thus, along the way, Ferdinand III took care to carefully negotiate with the other Christian kings to avoid conflict, e.g. the treaty of Almizra (26 March 1244) which delineated the Murcian boundary with James I of Aragon.

Ferdinand divided the conquered territories between the Knights, the Church, and the nobility, whom he endowed with great latifundias. When he took Córdoba, he ordered the Liber Iudiciorum to be adopted and observed by its citizens, and caused it to be rendered, albeit inaccurately, into Castilian.

The capture of Córdoba was the result of a well-planned and executed process whereby parts of the city (the Ajarquía) first fell to the independent almogavars of the Sierra Morena to the north, which Ferdinand had not at the time subjugated.[8] Only in 1236 did Ferdinand arrive with a royal army to take the Medina, the religious and administrative centre of the city.[8] Ferdinand set up a council of partidores to divide the conquests and between 1237 and 1244 a great deal of land was parcelled out to private individuals and members of the royal family as well as to the Church.[9] On 10 March 1241, Ferdinand established seven outposts to define the boundary of the province of Córdoba.

On the domestic front, Ferdinand strengthened the University of Salamanca and erected the current Cathedral of Burgos. He was a patron of the newest movement in the Church, that of the mendicant Orders. Whereas the Benedictine monks, and then the Cistercians and Cluniacs, had taken a major part in the Reconquista up until then, Ferdinand founded houses for friars of the Dominican, Franciscan, Trinitarian, and Mercedarian Orders throughout Andalusia, thus determining the future religious character of that region. Ferdinand has also been credited with sustaining the convivencia in Andalusia.[10] He himself joined the Third Order of St. Francis, and is honored in that Order.

He took care not to overburden his subjects with taxation, fearing, as he said, the curse of one poor woman more than a whole army of Saracens.[11] 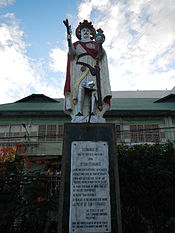 Ferdinand III had started out as a contested king of Castile. By the time of his death in 1252, Ferdinand III had delivered to his son and heir, Alfonso X, a massively expanded kingdom. The boundaries of the new Castilian state established by Ferdinand III would remain nearly unchanged until the late 15th century. His biographer, Sister María del Carmen Fernández de Castro Cabeza, A.C.J., asserts that, on his death bed, Ferdinand said to his son "you will be rich in land and in many good vassals, more than any other king in Christendom."[12]

Ferdinand was buried in the Cathedral of Seville by his son, Alfonso X. His tomb is inscribed in four languages: Arabic, Hebrew, Latin, and an early version of Castilian.[13] He was canonized as St. Ferdinand by Pope Clement X in 1671.[14] Today Saint Fernando can still be seen in the Cathedral of Seville, for he rests enclosed in a gold and crystal casket worthy of the king. His golden crown still encircles his head as he reclines beneath the statue of the Virgin of the Kings.[15] Several places named San Fernando were founded across the Spanish Empire in his honor.

The symbol of his power as a king was his sword Lobera.

In 1219, Ferdinand married Elisabeth of Hohenstaufen (1203–1235), daughter of the German king Philip of Swabia and Irene Angelina. Elisabeth was called Beatriz in Spain. Their children were:

After he was widowed, he married Joan, Countess of Ponthieu, before August 1237. They had four sons and one daughter: