Ferdinand IV, King of the Romans 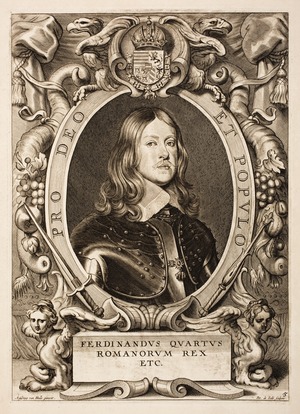 After the French attempted to modify the system of the election of King of the Romans, Emperor Ferdinand III made an opportunity of a recent decline in the prestige of France, and was able to install Ferdinand IV as King of the Romans, and de facto heir to the Holy Roman Empire. He was crowned in Ratisbon (Regensburg, present-day south-east Germany) on 18 June 1653 after gaining the position on 31 May 1653.[5] However, Ferdinand IV unexpectedly died of smallpox in Vienna on 9 July 1654, and was later succeeded by his brother Leopold I as King of the Romans.[1] Prior to his death, it was planned that he would marry Philip IV of Spain's daughter Maria Theresa, Queen of France, his cousin.[2] Upon the death of Ferdinand III, Leopold I was elected as Holy Roman Emperor.[5]