Ferdinand I of Austria

From Infogalactic: the planetary knowledge core
Jump to: navigation, search
Not to be confused with Ferdinand I, Holy Roman Emperor.

Ferdinand I (19 April 1793 – 29 June 1875) was Emperor of Austria, President of the German Confederation, King of Hungary, Croatia, and Bohemia (as Ferdinand V), as well as associated dominions from the death of his father (Francis II, Holy Roman Emperor) on 2 March 1835, until his abdication after the Revolutions of 1848.

He married Maria Anna of Savoy, the sixth child of Victor Emmanuel I of Sardinia. They had no issue. Ferdinand was incapable of ruling his empire because of his mental deficiency, so his father, before he died, drafted a will promulgating that he consult Archduke Louis on every aspect of internal policy, and urged him to be influenced by Prince Metternich, Austria's foreign minister.[2]

He abdicated on December 2, 1848. He was succeeded by his nephew, Francis Joseph. Following his abdication, he lived in Hradčany Palace, Prague, until his death in 1875.[3]

Ferdinand was the eldest son of Francis II, Holy Roman Emperor and Maria Theresa of Naples and Sicily. As a result of his parents' genetic closeness (they were double first cousins), Ferdinand suffered from epilepsy, hydrocephalus, neurological problems, and a speech impediment. Upon his marriage to Maria Anna of Savoy, the court physician considered it unlikely that he would be able to consummate the marriage.[4] He was educated by Baron Josef Kalasanz von Erberg, and his wife Josephine, née Gräfin von Attems.[5] 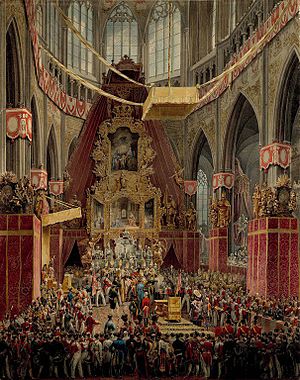 Coronation of King Ferdinand V in 1836 in Prague

Ferdinand has been depicted as feeble-minded and incapable of ruling, but although he had epilepsy, he kept a coherent and legible diary and has even been said to have had a sharp wit. Having as many as twenty seizures per day, however, severely restricted his ability to rule with any effectiveness.

Though he was not declared incapacitated, a regent's council (Archduke Louis, Count Kolowrat, and Prince Metternich) steered the government. His marriage to Princess Maria Anna of Sardinia (1803–1884) was probably never consummated, nor is he believed to have had any other liaisons. When he tried to consummate the marriage, he had five seizures. He is best remembered for his one coherent command, to his cook when told he could not have apricot dumplings (Marillenknödel) because apricots were out of season. He said "I am the Emperor, and I want dumplings!" (German: Ich bin der Kaiser und ich will Knödel!).[6][7] 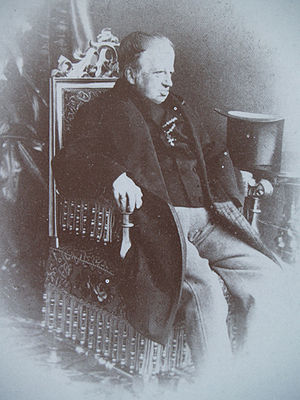 Photograph of the aged Ferdinand dated circa 1870
File:Sarcophagus Ferdinand 1 of Austria Kaisergruft Vienna.jpg
Ferdinand's sarcophagus in Kaisergruft, the Imperial Crypt, in Vienna, Austria

As the revolutionaries of 1848 were marching on the palace, he is supposed to have asked Metternich for an explanation. When Metternich answered that they were making a revolution, Ferdinand is supposed to have said “But are they allowed to do that?” (Viennese German: Ja, dürfen's denn des?) He was convinced by Felix zu Schwarzenberg to abdicate in favour of his nephew, Franz Joseph (the next in line was Ferdinand's younger brother Franz Karl, but he was persuaded to waive his succession rights in favour of his son) who would occupy the Austrian throne for the next sixty-eight years.

Ferdinand recorded the events in his diary: "The affair ended with the new Emperor kneeling before his old Emperor and Lord, that is to say, me, and asking for a blessing, which I gave him, laying both hands on his head and making the sign of the Holy Cross ... then I embraced him and kissed our new master, and then we went to our room. Afterwards I and my dear wife heard Holy Mass ... After that I and my dear wife packed our bags."

Ferdinand was the last King of Bohemia to be crowned as such. Due to his sympathy with Bohemia (where he spent the rest of his life in Prague Castle) he was given the Czech nickname “Ferdinand V, the Good” (Ferdinand Dobrotivý). In Austria, Ferdinand was similarly nicknamed “Ferdinand der Gütige” (Ferdinand the Benign), but also ridiculed as "Gütinand der Fertige" (Goodinand the Finished).

He is interred in tomb number 62 in the Imperial Crypt in Vienna.

His Imperial Royal Apostolic Majesty Ferdinand the First, By the Grace of God

Ferdinand's parents were double first cousins as they shared all four grandparents (Francis' paternal grandparents were his wife's maternal grandparents and vice versa). Therefore Ferdinand only had four great-grandparents, being descended from each of them twice. Further back in his ancestry there is more pedigree collapse due to the close intermarriage between the Houses of Austria and Spain and other Catholic monarchies.