Ferdinand Tönnies (German: [ˈtœniːs]; 26 July 1855 – 9 April 1936) was a German sociologist, economist, and philosopher. He was a major contributor to sociological theory and field studies, best known for his distinction between two types of social groups, Gemeinschaft and Gesellschaft (community and society). He co-founded the German Society for Sociology together with Max Weber and Georg Simmel and many other founders. He was president of the society from 1909 to 1933,[1] after which he was ousted for having criticized the Nazis. Tönnies was considered the first German sociologist proper,[2] published over 900 works and contributed to many areas of sociology and philosophy. Tönnies, Max Weber, and Georg Simmel are considered to be the founding fathers of classical German sociology. Though there has been a resurgence of interest Weber and Simmel, Tönnies has not drawn as much attention.[3]

Ferdinand Tönnies was born 26 July 1855 on the Haubuarg "De Reap", Oldenswort on the Eiderstedt Peninsula into a wealthy farmer's family in North Frisia, Schleswig, then under Danish rule. Tönnies was the only sociologist of his generation who came from the countryside. He was the third child of church chief and farmer August Ferdinand Tönnies (1822–1883) and his wife Ida Frederica (born Mau, 1826–1915) who came from a theological family from East Holstein. The two had seven children, four sons, and three daughters. On the day he was born, Ferdinand Tönnies received the baptismal name of Ferdinand Julius.

At the age of 16, he graduated from high school in Husum and later studied at the universities of Jena, Bonn, Leipzig, Berlin, and Tübingen. At age 22, he received a doctorate in philology at the University of Tübingen in 1877 (with a Latin thesis on the ancient Siwa Oasis).[4] At the age of 25, he habilitated with a thesis on the life and work of Thomas Hobbes at the Christian Albrechts University in Kiel. Tönnies was a student and critic of Hobbes and was also inspired by the works of Herbert Spencer and Sir Henry Maine.[5] He taught at the University of Kiel from 1909 to 1933 and eventually became a private lecturer. He held this post at the University of Kiel for only three years. Because he sympathized with the Hamburg dockers' strike of 1896,[6] the conservative Prussian government considered him to be a social democrat, and Tönnies would not be called to a professorial chair until 1913. He returned to Kiel as a professor emeritus in 1921 where he took on a teaching position in sociology and taught until 1933 when he was ousted by the Nazis, due to earlier publications in which he had criticized them.[7] Remaining in Kiel, he died three years later in 1936.

Many of his writings on sociological theories—including Gemeinschaft und Gesellschaft (1887)—furthered pure sociology. He coined the metaphysical term Voluntarism. Tönnies also contributed to the study of social change, particularly on public opinion,[8] customs and technology, crime, and suicide.[9] He also had a vivid interest in methodology, especially statistics, and sociological research, inventing his own technique of statistical association.[10] After publishing Gemeinschaft and Gesellschaft, Tönnies focused aspects of the social life such as morals, folkways, and public opinion. However he is best known for his published work on Gemeinschaft and Gesellschaft because his later works applied the same concepts to aspects of social life.[11]

Tönnies distinguished between two types of social groupings. Gemeinschaft—often translated as community (or left untranslated)—refers to groupings based on feelings of togetherness and on mutual bonds, which are felt as a goal to be kept up, their members being means for this goal. Gesellschaft—often translated as society—on the other hand, refers to groups that are sustained by it being instrumental for their members' individual aims and goals. The equilibrium in Gemeinschaft is achieved through means of social control, such as morals, conformism, and exclusion, while Gesellschaft keeps its equilibrium through police, laws, tribunals, and prisons. Amish, Hassidic communities are examples of Gemeinschaft, while states are types of Gesellschaft. Rules in Gemeinschaft are implicit, while Gesellschaft has explicit rules (written laws).

Gemeinschaft may be exemplified historically by a family or a neighborhood in a pre-modern (rural) society; Gesellschaft by a joint-stock company or a state in a modern society, i.e. the society when Tönnies lived. Gesellschaft relationships arose in an urban and capitalist setting, characterized by individualism and impersonal monetary connections between people. Social ties were often instrumental and superficial, with self-interest and exploitation increasingly the norm. Examples are corporations, states, or voluntary associations. In his book Einteilung der Soziologie (Classification of Sociology) he distinguished between three disciplines of sociology the latter being Pure or Theoretical (reine, theoretische) Sociology, Applied (angewandte) Sociology, and Empirical (emprische) Sociology.

His distinction between social groupings is based on the assumption that there are only two basic forms of an actor's will, to approve of other men. For Tönnies, such approval is by no means self-evident; he is quite influenced by Thomas Hobbes.[2] Following his "essential will" ("Wesenwille"), an actor will see himself as a means to serve the goals of social grouping; very often it is an underlying, subconscious force. Groupings formed around an essential will are called a Gemeinschaft. The other will is the "arbitrary will" ("Kürwille"): An actor sees a social grouping as a means to further his individual goals; so it is purposive and future-oriented. Groupings around the latter are called Gesellschaft. Whereas the membership in a Gemeinschaft is self-fulfilling, a Gesellschaft is instrumental for its members. In pure sociology—theoretically—these two normal types of will are to be strictly separated; in applied sociology—empirically—they are always mixed.

Tönnies' distinction between Gemeinschaft and Gesellschaft, like others between tradition and modernity, has been criticized for over-generalizing differences between societies and implying that all societies were following a similar evolutionary path, an argument which Tönnies himself never actually proclaimed.[12] 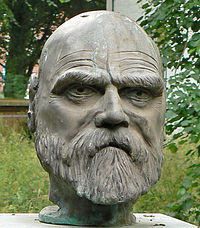 Bust of Tönnies in Husum