The architecture is named after Enrico Fermi, an Italian physicist. 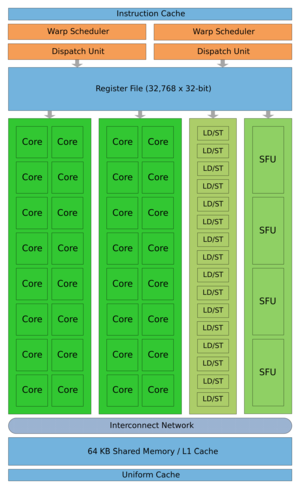 Load/Store Units: Allow source and destination addresses to be calculated for 16 threads per clock. Load and store the data from/to cache or DRAM.

Special Functions Units (SFUs): Execute transcendental instructions such as sin, cosine, reciprocal, and square root. Each SFU executes one instruction per thread, per clock; a warp executes over eight clocks. The SFU pipeline is decoupled from the dispatch unit, allowing the dispatch unit to issue to other execution units while the SFU is occupied.

Fused Multiply-Add (FMA) perform multiplication and addition (i.e., A*B+C) with a single final rounding step, with no loss of precision in the addition. FMA is more accurate than performing the operations separately.

The theoretical single-precision processing power of a Fermi GPU in GFLOPS is computed as 2 (operations per FMA instruction per CUDA core per cycle) × number of CUDA cores × shader clock speed (in GHz). Note that the previous generation Tesla could dual-issue MAD+MUL to CUDA cores and SFUs in parallel, but Fermi lost this ability as it can only issue 32 instructions per cycle per SM which keeps just its 32 CUDA cores fully utilized.[2] Therefore, it is not possible to leverage the SFUs to reach more than 2 operations per CUDA core per cycle.

The theoretical double-precision processing power of a Fermi GPU is 1/2 of the single precision performance on GF100/110. However, in practice this double-precision power is only available on professional Quadro and Tesla cards, while consumer GeForce cards are capped to 1/8.[3]

L1 cache per SM and unified L2 cache that services all operations (load, store and texture).

Registers: Each SM has 32K of 32-bit registers. Each thread has access to its own registers and not those of other threads. The maximum number of registers that can be used by a CUDA kernel is 63. The number of available registers degrades gracefully from 63 to 21 as the workload (and hence resource requirements) increases by number of threads. Registers have a very high bandwidth: about 8,000 GB/s.

L1+Shared Memory: On-chip memory that can be used either to cache data for individual threads (register spilling/L1 cache) and/or to share data among several threads (shared memory). This 64 KB memory can be configured as either 48 KB of shared memory with 16 KB of L1 cache, or 16 KB of shared memory with 48 KB of L1 cache. Shared memory enables threads within the same thread block to cooperate, facilitates extensive reuse of on-chip data, and greatly reduces off-chip traffic. Shared memory is accessible by the threads in the same thread block. It provides low-latency access (10-20 cycles) and very high bandwidth (1,600 GB/s) to moderate amounts of data (such as intermediate results in a series of calculations, one row or column of data for matrix operations, a line of video, etc.). David Patterson says that this Shared Memory uses idea of local scratchpad[4]

Local Memory: Local memory is meant as a memory location used to hold "spilled" registers. Register spilling occurs when a thread block requires more register storage than is available on an SM. Local memory is used only for some automatic variables (which are declared in the device code without any of the __device__, __shared__, or __constant__ qualifiers). Generally, an automatic variable resides in a register except for the following: (1) Arrays that the compiler cannot determine are indexed with constant quantities; (2) Large structures or arrays that would consume too much register space; Any variable the compiler decides to spill to local memory when a kernel uses more registers than are available on the SM.

L2 Cache: 768 KB unified L2 cache, shared among the 16 SMs, that services all load and store from/to global memory, including copies to/from CPU host, and also texture requests. The L2 cache subsystem also implements atomic operations, used for managing access to data that must be shared across thread blocks or even kernels.