From Infogalactic: the planetary knowledge core
(Redirected from Ferrari 250 Testa Rossa)
Jump to: navigation, search
Not to be confused with Ferrari 500 TR or Ferrari Testarossa. 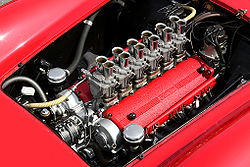 Named for the red valve covers, the original 250 TR had unorthodox bodywork by Scaglietti. The front fenders are visually separated from the central "nacelle" body, a design inspired by Formula One racers, with air ducting across the front brakes and out through the open area behind the wheels, this model is often called the "Pontoon" TR. Olivier Gendebien and Phil Hill won the 24 Hours of Le Mans with the pontoon bodywork replaced by more orthodox bodywork in 1958.

The 250 TR's aerodynamic "coke bottle" design was successful in racing but nonetheless controversial: Ferrari began changing the look soon after its production. Other, more conventional bodies were designed by Ferrari stalwarts, Pininfarina and Carrozzeria Touring. The engine had the same displacement as the rest of the 250 series but was tuned to produce far more power. The front styling of the 250 TR61 pictured served as inspiration to the Ferrari F430 road car.