The Ferrari 308 GTB berlinetta and targa topped 308 GTS are V8 mid-engined, 2-seater sports cars manufactured by the Italian company Ferrari from 1975 to 1985. The 308 replaced the Dino 246 GT and GTS in 1975 and was updated as the 328 in 1985. The similar 208 GTB and GTS were equipped with a smaller initially naturally aspirated, later turbocharged 2-litre engine, and sold mostly in Italy.

The 308 had a tube frame with separate body. The 308 GTB/GTS and GT4 were mechanically similar, and also shared much with the original Dino. Both 308s sit on the same tube platform, however the GT4—being a 2+2—has a longer wheelbase. The engine was a V8 of a 90 degree configuration, with belt-driven twin overhead camshafts per cylinder bank. It was transversely mounted in unit with the transaxle transmission assembly, which was below and to the rear of the engine's sump. All models used a fully synchromesh[2] 5-speed manual and a clutch-type limited slip differential. Suspension was all-independent, comprising double wishbones, coaxial coil springs and hydraulic dampers, and anti-roll bars on both axles; four wheel vented disc brakes were also fitted. Steering was unassisted rack and pinion.

The 308's body was designed by Pininfarina's Leonardo Fioravanti, who had been responsible for some of Ferrari's most celebrated shapes to date such as the Daytona, the Dino and the Berlinetta Boxer. The 308 used elements of these shapes to create something very much in contrast with the angular GT4. GTS models featured a removable roof panel with grained satin black finish, which could be stowed in a vinyl cover behind the seats when not in use.

The Pininfarina-styled Ferrari 308 GTB was introduced at the Paris Motor Show in 1975[3] as a supplement to the Bertone-shaped 2+2 Dino 308 GT4 and a direct replacement for the 2-seater Dino 246.

Its F106 AB V8 engine was equipped with four twin-choke Weber 40DCNF carburettors and single coil ignition. European versions produced 255 PS (188 kW; 252 bhp) at 6600 rpm (7700 rpm redline), but American versions were down to 240 PS (177 kW; 237 bhp) at 6,600 rpm due to emissions control devices. European specification cars used dry sump lubrication. Cars destined to the Australian, Japanese and US market were fitted with a conventional wet sump engine from the GT4.[3]

A notable aspect of the early 308 GTB was that, although still built by Carrozzeria Scaglietti, its bodywork was entirely made of glass-reinforced plastic (or GRP), allowing a very light weight of 1,050 kg (2,315 lb). This lasted until June 1977, when the 308 was switched to steel bodies, resulting in an overall weight increase of approximately 150 kg (331 lb). Standard wheels were 5-spoke 14-inch alloy. 16-inch wheels were made available later as an option, together with sports exhaust system, high compression pistons and high lift camshaft. 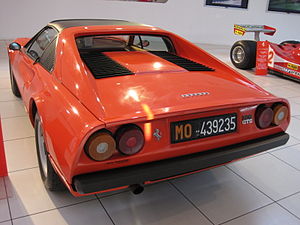 Tail of an early, single-exhaust GTS

At the 1977 Frankfurt Motor Show the targa topped 308 GTS was introduced.[4] Independently from the market, all GTS used a wet sump engine and were steel-bodied. European GTB models retained the dry sump lubrication until 1981. 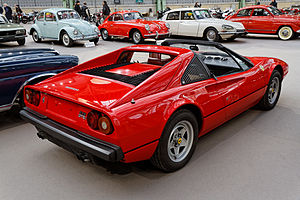 In 1980 Bosch K-Jetronic mechanical fuel injection was added on the 308 GTBi and GTSi; emissions decreased, at the price of a power drop to 214 PS (157 kW; 211 bhp) on European models and to 205 PS (151 kW; 202 bhp) on federalized models. The Bosch fuel injection system was coupled to a Marelli MED 803A Digiplex electronic ignition system, incorporating a coil, distributor and ignition module for each bank of cylinders.[6] Outside the car was identical to the 308 GTB/GTS, save for metric sized wheels of a slightly different design, fitted with Michelin TRX radial tyres—Michelin XWX on 16-inch wheels were optional. Inside the clock and oil temperature gauge were moved to the centre console; there were also a new black steering wheel with three perforated spokes, and seats of a different pattern. 494 GTBi and 1743 GTSi were produced before the model was succeeded by the 308 Quattrovalvole in 1982.[6][7]

Two years later, at the 1982 Paris Motor Show, Ferrari launched the 308 quattrovalvole, in GTB and GTS form.[8] The main change from the 308 GTBi/GTSi it succeeded were the 4-valves per cylinder—hence its name, quattrovalvole, literally "four valves" in Italian—which pushed output back up to 240 hp (179 kW) restoring some of the performance lost to the emission control equipment.

The new model could be recognized by the addition of a slim louvred panel in the front lid to aid radiator exhaust air exit, power operated mirrors carrying a small enamel Ferrari badge, a redesigned radiator grille with rectangular driving lights on each side, and rectangular (in place of round) side repeaters. The interior also received some minor updates, such as a satin black three spoke steering wheel with triangular centre; cloth seat centres became available as an option to the standard full leather. Available included metallic paint, a deep front spoiler, air conditioning, wider wheels, 16-inch Speedline wheels with Pirelli P7 tyres, and a satin black roof aerofoil (standard on Japanese market models).

Apart from the 32-valve cylinder heads, the V8 engine was essentially of the same design as that used in the 308 GTSi model. ITotal displacement was 2,926 cc (179 cu in), with a bore and stroke of 81 mm (3.2 in) x 71 mm (2.8 in). Output on European specification cars was 240 PS (177 kW; 237 bhp) at 7000 rpm, and 235 PS (173 kW; 232 bhp) at 6800 rpm for US specification variants. The gear and final drive ratios were altered to suit the revised characteristics of the four valves per cylinder engine. One other significant benefit of the QV four valve heads was the replacement of the non-QV models sodium valves which have been known to fail at the joint between the head and the stem.[citation needed] Bosch K-Jetronic fuel injection and Marelli Digiplex electronic ignition were carried over from the GTBi/GTSi. All US market examples were fitted with catalytic converters. 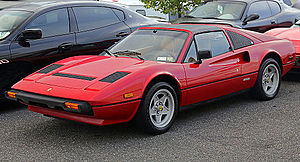 The 288 GTO introduced in 1984 is considered as the first Ferrari supercar. The 288 borrowed much of the styling from the European 308 GTB QV of the previous year, 1983: it is also powered by a similar debored 2.8-litre V8 (but with turbochargers), it retained the general bodywork lines with extended wheelarches, different side air vents, and bigger rear spoiler, longer (5 inch) wheelbase, and the central tubular space-frame chassis.

In 1980 Ferrari introduced a two-litre version of the 308, 208 GTB and 208 GTS. Though mainly for the domestic Italian market, where new cars with engines above 2-litres were subjected to a much higher value added tax, they were also listed in New Zealand. The 208 GTB/GTS replaced the 208 GT4 2+2.

In 1982 the two-litre 208 was succeeded by a turbocharged and fuel injected version, the 208 GTS turbo unveiled at the Turin Motor Show.[12] It was the first ever turbocharged road-going Ferrari.

The 208's engine was given a single KKK turbocharger with wastegate valve, Bosch K-Jetronic fuel injection and Marelli electronic ignition. Forced induction increased power to 220 PS (162 kW; 217 bhp) at 7000 rpm. A GTS version was introduced a year later, in 1983. 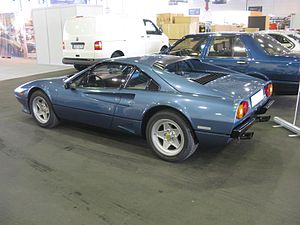 Both outside and inside the 208 Turbo was almost identical to the contemporary 308 Quattrovalvole. It could be recognized by NACA ducts in front of the rear wheel wheel openings and "turbo" badging on the tail and shrouded exhaust pipes; the normally optional deep front spoiler, black roof aileron were standard.

Among the typically yearly updates to the performance and style of the 308 throughout its run, cars from the same series would have a number of differences between them depending on their intended export market (which is usual for European cars). For example, a 308 destined for the American market would sport much larger heavier bumpers and a slightly sturdier frame (and many other smaller details) in order to meet more stringent US road safety standards. American market cars also suffered a performance hit due to a compression ratio of 8.6:1 vs 9.2:1 for most of the rest of the world state emissions legislation which reduced horsepower. As a result of these differences there is often a premium paid for the "purer" European spec car over the federalized car.

Some differences between the Euro-spec and US-spec cars are shown below:

The GTB/GTS has become one of the more recognizable and iconic cars produced by Ferrari to date. It was made famous on the television series Magnum, P.I.. Several 308 GTS cars were used, a new one for each season, most being auctioned off after filming. The first was a 1979 model with chassis number 28251.

The 308 models are embraced by Ferrari fans and critics today. In 2004, Sports Car International named this car number five on the list of Top Sports Cars of the 1970s. The European 308 GTB QV and 308 GTS QV models are considered by many to be the most collectible 308 due to its subtle styling (deep front valance, racing mirrors, short lightweight bumpers) and speed as the fastest of all 308s produced.