The Ferrari 312T was a Ferrari Formula One car design, based on the 312B3 from 1974. In various versions, it was used from 1975 until 1980. It was designed by Mauro Forghieri for the 1975 season and was an uncomplicated and clean design that responded to mechanical upgrades.

The 312T series won 27 races, four Constructors' and three Drivers' Championships, and was replaced for the 1981 season by the 126 C, Ferrari's first turbocharged F1 car.

The car was powered by the powerful and ultra reliable flat-12 engine which gave around 510 bhp. The T in the name stood for 'transverse', as the gearbox was mounted in this way, improving the car's handling characteristics, which had been the downfall of its predecessor. 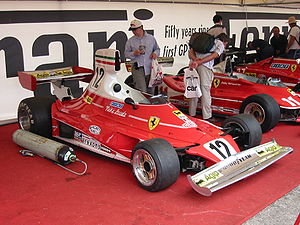 The development of the 312T began in 1974, as it became apparent that problems with the handling of the then current 312B3 chassis could not be solved, and a radical re-think was required.[1] As with all Ferrari F1 cars of this era, the design of the new model was led by Mauro Forghieri.

The car was constructed with aluminium panels over a tubular steel spaceframe, as was typical in F1 at the time,[2] but featured a large number of new design features, the most interesting of which was the transverse-mounted gearbox – the T in the car's name stood for Trasversale. The gearbox design allowed it to be positioned ahead of the rear axle, in order to give a low polar moment of inertia. The suspension was also significantly different from that of the 312B3, and the front of the chassis was much narrower. The handling of the car was found to be inherently neutral, not suffering from the persistent understeer which blighted the 312B3. Niki Lauda tested the car extensively during the off season, ready for a full-on championship challenge.

The first 312T was completed in the autumn of 1974, and unveiled to the press in Modena after the end of the 1974 season. However, the team used the old 312B3 at the first two races of the 1975 season, and it was not until the South African Grand Prix the 312T received its race debut. The car's performance at its debut race was disappointing, with Clay Regazzoni's car being set up incorrectly, and Niki Lauda's suffering from a lack of power. A subsequent test of Lauda's engine proved that there was a technical problem.[1]

The 312T was tested alongside the 312B3 at Fiorano, proving conclusively that the newer car was faster, and indeed it went on to win its next race, the non-championship International Trophy race, with Lauda at the wheel. In the world championship, after the slow start to the season in which Brabham, Tyrrell and McLaren put up strong competition, Lauda won 4 out of 5 races mid season before snatching the title at Monza by finishing third, whilst Clay Regazzoni's win in that race secured Ferrari its first Constructors' Championship since 1964. Lauda went on to win the US Grand Prix at season's end, confirming Ferrari's superiority in 1975.

The Formula 1 technical regulations were changed for the 1976 season – from the Spanish Grand Prix in May, the tall air boxes which had become popular would be banned. The rules therefore allowed Ferrari to continue to use the 312T for the opening 3 races of the 1976 season (Lauda won the first two and Regazzoni the third), before the introduction of its successor, a revised version called the 312T2. 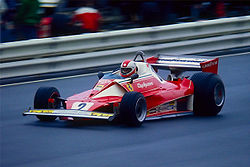 The 312T2 was launched at Fiorano and featured a number of modifications over the 312T.[4] In order to comply with the revised aerodynamic rules, the car no longer featured an airbox behind the cockpit. Instead "NACA shaped" air intakes were incorporated into the cockpit sides, feeding air into each cylinder bank of the flat 12 engine. At 2560mm, the wheelbase was 42mm longer than that of the 312T.[5] At the time of launch, the car also featured some notable mechanical modifications, including a de Dion rear suspension arrangement, although this was abandoned after extensive testing, in favour of a more conventional suspension set up.[4]

The 312T2 was given its race debut at the non-championship Brands Hatch Race of Champions in March 1976 and was first used in a world championship race in May at the Spanish Grand Prix. The 312T2 was, if anything, more successful than the 312T. Lauda was comfortably leading the world championship after another 3 wins, when at the 1976 German Grand Prix at Nürburgring he had a massive accident caused by a suspected rear suspension failure. In the aftermath he nearly burned to death, but was miraculously back to racing just 6 weeks later. Lauda conceded the title by just a single point to James Hunt, but the 312T2's superiority helped Ferrari win its second consecutive constructors' title.

The 312T2 was also used for the 1977 season. At the early races the cars were little different from the 1976 specification cars, indeed two of the 1976 cars (chassis 026 and 027) were used in the early races.[3] One of the few visible changes was the addition of Fiat logos to a Ferrari F1 car for the first time. Lauda was unhappy with the performance of the car at the first two races of 1977, and led an extensive test programme to develop the car in the weeks between the Brazilian and South African grands prix.[4] These tests resulted in the introduction of several changes to the car, including a new rear wing, revised bodywork and suspension. Lauda went on to win the South African race, albeit in tragic circumstances, his car heavily damaged by debris from Tom Pryce's fatal accident.

Over the course of the season, three new cars were constructed (chassis numbers 029,030 & 031) and the car's development continued.[3] Several different noses and rear wing profiles were used, some especially tailored for specific circuits, and numerous changes were made to the suspension and rear bodywork. One of the problems Ferrari had with the 312T2 in 1977 was that the Goodyear tyres were increasingly unsuited to the car. As Goodyear continued to develop the tyres to cope with the high downforce of the Lotus 78, it became more difficult for the Ferrari (with less downforce) to build up sufficient tyre temperatures.

However, despite its problems, the 312T2 was good enough to win the Drivers' Championship for Lauda, who won more through the car's reliability than outright speed. He took 3 wins, while Reutemann won once. The Constructors' Championship was also secured for a third successive season before Lauda walked out on the team before season's end. He was replaced by the fiery Canadian Gilles Villeneuve but Villeneuve could not get a handle on the T2B, as its neutral handling did not suit his oversteering driving style.

The 312T3 was introduced for Villeneuve and Reutemann at the third race of the 1978 season.

The car featured the same flat 12 engine as had been used since 1970, albeit tuned to give around 515 bhp. The chassis was completely new, with a new monocoque structure and a different suspension arrangement, designed to work with the Michelin tyres. The bodywork visibly very different, with a flatter top to the body, allowing improved air flow to the rear wing.

All the hard work came to nothing though as the pioneering Lotus 79 ground effect "wing car" took on and beat all comers with ease that season, and Ferrari were left to pick up the pieces of any Lotus failures. Reutemann won 4 races, whilst Villeneuve won for the first time at the final race, his home race in Canada, but it was more a season of consolidation. Reutemann moved to Lotus for 1979, replaced by Jody Scheckter. Ferrari was 2nd in the Constructors' Championship.

In 1979, a significant amount of progress was made in aerodynamics and to challenge Lotus, Forghieri realised he had to follow their lead and design a ground effect car for 1979. The 312T4, introduced at the 1979 South African Grand Prix was closely based on the 312T3. Its origins placed restrictions on the aerodynamic design since the T series had never been designed with ground effect in mind. The 312T4 monocoque was designed to be as narrow as possible, to take advantage of ground effects, but this was limited by the width of the flat 12 engine.

Scheckter was given the 312T4 car he drove to his championship after the new 312T5 was ready to be debuted in Argentina in 1980. He still owns it, and ran it at the 2010 Bahrain Grand Prix weekend to celebrate the 60th anniversary of Formula One along with every living Formula One world champion (except for Nelson Piquet and Kimi Räikkönen).[6]

The 1980 season saw further aerodynamic progress by Cosworth DFV teams, and a heavily updated version of the 312T4, the 312T5 was introduced at the start of the season. The Ferrari was totally outclassed as their wide 312 "Boxer" engine did not suit the aerodynamic needs. The car was unreliable, slow and was not effective against the competition. The other constructors' cars got better throughout the season whereas the 312T5's development virtually went nowhere – the car became less and less competitive over the season. For the first time since 1973, Ferrari did not win a race for an entire season, and the team finished 10th in the Constructors' Championship. Scheckter even failed to qualify in Canada and, after only managing 2 points, retired from the sport at the end of the year.

The six-wheeled 312T6 used four tyres at the rear, specially developed for the purpose. It was one of a few six-wheeled designs during that period, although Tyrrell's P34 was the only example which raced. The car followed in the footsteps of the Tyrrell P34, but instead of four smaller front wheels, the T6 used 4 normal sized rear wheels on one rear axle.[7]

The car was tested by both Niki Lauda and Carlos Reutemann in 1977, but never raced. Quite apart from the fact that it was far wider than the regulations permitted it also proved a challenge to drive. During one test at Ferrari's Fiorano test track Reutemann crashed the car then it burst into flames on his 12th lap of testing, and suffered a rear upright failure on another occasion.[citation needed] Needless to say the Argentinean was not impressed.[8]

Following the 312T6 experiment articles appeared in the Italian press with pictures and illustrations depicting a secret Ferrari Formula 1 car, dubbed the 312T8. They showed four wheels at the front, like the Tyrrell P34, and another four at the rear, like the March 2-4-0. The idea was evidently crazy and no such car ever materialised. Many years later, these pictures were revealed to be a mock up, released by Ferrari itself (although not officially) to keep attention high.[9][10]