The Ferrari Challenge is a single-marque motorsport championship that was created in 1993 for owners of the 348 Berlinetta who wanted to become involved in racing. It now encompasses three official championships in the United States, Asia-Pacific, and Europe.[1] Competitors from each series are brought together at the annual World Finals (Finali Mondiali) event. Since 2007, the Ferrari Challenge exclusively used the Ferrari F430 model. But in 2010 the 458 Challenge was revealed ready for the 2011 season. Today, both the 458C and F430C are used in the series, however the F430 is gradually being phased out by the competitors due to the 458C's superior performance (2 seconds quicker around Fiorano). Most of the Challenge grids now consist entirely of 458C's. 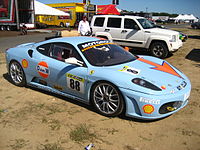 Currently there are three distinct series, but in 2001, the number of championships peaked at five, with three in Europe, one in the United States, and one in Japan.[2] Since 2001, the Ferrari Challenge is managed by Ferrari's Corse Clienti department ("customer racing").

The now defunct Ferrari Challenge Italy used a two-class format in which distinguished between professional competition drivers in the Trofeo Pirelli (lit. "Pirelli Trophy") and amateur "gentleman drivers" in the Coppa Shell (lit. "Shell Cup").[3] This format has now been transferred to the Europe Challenge series. It was originally launched in 1993, with backing from Pirelli. Its popularity has resulted in a 2007 entry list of ten teams represented by 37 drivers. The Challenge Italy series is now merged with the European Challenge-series.[4][5]

Like the Challenge Italy, the European series is a two-class championship. For the 2012 calendar it contains 7 races, with 4 of them being held on Italian circuits. This is done in sync with the Italian series now merged into the European. The remaining 3 races are held at Hungaroring, Spa-Francorchamps, and Silverstone.[6] The European Challenge is by far the largest series, with between 50–55 entrants for the 2012 season. 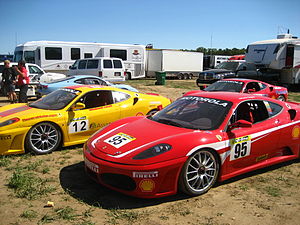 The North American also features the Trofeo Pirelli and Coppa Shell class system.[7] This championship was inaugurated in 1994. It is organized by Ferrari North America and sanctioned by Grand Am.[8] The 2012 season consists of 7 events in the US and Canada. The 2012 grid of the FCNA includes 20 drivers, making it the smallest Challenge-series worldwide in terms of entrants.

The Asia Pacific is the most recent of the Challenge series since the 2011 season, inaugurated in combination with the growing interest and sales for Ferrari in Asia. The season encompasses events in Japan, China, Malaysia and Singapore. The Asia Pacific also features the Trofeo Pirelli and Coppa Shell class system. Grid is made up of 35 to 40 drivers for the 2012 season.

The Ferrari Challenge has inspired other national club-level championships that are not affiliated with Ferrari S.p.A. itself. The 'Ferrari Scandinavia Challenge' is an unofficial championship with events in Sweden, and Denmark. It was created in 2001 and is not exclusive to the latest Challenge cars, with many classes so that models all the way back to the 348 are eligible for entry.[9] The UK has a similar unofficial series comprising three championships for older cars that is organised by the Ferrari Owners' Club.[10] In recent years, a club championship open to all Challenge cars har been organized in the US under the name of Ferrari Club Racing Championship/Association as an alternative to the Ferrari Challenge North America, which many competitors felt was too expensive. The FCRA hosts 6 rounds during a season.[11]

A brand new 458 Challenge will cost around $300,000 in the US. The only options available on the car is the color and size of the passenger seat. All new 458C's come delivered on rain tyres. Racing in the Ferrari Challenge North America series will cost roughly around $15,000–$20,000 per race weekend if the car is run by a dealer team, which they in most cases are. This includes crew support, a fee to Ferrari North America, transportation and living costs plus additional spares. The fee to FNA is approximately $2,000–$3,000 which gives the competitors fuel and tires. Privateer entries can be run at a slightly smaller cost as there will be no dealer fee included.[12] 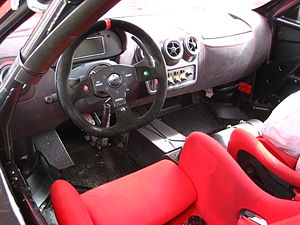 The cockpit of a F430 Challenge carries only basic racing necessities. 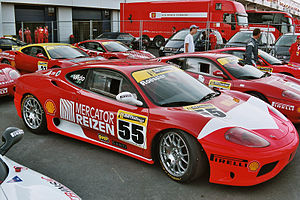 The Ferrari Challenge uses a single model from the manufacturer's road car range, suitably modified to make them safe for competition use. The lineage began with the 348 Berlinetta in 1993, followed by its successor, the F355 Berlinetta, and the 360 Modena was introduced in 2000. The F355 remained eligible during 2000 and 2001.[2] The 360CS (Challenge Stradale) version was the first competition-orientated version to be marketed to the public. The F430 Challenge was phased in during a transitional year in 2006, with the same being the case for the 458 Challenge in 2011.[13] The F430 introduced carbon-ceramic brake discs for the first time and gained 80bhp over the 360CS, which has reduced lap times to approximately three seconds shy of the F430 GT2.[3] The current 458 Challenge is the first to have driver controlled aids such as traction control, stability management and adjustable ABS brakes.[14]

The 458 Challenge is the most recent in a line of Ferraris used in the Ferrari Challenge series. The lineage is as follows:[15]

Racing simulators based on the series