The Ferrari 365 GTB/4, better known by the unofficial name Ferrari Daytona, is a grand tourer automobile produced from 1968 to 1973. It was first introduced to the public at the Paris Auto Salon in 1968 and replaced the 275 GTB/4. The Daytona was replaced by the mid-engined 365 GT4 Berlinetta Boxer in 1973.

Unlike Lamborghini's then-new, mid-engined Miura, the Daytona was a traditional front-engined, rear-drive car.

The five-speed manual transmission (of the transaxle concept) was mounted in the rear for optimal weight distribution, and a four-wheel independent suspension[5] featured wishbones and coil springs.

Although it was also a Pininfarina design, as with many previous Ferrari road cars (by Leonardo Fioravanti),[6] the 365 GTB/4 was radically different. Its sharp-edged styling resembled a Lamborghini more than a traditional Pininfarina Ferrari.

Early Daytonas featured fixed headlights behind an acrylic glass cover. This particular setup was completely abandoned in 1971 favor of retractable pop-up twin headlights due to new safety regulations in the U.S., which outlawed headlights behind covers. Leonardo Fioravanti, designer, interviewed on TV car show had confirmed a popular rumor that it took him 7 days to design a Daytona. 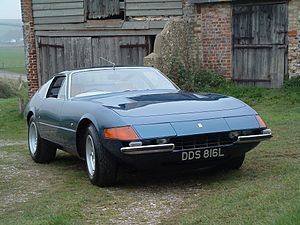 The generally accepted total number of Daytonas from the Ferrari club historians is 1,406 over the life of the model. This figure includes 158 UK right-hand-drive coupés, 122 factory-made spyders (of which 7 are right hand drive), and 15 competition cars in three series with modified lightweight bodies and in various degrees of engine tune. All bodies except the first Pininfarina prototype were produced by Italian coachbuilder Scaglietti, which at the time already had a reputable record of working with Ferrari.[7]

Historically, and especially since the mid-1980s and early 1990s, there has mostly been a considerable market price difference between a real berlinetta and a real spyder. Many berlinettas were turned into spyders by aftermarket mechanics, often to increase the car's monetary value or simply because of the owner's preference for an open car. Differences in value have typically remained, however, even after the most skillful conversions. No Berlinettas were converted into Spyders by Scaglietti, Ferrari would not allow this, then or now.[citation needed] 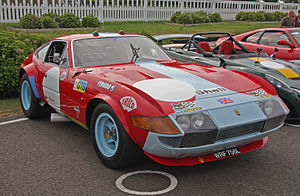 The first racing version of the 365GTB/4 was prepared in 1969: an aluminium bodied car was built and entered in the Le Mans 24-hour race that year (the car crashed in practice). Ferrari did not produce an official competition car until late in 1970.[8]

The cars were not raced by the official Scuderia Ferrari team, but by a range of private entrants. They enjoyed particular success in the 24 Hours of Le Mans, with results including a 5th overall in 1971, followed by GT class wins in 1972, 1973 and 1974. In 1972 Ferrari 365 GTB/4s took the first 5 places of the GT class.

The final major success of the car was in 1979 (five years after production ended), when a 1973 car achieved a class victory (2nd overall) in the 24 Hours of Daytona.

In 1971, the Daytona gained notoriety when one was driven by Dan Gurney and Brock Yates in the inaugural Cannonball Baker Sea-To-Shining-Sea Memorial Trophy Dash. Showcasing the car's potential for sustained high speed travel, the pair won with an average speed of 80.1 miles per hour (129 km/h), completing the distance from New York to L.A. in 35 hours 54 minutes (2,876 miles (4,628 km)). Gurney was later quoted as saying "We never once exceeded 175 miles per hour."

In the 1980s, the car gained new notoriety on the first two seasons of NBC's hit television series Miami Vice. The black car used in the series was a replica built on a Corvette chassis. Ferrari execs were not pleased[citation needed] that their company and one of their products was represented on TV by an imitation car and sued[citation needed] the manufacturer of the kit for trademark infringement and trademark dilution.The Daytona replica was eventually destroyed on-screen and replaced with a donated Ferrari Testarossa, the company's newest model during the time.

In 2004, the Daytona was voted top sports car of the 1970s by Sports Car International magazine. Similarly, Motor Trend Classic named the 365 GTB/4 and GTS/4 as number two in their list of the ten "Greatest Ferraris of all time".