The F140 engine family is a series of 65° DOHC V12 petrol engines produced by Ferrari since 2002, and used in both Ferrari and Maserati cars. This engine was derived from the already extant Ferrari/Maserati V8.[citation needed] In the Ferrari Enzo, it had set the record for the most powerful naturally aspirated engine in a road car. The 5998 cc engine, designed for the Enzo, is known within Ferrari as the Tipo F140B, whereas the very similar Tipo F140C engine displaces 5999 cc and was designed for the Ferrari 599 as the most powerful series-production Ferrari engine. This engine is also used in Maserati Birdcage 75th. 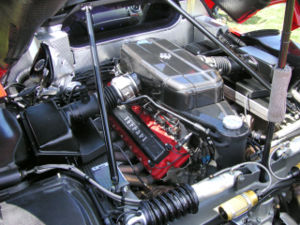 In 2013 the F140 FC V12 engine used in the Ferrari F12berlinetta was awarded "Best Performance Engine" and "Above 4.0 litre" recognitions in the annual International Engine of the Year competition.[1]