Ferrol (Galician pronunciation: [feˈrɔl]), is a city in the Province of A Coruña in Galicia, located on the Atlantic coast in north-western Spain. According to the 2014 census, the city has a population of 70,389 making it the 5th largest settlement in Galicia. With Eume to the south and Ortegal the north, Ferrol forms the Ferrolterra conurbation, the third largest in Galicia which has a total population of over 203,444.

The city has been a major naval shipbuilding centre for most of its history, being the capital of the Spanish Navy's Maritime Department of the North since the time of the early Bourbons. Before that, in the 17th century, Ferrol was the most important arsenal in Europe. Today, the city is also known as the home of the shipbuilding yards of Navantia.

The first historical mention of this settlement, then called Adobrica, is in the history of Pomponius Mela, a Roman historian who wrote in the year AD 43 detailing a description of the Portus Magnus Artabrorum, the "great port of the Artabri". The current toponym Ferrol, though, can only be traced back to the Middle Ages; a document of 1087 instances sancto Iuliano de Ferrol, where Ferrol is probably the local evolution of the genitive form of the Latin name Ferreolus; Ferrol was probably, in origin, the estate of one Ferreolus.[1] In 1982 the government of Spain adopted officially Ferrol in consonance with its long history and tradition.[2]

Alternately. the origin of the name comes from the legend of a Breton saint, Ferreol, who arrived here on a ship, amid a chorus of seven siren.[citation needed] Another tradition says that Ferrol proceeds from farol, alluding to the heraldic figure that appears on the coat of arms of the city.[3] However, according to experts, the origin of the arms of Ferrol goes back only to the eighteenth century, and there are also several variants used over time, without having been set in accordance with the applicable legislation since the 1990s.[4] The combination of two .words that can mean either 'port - close', 'landing on pillars'[citation needed] or a Ferreoli Domini, "the lord of Ferreol" veiled allusion to the town, which could have had a temple under the patronage of St. Ferreol. 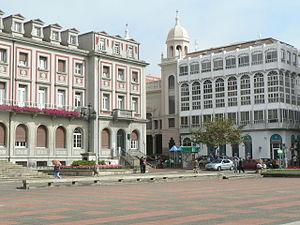 The centre of Ferrol 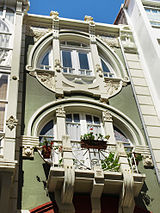 The existence of prehistoric human settlements in this Galician city is backed up by the abundance of burial chambers, megalithic monuments as well as Petroglyphs and other archaeological findings. The Phoenicians established in this area different dried and salted cod stations and their presence together with the presence of the Ancient Greeks is well documented by historians like Herodotus amongst others. In Roman times, in the 1st century BC, a fishing port existed in the bay of Ferrol. After the fall of the Western Roman Empire the whole Iberian Peninsula, including Ferrol, was raided by the Vandals and incorporated in 411 to the Suebic Kingdom of Galicia; their kingdom was incorporated in 584 by Leovigild to the Visigothic Kingdom.[5]

The castle of San Felipe secures the entrance of the harbour

Ferrol served as a strategic safe port during the Hundred Years' War, sided the House of Trastamara during the Castilian Civil War and as a personal reward to Fernan Perez de Andrade, in 1371, Henry II gave the town to the powerful Andrade family.[6]

In 1568[7] a fire reduced to rubble the old medieval town; in the same period some parts of the existing fortifications at the entrance of the estuary were built.[8] As a naval base, at that time the town was considered more important as a Royal Arsenal than as a safe harbour.

With the arrival of the Bourbons in the 18th century, Ferrol became a leading naval centre.[9] Ferrol was made Capital of the Maritime Department of the North, formed under Ferdinand VI and Charles III for the defence of the Spanish Colonial Empire in America. Rapid improvements followed, notably under the leadership of the Marquis of Ensenada, and the position of Ferrol was made almost unassailable from the sea, the difficulties of disembarking troops on its precipitous coast being strengthened by a renewed line of fortresses and newly built castles, including that of San Carlos.

The Royal Dockyards of A Graña and Ferrol, built between 1726–1783,[10] produced ships protected with copper sheets from the rolling mills of Xubia. In 1772, The Spanish Royal Academy of Naval Engineers of Ferrol, the first such academy in Spain, was created.

Ferrol was virtually impossible to blockade in the age of sail, as strong westerly winds would take any blockading force away along the treacherous north coast of Spain where they had no safe haven. The geography of Ferrol meant that an entire Spanish fleet could slip out on a single tide. By the time the British were able to resume the blockade, the Spanish would be safely away and out to sea. Despite these advantages, a decline set during the reign of Charles IV, and in 1800, during the Ferrol Expedition (1800), after the defences had been reduced, a British fleet of 109 vessels landed troops on the beach of Doniños to take the Castle of San Felipe. Although only equipped with meagre artillery, the castle's small defence force under the command of Count Donadio together with a sizable number of volunteer citizens of Ferrol, successfully resisted the attack and the fleet withdrew. The alliance with the United Kingdom during the Peninsular War of 1808–14 failed to prevent the deterioration in the town’s fortunes. The arsenals and fortresses were abandoned and they were easily occupied by the French in 1809. 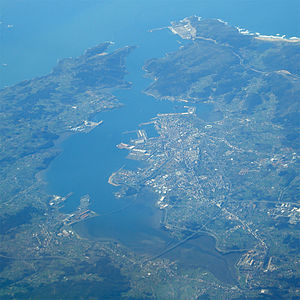 Under Ferdinand VII, Ferrol lost its title of capital. New activities sprang up, however, in the mid-19th century, during the administration of the Marquis de Molina,[11] Spanish Minister for Naval affairs, which included amongst other political successes the construction and launch in the Royal Dockyards of Ferrol of Spain's first steam propelled ship in 1858.

The second half of the 19th century brought to the Royal Dockyards of Ferrol not just plenty of work but social and political tensions which ended up in the failed republican uprising of 1872.[12]

Ten years after the Spanish–American War of 1898,[13][14] in which Spain lost Cuba and the Philippines, the Antonio Maura Government, in an attempt to restore the Spanish Navy and Spanish shipbuilding industry hired the Spanish Society for Naval Construction, whose major investors were the British firms John Brown, Vickers and Armstrong[15] the shipbuilding yards, workshops, foundries and dry docks in Ferrol.

For a period of sixteen years, all the technicians were exclusively British, and the situation was not altered till 1925 when the management was taken over by Spanish engineers, as one of the new policies introduced by the then newly created government, including ministers both civil and military, of the dictator Miguel Primo de Rivera (1923–1930). The arrival of the British coincided with the construction of a local electric-powered trolley streetcar's line (1924–1961).[16]

In sight of the outbreak of the Spanish Civil War, and because there was fear of social unrest in the naval station, the Foreign Office in London,[17][18] organized a ship to repatriate all the remaining British citizens and on 22 July 1936 HMS Witch (D89)[19] departed from Ferrol back to Britain. At the outbreak of the Spanish Civil War (1936–1939) the shipbuilding yards, workshops, foundries and dry docks in Ferrol were taken over by the state and fully nationalized in 1945 under the name "Bazán", later renamed "IZAR", and, starting from January 2005, Navantia. The town was the birthplace of dictator Francisco Franco, after whom the city was officially known as El Ferrol del Caudillo from 1938 to 1982. The end of the dictatorship and the arrival of democracy in 1978 did not help Ferrol,[20][21] and from 1982 to the early 1990s, the city confronted numerous problems due to a decline in the naval sector. The beginning of the new millennium however has been a time of economic expansion and prosperity in general.[22] A new motorway and an outer-port[23] have been built.

As in most of Galicia, Ferrol climate is a humid oceanic climate, characterised by year-long mild temperatures, rainy winters, and relatively dry summers. 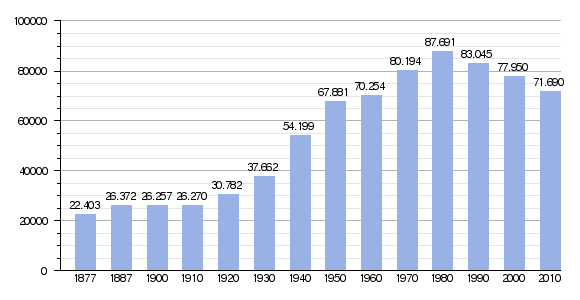 Ferrol is twinned with: