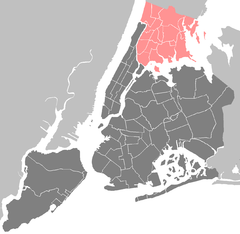 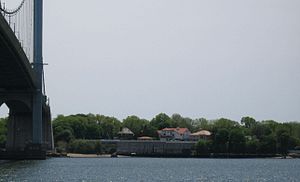 Ferry Point Park is a 413.8 acres (167.5 ha) park in the Bronx, New York and the site of the Bronx-Whitestone Bridge across the East River. The park site is a peninsula projecting into the East River roughly opposite the College Point and Malba neighborhoods of Queens. The park is adjacent to the Ferry Point mixed neighborhood (residential, commercial and retail) of Throggs Neck. The park is operated by the New York City Department of Parks and Recreation. The Hutchinson River Parkway crosses the park to the Bronx-Whitestone Bridge, splitting it into east and west sides.

The east side has a new golf course, Trump Ferry Point, community park and waterfront promenade. The east side borders are Saint Raymond's Cemetery; Balcom Avenue, Miles Avenue and Emerson Avenue; and the East River and the Bronx Whitestone Bridge.

The west side is heavily used for soccer, cricket, fishing and barbecues. Friends of Ferry Point Park holds cleanup events, plantings and helps care for the 3000 trees planted in the park as the Ferry Point 9/11 Memorial Grove[1] and 9/11 Living Memorial Forest.[2] These trees were donated by the Prince of Monaco.

Westchester Creek which borders the east side of this large park has a history which leads to the development of the Bronx Whitestone Bridge and therefore the Park itself. By the late 19th century Throggs Neck had developed into a fashionable public summer resort, which also contained large German beer gardens, to which the residents of Yorkville, Manhattan arrived by steamboat service up the East River. The 19th-century steamboat landing at Ferris Dock on Westchester Creek stood at present-day Brush Avenue north of Wenner Place; the road to it bore the name of the steamboat Osseo. The Ferris family were 18th-century residents, whose Ferris Point (Ferry Point) at the southeast corner of Throggs Neck neighborhood now supports the Hutchinson River Parkway (formerly Ferris Avenue) overhead ramp to the Bronx-Whitestone Bridge and Ferry Point Park. The first house to be built in the Bronx 1687 was reportedly the Charlton Ferris House along Ferris Avenue between Wenner Place, Brush Avenue and Lafayette Avenue. Situated on the estate of Albert L. Lovenstein. This is according to the G.W. Bromley Maps of 1900 and 1927.There is presently a Ferris Family house located on the nearby campus of Monsignor Scanlon High School (used as a residence by the Convent for many years and then as an alumni house it is empty now).

Two of several other large and handsome 18th-century Ferris houses in the neighborhood lasted until the 1960s, when the James Ferris house overlooking Eastchester Bay was hastily demolished in 1962 and the Watson Ferris house was demolished in 1964 by its occupants, the Tremont Terrace Moravian Church. The James Ferris house had been commandeered by Admiral Richard Howe as his headquarters in October 1776, when James Ferris was sent to the prison hulks in New York harbor, where he died in 1780. (Commac) street was nearby and parallel to Osseo and later demapped as well. NYC sold this 6 acres to be developed and it is a truck parking facility as of 2012. Wenner Place terminated at Westchester Creek and for many generations was used as a boat launch. NYC cut off the access to this Creek as it sold off the waterfront to developers. Neighbors are advocating for a boat launch at the nearby east side of this park and a kayak launch on the west side.

In 1937, New York City acquired the land for Ferry Point park in preparation for the construction of the Bronx-Whitestone Bridge.[3] The land had belonged to the Roman Catholic House of the Good Shepherd. The original 171 acres (69 ha) parcel was called 'Old Ferry' and was located at the confluence of the Westchester Creek and the Baxter Creek Inlet. Baxter Creek later became the East side of the park when it was filled in by landfill. In the 1930s, New York City Parks Commissioner Robert Moses planned a beach, bathhouse, cafeteria complex, bus terminal and parking field for the site, but none were ever built. The landscaped West side parkland was opened to the public in 1940.[4] In 1948, 243 acres (98 ha) were added to the park by condemnation, bringing it to its current land area. While the West side was well utilized by churches, schools, and visitors from Parkchester, Castle Hill and Throggs Neck apartments,The East side underwent years of raw garbage Landfill under the authority of the Department of Sanitation (began in 1952 and continued until 1970).

The east side of Ferry Point Park is equipped with sports fields, basketball and handball courts.[5] The west side has barbecue areas, 8 soccer fields, 2 cricket fields and the 9/11 Living Memorial Forest and Hilltop Grove.

Early 2000's plans for revitalizing Ferry Point Park included an 18-hole golf course and an adjacent Community Park and Waterfront Promenade were developed by the New York City Department of Parks and Recreation. The adjacent parks were design by Thomas Balsley Associates and the golf course was designed by Jack Nicklaus in collaboration with John Sanford.[6] LAWS Construction Corporation built the Community Park (opened in 2012) and golf course (opened in 2015). The Trump Organization received the City's concessionaire contract to grow-in/maintain the golf course and run the general golf operations.[7] The Community Park includes new baseball field, basketball court, playground, trails and comfort station. The proposed Waterfront Promenade plans include comfort station, panic areas, trails and the ecological revitalization of the waterfront on the east side near the East River Crescent area. Although there is much ado about the absence of construction on the comfort station on the west side, thousands of weekly visitors do not have running water nor a restroom...yet...[8][9]

The New York City Bus-operated Q44 and the MTA Bus-operated Q50 bus lines stop near Ferry Point Park. Additionally, the park is accessible from the Bronx–Whitestone Bridge for all other vehicles.