From Infogalactic: the planetary knowledge core
Jump to: navigation, search
This article is about the December holiday. For other uses, see Festivus (disambiguation).

Festivus is both a parody and a secular holiday celebrated on December 23 that serves as an alternative to participating in the pressures and commercialism of the Christmas season. It has been described as "the perfect secular theme for an all-inclusive December gathering".[1]

Originally a family tradition of scriptwriter Dan O'Keefe, who worked on the American sitcom Seinfeld, Festivus entered popular culture after it was made the focus of the 1997 episode "The Strike".[1][2] The holiday's celebration, as it was shown on Seinfeld, includes a Festivus dinner, an unadorned aluminum Festivus pole, practices such as the "Airing of Grievances" and "Feats of Strength", and the labeling of easily explainable events as "Festivus miracles".[3]

The episode refers to it as "a Festivus for the rest of us", referencing its non-commercial aspect. It has also been described both as a "parody holiday festival" and as a form of playful consumer resistance.[4]

Festivus was conceived by editor and author Daniel O'Keefe and was celebrated by his family as early as 1966. In the original O'Keefe tradition, the holiday would take place in response to family tension, "any time from December to May".[5] The phrase, "a Festivus for the rest of us", also derived from an O'Keefe family event, the death of Daniel O'Keefe's mother.[5]

In 1982, Daniel O'Keefe wrote a book, Stolen Lightning: The Social Theory of Magic, that deals with idiosyncratic ritual and its social significance, a theme relevant to Festivus tradition.[6]

The word Festivus in this sense was coined by O'Keefe, and according to him the name "just popped into my head".[1] The English word festive derives from Latin "festivus", which in turn derives from festus "joyous; holiday, feast day".[7][8][9]

Although the first Festivus took place in February 1966, as a celebration of Daniel O'Keefe's first date with his future wife, Deborah,[1] it is now celebrated on December 23, as depicted in a Seinfeld episode written by O'Keefe's son.[2]

Festivus was introduced in the Seinfeld episode "The Strike", written by Daniel O'Keefe's son Dan O'Keefe. The episode revolves around Cosmo Kramer (Michael Richards) returning to work at H&H Bagels. First, while at Monk's Restaurant, Jerry, George and Elaine discuss George's father's creation of Festivus.[3] Then Kramer becomes interested in resurrecting the holiday when, at the bagel shop, Frank Costanza (Jerry Stiller) tells him how he created Festivus as an alternative holiday in response to the commercialization of Christmas.[3]

Frank Costanza's son, George (Jason Alexander), creates donation cards for a fake charity called The Human Fund (with the slogan "Money for People") in lieu of having to give office Christmas presents. When his boss, Mr. Kruger (Daniel von Bargen), questions George about a $20,000 check he gave George to donate to the Human Fund as a corporate donation, George hastily concocts the excuse that he made up the Human Fund because he feared persecution for his beliefs—for not celebrating Christmas, but celebrating Festivus. Attempting to call his bluff, Kruger goes home with George to see Festivus in action.[3]

Kramer eventually goes back on strike from his bagel-vendor job when his manager tells him he cannot have time off for his new-found holiday. Kramer is then seen on the sidewalk picketing H&H Bagels, carrying a sign reading "Festivus yes! Bagels no!" and chanting to anyone passing the store: "Hey! No bagel, no bagel, no bagel..."[3]

Finally, at Frank's house in Queens, Jerry, Elaine, Kramer, and George gather to celebrate Festivus. George brings Kruger to prove to him that Festivus is real.[3] 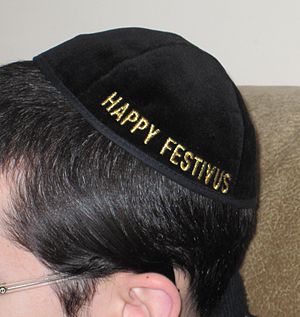 "Happy Festivus" embroidered on a yarmulke.

The holiday, as portrayed in the Seinfeld episode,[1][10] includes practices such as the "Airing of Grievances", which occurs during the Festivus meal and in which each person tells everyone else all the ways they have disappointed them over the past year. After the meal, the "Feats of Strength" are performed, involving wrestling the head of the household to the floor, with the holiday ending only if the head of the household is actually pinned.[3]

In the episode, the tradition of Festivus begins with an aluminum pole. Frank Costanza cites its "very high strength-to-weight ratio" as appealing. During Festivus, the pole is displayed unadorned. According to Frank, "I find tinsel distracting."

Dan O'Keefe credits fellow Seinfeld writer Jeff Schaffer with introducing the concept. The aluminum pole was not part of the original O'Keefe family celebration, which centered around putting a clock in a bag and nailing it to a wall.[11] 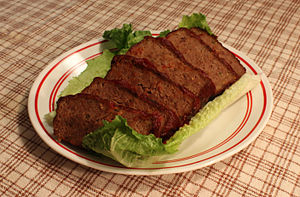 Some Festivus celebrants emulate the colors shown in the Seinfeld series by serving meatloaf placed on a bed of lettuce.

In "The Strike", a celebratory dinner is shown on the evening of Festivus prior to the Feats of Strength and during the Airing of Grievances. The on-air meal shows Estelle Costanza serving a sliced reddish colored meat-loaf shaped food on a bed of lettuce.[12] In the episode no alcohol is served at the dinner, but George's boss, Mr. Kruger, drinks from a hip flask.[3]

The original holiday dinner in the O'Keefe household featured turkey or ham as described in Dan O'Keefe's The Real Festivus.[13]

The celebration of Festivus begins with the "Airing of Grievances", which takes place immediately after the Festivus dinner has been served. In the television episode, Frank Costanza began it with the phrase, "I got a lotta problems with you people, and you're going to hear about it!" It consists of each person lashing out at others and the world about how they have been disappointed in the past year.[14]

Cosmo Kramer twice declares a "Festivus Miracle" during the Festivus celebration in the Costanza household. It is the character Kramer that actually causes the occurrence of two "miracles" by inviting two off-track betting bookies to dinner with Elaine (men whom Elaine wished to avoid), and by causing Jerry's girlfriend Gwen to believe that Jerry was cheating on her.[15]

Some people, most of them inspired by the Seinfeld episode,[1] subsequently began to celebrate the holiday with varying degrees of seriousness. Allen Salkin's 2005 book Festivus: The Holiday for the Rest of Us[5] chronicles the early adoption of Festivus. Rabbi Joshua Eli Plaut's book A Kosher Christmas: 'Tis the Season to Be Jewish (Rutgers University Press, 2012) references Festivus, along with hybrid holidays such as Chrismukkah.

During the Baltimore Ravens' run to the Super Bowl XXXV Championship in 2000, head coach Brian Billick superstitiously issued an organizational ban on the use of the word "playoffs" until the team had clinched its first postseason berth.[16] "Playoffs" was instead referred to as Festivus and the Super Bowl as Festivus Maximus.[17]

In 2005, Wisconsin Governor Jim Doyle was declared "Governor Festivus" and during the holiday season displayed a Festivus Pole in the family room of the Executive Residence in Madison, Wisconsin.[18] Governor Doyle's 2005 Festivus Pole is now part of the collection of the Wisconsin Historical Museum.[19]

In 2010, a CNN story featuring Jerry Stiller detailed the increasing popularity of the holiday, including US Representative Eric Cantor's Festivus fundraiser,[20] and the Christian Science Monitor reported that Festivus was a top trend on Twitter that year.[21]

In 2012, Google introduced a custom search result for the term "Festivus". In addition to the normal results an unadorned aluminum pole was displayed running down the side of the list of search results and "A festivus miracle!" prefixes the results count and speed.[22][23]

In 2012, a Festivus Pole was erected on city property in Deerfield Beach, Florida, alongside religious themed holiday displays.[24] A similar Festivus Pole was displayed next to religious displays in the Wisconsin State Capitol, along with a banner provided by the Freedom From Religion Foundation advocating for the separation of government and religion.[25]

In 2013 and 2014 a Festivus Pole constructed with 6 feet (1.8 m) of beer cans was erected next to a nativity scene and other religious holiday displays in the Florida State Capitol Building, as a protest supporting separation of church and state.[25] For the third year in a row in 2015, the same man was granted permission to display a Festivus pole, this year decorated with a gay pride theme and topped with a disco ball to celebrate the court's decision on same-sex marriage, at state capitols in Florida,[26] Georgia, Illinois, Michigan, Missouri, Oklahoma, and Washington.[27]

The O'Keefe family holiday featured other practices, as detailed in The Real Festivus (2005), a book by Daniel O'Keefe's son, Dan O'Keefe.[13][28] Besides providing a first-person account of the early version of the Festivus holiday as celebrated by the O'Keefe family, the book relates how Dan O'Keefe amended or replaced details of his father's invention to create the Seinfeld episode.[29]

In a 2013 CNN segment on the origins of Festivus, O'Keefe spoke about the real-life experiences related to the holiday. O'Keefe's father, who originated some of the now-recognized Festivus traditions, used a clock, not an aluminum pole. O'Keefe told CNN:

"The real symbol of the holiday was a clock that my dad put in a bag and nailed to the wall every year...I don't know why, I don't know what it means, he would never tell me. He would always say, 'That's not for you to know.'"[11]