From Infogalactic: the planetary knowledge core
Jump to: navigation, search
For other uses, see FETA (disambiguation). 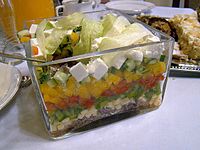 Feta (Greek: φέτα, féta, "slice") is a brined curd white cheese made in Greece from sheep's milk, or from a mixture of sheep and goat's milk. Similar brined white cheeses produced outside the European Union are often made partly or wholly of cow's milk, and they are also sometimes called feta. It is a crumbly aged cheese, commonly produced in blocks, and has a slightly grainy texture. Feta is used as a table cheese, as well as in salads (e.g. the Greek salad) and pastries. Most notable is its use in the popular phyllo-based dishes spanakopita ("spinach pie") and tyropita ("cheese pie"), or served with some olive oil or olives and sprinkled with aromatic herbs such as oregano. It can also be served cooked or grilled, as part of a sandwich, in omelettes, or as a salty alternative to other cheeses in a variety of dishes.

Since 2002, "feta" has been a protected designation of origin product in the European Union. According to the relevant EU legislation, only those cheeses produced in a traditional way in particular areas of Greece, which are made from sheep's milk, or from a mixture of sheep's and up to 30% of goat's milk from the same area, can be called "feta".[1] However, similar white-brined cheeses (often called "white cheese" in various languages) are found in the Eastern Mediterranean and around the Black Sea.

Feta is a Greek soft brined white cheese with small or no holes, a compact touch, few cuts, and no skin. It is usually formed into large blocks, which are submerged in brine. Its flavor is tangy and salty, ranging from mild to sharp. Its maximum moisture is 56%, its minimum fat content in dry matter is 43%, and its pH usually ranges from 4.4 to 4.6.[2] Feta is traditionally categorized into "firm" and "soft" varieties. The firm variety is tangier and considered higher quality. The soft variety is almost soft enough to be spreadable, mostly used in pies and sold at a cheaper price. When sliced, feta always produces a varying amount of trímma, "crumble", which is also used in pies; trímma is not sellable and is usually given away for free upon request.

High-quality feta should have a creamy texture when sampled, and aromas of ewe's milk, butter, and yoghurt. In the mouth it is tangy, slightly salty, and mildly sour, with a spicy finish that recalls pepper and ginger, as well as a hint of sweetness.

Traditionally (and legally within the EU), feta is produced using only whole sheep's milk, or a blend of sheep's and goat's milk (with a maximum of 30% goat's milk).[3] The milk may be pasteurized or not, but most producers now use pasteurized milk. When the pasteurized milk has cooled to approximately 35 °C (95 °F),[4][5] rennet is added and the casein is left to coagulate. The compacted curds are then cut up and placed in a special mould or a cloth bag to allow the whey to drain.[6][7] After several hours, the curd is firm enough to cut up and salt;[4] salinity will eventually reach approximately 3%,[5] the salted curds are then placed (depending on the producer and the area of Greece) in metal vessels or wooden barrels, and allowed to infuse for several days.[4][5][7] After the dry-salting of the cheese is complete, aging or maturation in brine (a 7% salt in water solution) takes several weeks at room temperature and then for at least 2 months in a refrigerated high-humidity environment, and as before, this takes place either in wooden barrels or metal vessels,[5][7] depending on the producer; however, barrel aging is said to give the cheese a unique flavor and is more traditional. The containers are then shipped to supermarkets where the cheese is cut and sold directly from the container; alternatively blocks of standardized weight are packaged in sealed plastic cups with some brine. Feta dries relatively quickly even when refrigerated; if stored for longer than a week, it should be kept in brine or in lightly salted milk.

"They make a great many cheeses; it is a pity they are so salty. I saw great warehouses full of them, some in which the brine, or salmoria as we would say was two feet deep, and the large cheeses were floating in it. Those in charge told me that the cheeses could not be preserved in any other way, being so rich. They do not know how to make butter. They sell a great quantity to the ships that call there: it was astonishing to see the number of cheeses taken on board our own galley."

The earliest references to cheese production in Greece date back to the 8th century BC and the technology used to make cheese from sheep's or goat's milk, as described in Homer's Odyssey involving the contents of Polyphemus's cave,[9] is similar to the technology used by Greek shepherds today to produce feta.[10][11] Cheese made from sheep's/goat's milk was a common food in ancient Greece and an integral component of later Greek gastronomy.[10] Feta cheese, specifically, is first recorded in the Byzantine Empire (Poem on Medicine 1.209) under the name prósphatos (Greek: πρόσφατος, "recent" or "fresh"), and was produced by the Cretans and the Vlachs of Thessaly.[8] In the late 15th century, an Italian visitor to Candia, Pietro Casola, describes the marketing of feta, as well as its storage in brine.[8]

The Greek word feta (φέτα) comes from the Italian word fetta ("slice"), which in turn is derived from the Latin word offa ("a morsel", "piece").[12][13] It was introduced into the Greek language in the 17th century, became a widespread term in the 19th century, and probably refers to the practice of slicing cheese in order to place the slices into barrels.[11]

After a long legal battle with Denmark, which produced a cheese under the same name using chemically blanched cow's milk, the term "feta" has been a protected designation of origin (PDO) since October 2002, which limits the name "feta" within the European Union to brined cheese made exclusively of sheep's/goat's milk in Greece.[14][15]

In 2013, an agreement was reached with Canada in which feta made in Canada would be called "feta style" cheese, and would not depict on the label anything evoking Greece.[16]

According to the Commission, the biodiversity of the land coupled with the special breeds of sheep and goats used for milk is what gives feta cheese a specific aroma and flavor. When needed to describe an imitation feta, names such as "salad cheese" and "Greek-style cheese" are used. The European Commission gave other nations five years to find a new name for their "feta" cheese, or stop production.[1] Because of the decision by the European Union, Danish dairy company Arla Foods changed the name of its white cheese products to Apetina, which is also the name of an Arla food brand established in 1991.[17] 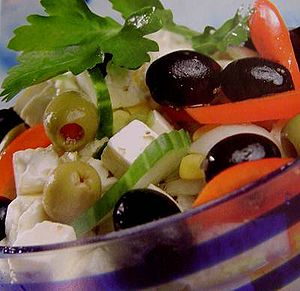 Similar cheeses can be found in: