From Infogalactic: the planetary knowledge core
Jump to: navigation, search
For other uses, see Fetish (disambiguation). 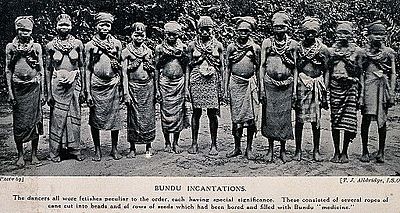 Teenage girls being initiated into the Sande society, Sierra Leone, West Africa.[1] Text: "The dancers all wore fetishes peculiar to the order, each having special significance. These consisted of several ropes of cane cut into beads and of rows of seeds which had been bored and filled with Bundu (Sande) medicine".

A fetish (derived from the French fétiche; which comes from the Portuguese feitiço; and this in turn from Latin facticius, "artificial" and facere, "to make") is an object believed to have supernatural powers, or in particular, a man-made object that has power over others. Essentially, fetishism is the emic attribution of inherent value or powers to an object.

The term "fetish" has evolved from an idiom used to describe a type of objects created in the interaction between European travelers and Africans in the early modern period to an analytical term that played a central role in the perception and study of non-Western art in general and African art in particular.

William Pietz, who conducted an extensive ethno-historical study of the fetish, argues that the term originated in the coast of West Africa during the sixteenth and seventeenth centuries. Pietz distinguishes between, on the one hand, actual African objects that may be called fetishes in Europe, together with the indigenous theories of them, and on the other hand, "fetish," an idea, and an idea of a kind of object, to which the term above applies.[2]

According to Pietz, the post-colonial concept of "fetish" emerged from the encounter between Europeans, a feudalistic society with a Catholic theological tradition, and Africans in a very specific historical context and in response to African material culture.

He begins his polemic with an introduction to the complex history of the word:

My argument, then, is that the fetish could originate only in conjunction with the emergent articulation of the ideology of the commodity form that defined itself within and against the social values and religious ideologies of two radically different types of noncapitalist society, as they encountered each other in an ongoing cross-cultural situation. This process is indicated in the history of the word itself as it developed from the late medieval Portuguese feitiço, to the sixteenth-century pidgin Fetisso on the African coast, to various northern European versions of the word via the 1602 text of the Dutchman Pieter de Marees... The fetish, then, not only originated from, but remains specific to, the problematic of the social value of material objects as revealed in situations formed by the encounter of radically heterogenous social systems, and a study of the history of the idea of the fetish may be guided by identifying those themes that persist throughout the various discourses and disciplines that have appropriated the term.[3]

Stallybrass concludes that "Pietz shows that the fetish as a concept was elaborated to demonize the supposedly arbitrary attachment of West Africans to material objects. The European subject was constituted in opposition to a demonized fetishism, through the disavowal of the object."[4]

The concept was popularized in Europe circa 1757, when Charles de Brosses used it in comparing West African religion to the magical aspects of ancient Egyptian religion. Later, Auguste Comte employed the concept in his theory of the evolution of religion, wherein he posited fetishism as the earliest (most primitive) stage, followed by polytheism and monotheism. However, ethnography and anthropology would classify some artifacts of monotheistic religions as fetishes. For example, the Holy Cross and the consecrated host or tokens of communion found in some forms of Christianity (a monotheistic religion), are here regarded as examples of fetishism.

The theory of fetishism was consecrated at the end of the eighteenth-century by G.W.F Hegel in Lectures on the Philosophy of History. According to Hegel, Africans were incapable of abstract thought, their ideas and actions were governed by impulse, and therefore a fetish object could be anything that then was arbitrarily imbued with imaginary powers.[6]

In the 19th and 20th centuries, Tylor and McLennan, historians of religion, held that the concept of fetishism fostered a shift of attention away from the relationship between people and God, to focus instead on a relationship between people and material objects, and that this, in turn, allowed for the establishment of false models of causality for natural events. This they saw as a central problem historically and sociologically.

In 1927, Sigmund Freud published his essay on "Fetishism," in which he writes that the meaning and purpose of the fetish turns out, through analysis, to always be the same: "the fetish is a substitute for the penis...for a particular and quite special penis that had been extremely important in early childhood but had later been lost." In refusing to see his mother's lack of penis, the boy disavows (German: Verleugnung, not repression: Verdrängung) what he sees, resulting in both a belief and a non-belief in the woman's phallus. This compromise (produced by the conflict between perception and the counter-wish) results in a substitute (the fetish). "It remains a token of triumph over the threat of castration and a protection against it." 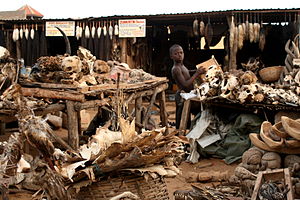 The use of the concept in the study of religion derives from studies of traditional West African religious beliefs, as well as from Voodoo, which in turn derives from those beliefs.

Fetishes were commonly used in Native American religion and practices.[7] The bear represented the shaman, the buffalo was the provider, the mountain lion was the warrior, and the wolf was the pathfinder.[7]

Made and used by the BaKongo people of western Zaire, a nkisi (plural minkisi) is a sculptural object that provides a local habitation for a spiritual personality. Though some minkisi have always been anthropomorphic, they were probably much less naturalistic or "realistic" before the arrival of the Europeans in the nineteenth century; Kongo figures are more naturalistic in the coastal areas than inland.[2] As Europeans tend to think of spirits as objects of worship, idols become the objects of idolatry when worship was addressed to false gods. In this way, Europeans regarded minkisi as idols on the basis of false assumptions.

Europeans often called nkisi "fetishes" and sometimes "idols" because they are sometimes rendered in human form. Modern anthropology has generally referred to these objects either as "power objects" or as "charms".

In addressing the question of whether a nkisi is a fetish, William McGaffey writes that the Kongo ritual system as a whole

"bears a relationship similar to that which Marx supposed that 'political economy' bore to capitalism as its 'religion', but not for the reasons advanced by Bosman, the Enlightenment thinkers, and Hegel. The irrationally 'animate' character of the ritual system's symbolic apparatus, including minkisi, divination devices, and witch-testing ordeals, obliquely expressed real relations of power among the participants in ritual. 'Fetishism' is about relations among people, rather than the objects that mediate and disguise those relations."[2]

Therefore, McGaffey concludes, to call a minkisi a fetish is to translate "certain Kongo realities into the categories developed in the emergent social sciences of nineteenth century, post-enlightenment Europe."[2]

The 19th century saw the introduction of two theories of fetishism outside what was typically considered religion. The first was Karl Marx's idea of commodity fetishism, in which objects are imagined to dictate the social activities that produce them. The second was Alfred Binet's term sexual fetishism, the sexual attachment to an object in place of a person. Scholars have continued to develop these theories ever since, and they have influenced anthropologists' understanding of fetishism in general.