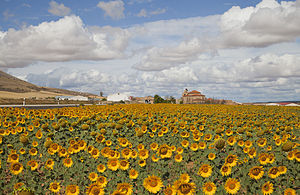 A field of sunflowers in Cardejón, Spain

In agriculture, a field is an area of land, enclosed or otherwise, used for agricultural purposes such as cultivating crops or as a paddock or other enclosure for livestock. A field may also be an area left to lie fallow or as arable land.

Many farms have a field border, usually composed of a strip of shrubs and vegetation, used to provide food and cover necessary for the survival of wildlife. It has been found that these borders may lead to an increased variety of animals and plants in the area, but also in some cases a decreased yield of crops.[1]

In Australian and New Zealand English, any agricultural field may be called a paddock. If stock are grazed there, the space may be called a run, e.g. sheep run; cattle run.[2]