The mission of the Field Artillery is to destroy, defeat, or disrupt the enemy with integrated fires to enable maneuver commanders to dominate in unified land operations.[1]

The Field Artillery is one of the Army's combat arms, traditionally one of the three major branches (with Infantry and Armor). It refers to those units that use artillery weapons systems to deliver surface-to-surface long range indirect fire. Indirect fire means that the projectile does not follow the line of sight to the target. Mortars are not field artillery weapons; they are organic to infantry units and are manned by infantry personnel.

The officially stated mission of the Field Artillery is to destroy, defeat, or disrupt the enemy with integrated fires to enable maneuver commanders to dominate in unified land operations. 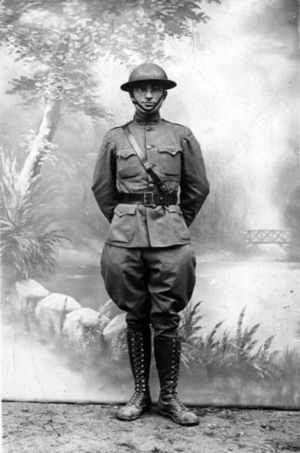 Field artillery is called the "King of Battle". Conflicts in the 20th century saw artillery become exponentially more effective as indirect fire methods were introduced immediately prior to World War I. During World War I and World War II, field artillery was the single highest casualty-producing weapons system on any battlefield.

Members of the Field Artillery are referred to as "redlegs" because during the American Civil War they were distinguished by scarlet stripes down the legs of their uniform pants. The use of colors to distinguish branches of the United States Army dates to 1851. Branch colors are found on the shoulder straps of officers wearing the blue dress uniform and on branch of service scarves authorized for wear with a variety of uniforms.[2]

The U.S. Army employs several types of field artillery weapons systems. The four towed howitzer weapon systems in use are the M102 (105 mm), used primarily by honor guards, the M119A1/A2 (105 mm), the M198 (155 mm) howitzers, and the M777 155 mm howitzer. The M109A6 Paladin is a 155 mm self-propelled howitzer. The M270A1 Multiple Launch Rocket System (MLRS) is the Field Artillery's heaviest and longest-ranged weapons system, a self-propelled rocket launcher using either 270 mm unguided rockets or the Army Tactical Missile System (ATACMS) Block I missile. The United States Marine Corps is currently transitioning from the M198 howitzer to the M777.

In 1789 after the Revolution there was only one battalion of four companies of artillery. In 1794 a "Corps of Artillerists and Engineers" was organized, which included the four companies of artillery then in service and had sixteen companies in four battalions. In 1802 there was a reduction of the army. The Engineers were separated from the Artillery and the latter formed into one regiment of 20 companies. In 1808 a regiment of ten companies called the "Light Artillery" was formed. In 1812 two more regiments were added.

In 1821 four regiments were created from existing units on the following lines.

In 1901 the regimental organization of the US Army artillery was abolished, more companies were added, and given numerical designations.

In 1907 the Coast Artillery Corps was established as a separate branch, and the Field Artillery re-established regiments officially, although provisional regiments had existed since 1905.[4]

In 1916 Congress enacted the National Defense Act and 15 more regiments were authorized.

In 1933 another expansion created numerous serially numbered battalions and many regiments were taken apart and reduced to battalion size, and during World War II a new designation was applied to some units, the "Armored Field Artillery Battalion"

Army Anti-Aircraft Command ARAACOM was created July 1950, and in 1957, ARAACOM was renamed to US Army Air Defense Command (USARADCOM). A new system, the U.S. Army Combat Arms Regimental System, or CARS, was adopted in 1957 to replace the old regimental system. CARS uses the Army's traditional regiments as parent organizations for historical purposes, but the primary building blocks are divisions, and brigades became battalions. Each battalion carries an association with a parent regiment, even though the regimental organization no longer exists. In some brigades several numbered battalions carrying the same regimental association may still serve together, and tend to consider themselves part of the traditional regiment when in fact they are independent battalions serving a brigade, rather than a regimental, headquarters.

In 1968 the Air Defense Artillery Branch (United States Army) was split from the artillery.

The CARS was replaced by the U.S. Army Regimental System (USARS) in 1981. On 1 October 2005, the word "regiment" was formally appended to the name of all active and inactive CARS and USARS regiments. So, for example, the 1st Cavalry officially became titled the 1st Cavalry Regiment.