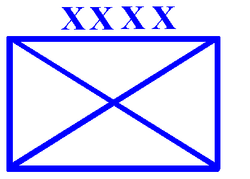 The standard map symbol for a field army. The four exes are the generic symbol of a field army (i.e. they do not represent Roman numerals); the army's specific number or name, if included, would be written numerically to the left of the symbol.

The unit flag of the Sixth United States Army. The distinguishing flag of a United States army is bicolored, white over red, measuring 91.4 centimeters (36 inches) hoist by 121.9 centimeters (48 inches) fly, with gold fringe. In the center is a rendering of the army's shoulder-sleeve insignia, measuring 38.1 centimeters (15 inches) in height.[1]

A field army (or numbered army or simply army) is a military formation in many armed forces, composed of two or more corps and may be subordinate to an army group. Likewise, air armies are equivalent formation within some air forces. A field army is composed of 100,000 to 150,000 troops.

Particular field armies are usually named or numbered to distinguish them from "army" in the sense of an entire national land military force. In English, the typical style for naming field armies is word numbers, such as "First Army"; whereas corps are usually distinguished by Roman numerals (e.g. I Corps) and subordinate formations with ordinal numbers (e.g. 1st Division). A field army may be given a geographical name in addition to or as an alternative to a numerical name, such as the British Army of the Rhine, Army of the Niemen or Aegean Army (also known as the Fourth Army).

The Roman army was among the first to feature a formal field army, in the sense of a very large, combined arms formation, namely the sacer comitatus, which may be translated literally as "sacred escort". The term is derived from the fact that they were commanded by Roman emperors (who were regarded as sacred), when they acted as field commanders. While the Roman comitatensis (plural: comitatenses) is sometimes translated as "field army", it may also be translated as the more generic "field force" or "mobile force" (as opposed to limitanei or garrison units).

In some armed forces, an "army" is or has been equivalent to a corps-level unit. Prior to 1945, this was the case with a gun (軍; "army") within the Imperial Japanese Army, for which the formation equivalent in size to a field army was an "area army" (方面軍; hōmen-gun). In the Soviet Red Army and the Soviet Air Forces, an army was subordinate in wartime to a front (an equivalent of army group). It contained at least three to five divisions along with artillery, air defense, reconnaissance and other supporting units. It could be classified as either a combined arms army (CAA) or tank army (TA); and while both were combined arms formations, the former contained a larger number of motorized rifle divisions while the later contained a larger number of tank divisions.[2] In peacetime, a Soviet army was usually subordinate to a military district.

Modern field armies are large formations which vary significantly between armed forces in size, composition, and scope of responsibility. For instance, within NATO a field army is composed of a headquarters, and usually controls at least two corps, beneath which are a variable number of divisions. A battle is influenced at the field army level by transferring divisions and reinforcements from one corps to another to increase the pressure on the enemy at a critical point. NATO armies are controlled by a general or lieutenant general.