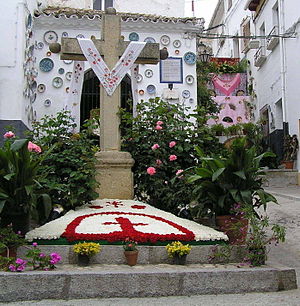 The Fiesta de las Cruces ("Festival of the Crosses") or Cruz de Mayo ("May Cross") is a holiday celebrated 3 May in many parts of Spain and Hispanic America.

Religiously, the festival is rooted in the search by the Byzantine Empress Saint Helena for the cross on which Jesus died, but the popular traditions connected to the festival certainly originate from pagan traditions brought to Spain by the Roman Empire (see May Day).

The legend is that Emperor Constantine I, in the sixth year of his reign, confronted the barbarians on the banks of the Danube, in a battle where victory was believed to be impossible because of the great size of the enemy army. One night, Constantine had a vision of a cross in the sky, and by it the words "In hoc signo vincis" (With this sign, you shall be victorious). The emperor had a cross made and put it at the front of his army, which won an easy victory over the enemy multitude. On returning to the city and learning the significance of the cross, Constantine was baptized as a Christian and gave orders to construct Christian churches. He sent his mother, Saint Helena, to Jerusalem in search of the True Cross, the cross on which Jesus died. Once there, Helena summoned the wisest priests to aid in her attempt to find the cross. On Calvary Hill, traditionally considered the site of Jesus's crucifixion, she found three bloody logs hidden. In order to discover which was the True Cross, she placed the logs one by one over sick people, and even dead people, who were cured or resuscitated at the touch of the True Cross. The veneration of the True Cross, and the use of pieces of the True Cross as relics, begins at this time. Santa Helena died praying for all believers in Christ to celebrate the commemoration of the day the Cross was found.

Places where the holiday is celebrated

The "Fiesta de las Cruces" is celebrated in numerous places in Spain and Hispanoamerica. 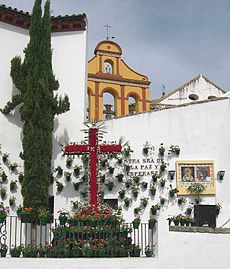 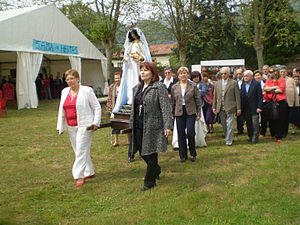 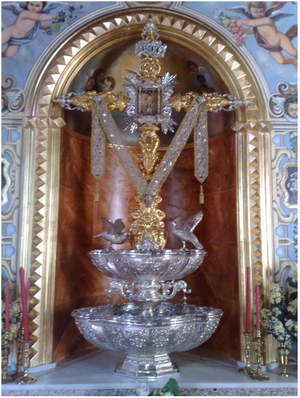 The Departments of Antioquia, Caldas, Quindío, and Risaralda, and the municipality of Funza, diocese of Facatativá, have a large population of Basque descent, who carry on the tradition of the Día de la Santa Cruz ("Day of the Holy Cross") or Día de los Mil Jesuses ("Day of the Thousand Jesuses") on 3 May. People speak the name of Jesus one thousand times, and believe this will protect them through the coming year.[citation needed]

In Ecuador, the holiday is mostly celebrated in the Sierra region, and takes on a more raucous aspect. There are fireworks and people drink canelazo. There are feasts and masquerades.

Most of Guatemala celebrates the Fiesta de las Cruces largely in a symbolic and respectful manner, with colorful processions.

The construction equipment and materials retailer FFACSA, one of Guatemala's leading businesses, sponsors a large and less traditional celebration in Chimaltenango Department. That celebration begins at 6 p.m. on 2 May with a celebration of the eucharist in honor of the Holy Cross. On 3 May people begin to gather at 3 a.m. and parade through the streets of various municipalities of the department, after which there are various sporting activities (including mountain biking and a marathon). At noon, roughly 3,000 construction workers gather for lunch at FFACSA's various branch offices (in Quetzaltenango, Sacatepéquez, Totonicapán) and at their central site in Chimaltenango. After lunch there are raffles, with prizes such as motorcycles, bicycles, televisions, DVD players, and household appliances. At 4 p.m. there is an open-air concert at the park in the center of Chimaltenango, again with raffles and prizes, and from 7 p.m. there are fireworks competitions.

In Mexico, the celebration of the Holy Cross began at the dawn of the 16th century, when captain Juan de Grijalva gave the name Isla de la Santa Cruz to the island now known as Cozumel, Quintana Roo. The holiday is celebrated in Mexico mainly by guilds and unions involved in construction. A cross adorned with flowers and paper is placed in a high position on a building in the process of construction. The workers then celebrate with local cuisine and alcoholic beverages such as tequila, mezcal, and local beer. 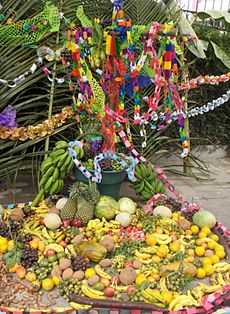 In El Salvador, the Day of the Cross ("Día de la Cruz" in Spanish), as it is known, is celebrated on May 3. This celebration is not considered an official government or church holiday; it only marks the beginning of the "wet" or rainy season in winter. It is a tradition that dates back to prehispanic times during which the indigenous people of the region (Pipiles) offered food to give thanks to the gods and Mother Earth for what they provided. The cross was added when the tradition fused with Catholicism during the colonial period. The cross is made from wood, and decorated with flowers and long chains of colorful tissue paper. Fruits, grains, vegetables, drinks, candies and sometimes money are placed at the foot of the cross as offerings. Visitors to the household are invited to take offerings with them after they kneel in front of the cross and recite a thanksgiving prayer.

In Lopinot, Trinidad, parang is performed at the Cruz de Mayo (May Cross) festival, a ritual whose performance strongly mirrors the contemporary Santa Rosa Festival and was likely the source of its patterning. The Cruz de Mayo celebrates the month of Mary, and is also when the maypole is performed, which has even more significance for the Caribs as it was amalgamated into their traditions of weaving the sebucán, their cassava strainer (the dance around the maypole, weaving the ribbons together, is seen as mimicking the weaving of the sebucán).[3]