The Fifth Crusade (1213–1221) was an attempt by Catholic Europeans to reacquire Jerusalem and the rest of the Holy Land by first conquering the powerful Ayyubid state in Egypt.

Pope Innocent III and his successor Pope Honorius III organized crusading armies led by King Andrew II of Hungary and Duke Leopold VI of Austria, and a foray against Jerusalem ultimately left the city in Muslim hands. Later in 1218, a German army led by Oliver of Cologne, and a mixed army of Dutch, Flemish and Frisian soldiers led by William I, Count of Holland joined the crusade. In order to attack Damietta in Egypt, they allied in Anatolia with the Seljuk Sultanate of Rûm which attacked the Ayyubids in Syria in an attempt to free the Crusaders from fighting on two fronts.

After occupying the port of Damietta, the Crusaders marched south towards Cairo in July 1221, but were turned back after their dwindling supplies led to a forced retreat. A nighttime attack by Sultan Al-Kamil resulted in a great number of crusader losses, and eventually in the surrender of the army. Al-Kamil agreed to an eight-year peace agreement with Europe.

Innocent III had already planned since 1208 a crusade to destroy the Ayyubid Empire and to recapture Jerusalem. In April 1213 he issued the papal bull Quia maior, calling all of Christendom to join a new crusade. This was followed by another papal bull, the Ad Liberandam in 1215.[1]

The message of the crusade was preached in France by Robert of Courçon; unlike other Crusades, few French knights joined, as they were already fighting the Albigensian Crusade against the heretical Cathar sect in southern France.

In 1215 Pope Innocent III summoned the Fourth Lateran Council, where, along with the Latin Patriarch of Jerusalem, Raoul of Merencourt, he discussed the recovery of the Holy Land, among other church business. Pope Innocent wanted it to be led by the papacy, as the First Crusade should have been, to avoid the mistakes of the Fourth Crusade, which had been taken over by the Venetians. Pope Innocent planned for the crusaders to meet at Brindisi in 1216, and prohibited trade with the Muslims, to ensure that the crusaders would have ships and weapons. Every crusader would receive an indulgence, including those who simply helped pay the expenses of a crusader, but did not go on crusade themselves.

Oliver of Cologne had preached the crusade in Germany, and Emperor Frederick II attempted to join in 1215. Frederick was the last monarch Innocent wanted to join, as he had challenged the Papacy (and would do so in the years to come). Innocent died in 1216 and was succeeded by Pope Honorius III, who barred Frederick from participating, but organized crusading armies led by King Andrew II of Hungary and Duke Leopold VI of Austria. Andrew had the largest royal army in the history of the crusades (20,000 knights and 12,000 castle-garrisons).[citation needed]

The first to take up the cross in the Fifth Crusade was King Andrew II of Hungary.[2] Andrew and his troops embarked on 23 August 1217, in Split. They were transported by the Venetian fleet, which was the largest European fleet in the era. They landed on 9 October on Cyprus from where they sailed to Acre and joined John of Brienne, ruler of the Kingdom of Jerusalem, Hugh I of Cyprus, and Prince Bohemund IV of Antioch to fight against the Ayyubids in Syria. Until his return to Hungary, king Andrew remained the leader of Christian forces in the Fifth Crusade.[3] In October 1217, the leaders of the crusaders - Masters of Hospitalers, Templars and Teutons with the leaders and dignitaries of the crusade - held a war council in Acre, over which King Andrew II presided.[4]

In Jerusalem, the walls and fortifications were demolished to prevent the Christians from being able to defend the city, if they did manage to reach it and take it. Muslims fled the city, afraid that there would be a repeat of the bloodbath of the First Crusade in 1099.

King Andrew's well-mounted army defeated sultan Al-Adil I at Bethsaida on the Jordan River on 10 November 1217. Muslim forces retreated in their fortresses and towns. The crusaders' catapults and trebuchets did not arrive in time, so they had fruitless assaults on the fortresses of the Lebanon and on Mount Tabor. Afterwards, Andrew spent his time collecting alleged relics. At the beginning of 1218 Andrew, who was very sick, decided to return to Hungary.[5][6]

Andrew and his army departed to Hungary in February 1218, and Bohemund and Hugh also returned home.[6]

Alliance with the Sultanate of Rum

Later in 1218 Oliver of Cologne arrived with a new German army and the count of Holland William I arrived with a mixed army consisting of Dutch, Flemish and Frisian soldiers. With Leopold and John they discussed attacking Damietta in Egypt. To accomplish this, they allied with Keykavus I, the leader in Anatolia, who attacked the Ayyubids in Syria in an attempt to free the Crusaders from fighting on two fronts. 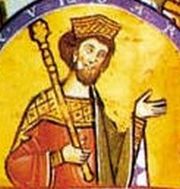 In July 1218 the crusaders began their siege of Damietta, and despite resistance from the unprepared sultan Al-Adil, the tower outside the city was taken on August 25. They could not gain Damietta itself, and in the ensuing months diseases killed many of the crusaders, including Robert of Courcon. Al-Adil also died and was succeeded by Al-Kamil. Meanwhile, Honorius III sent Pelagius of Albano to lead the crusade in 1219 . Al-Kamil tried to negotiate peace with the crusaders. He offered to trade Damietta for Jerusalem, but Pelagius would not accept these offers. After hearing this Count William I of Holland left the crusade and sailed home. In August or September, Francis of Assisi arrived in the crusader camp and crossed over to preach to Al-Kamil. By November, the crusaders had worn out the sultan's forces, and were finally able to occupy the port.

Immediately the papal and secular powers fought for control of the town, with John of Brienne claiming it for himself in 1220. Pelagius would not accept this, and John returned to Acre later that year. Pelagius hoped Frederick II would arrive with a fresh army, but he never did; instead, after a year of inactivity in both Syria and Egypt, John of Brienne returned, and the crusaders marched south towards Cairo in July 1221 . This march was observed by the forces of Al-Kamil, and frequent raids along the flanks of the army led to the withdrawal of some 2000 German troops who refused to continue the advance and returned to Damietta.

By now Al-Kamil was able to ally with the other Ayyubids in Syria, who had defeated Keykavus I. The crusader march to Cairo was disastrous; the river Nile flooded ahead of them, stopping the crusader advance. A dry canal that was previously crossed by the crusaders flooded, thus blocking the crusader army's retreat. With supplies dwindling, a forced retreat began, culminating in a night time attack by Al-Kamil which resulted in a great number of crusader losses and eventually in the surrender of the army under Pelagius.

The terms of this surrender meant the relinquishing of Damietta to Al-Kamil in exchange for the release of the crusaders. Al-Kamil agreed to an eight-year peace agreement with Europe and to return a piece of the true cross. However, the relic was never returned as Al-Kamil did not, in fact, have it.

The failure of the Crusade caused an outpouring of anti-papal sentiment from the Occitan poet Guilhem Figueira. The more orthodox Gormonda de Monpeslier responded to Figueira's D'un sirventes far with a song of her own, Greu m'es a durar. Instead of blaming Pelagius or the Papacy, she laid the blame on the "foolishness" of the wicked.