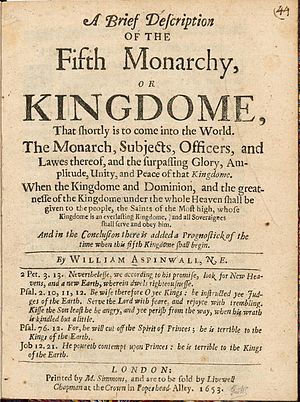 Title page of A Brief description of the Fifth Monarchy or Kingdome (1653) by William Aspinwall.

The Fifth Monarchists or Fifth Monarchy Men were active from 1649 to 1660 during the Interregnum, following the English Civil Wars of the 17th century.[1] They took their name from a prophecy in the Book of Daniel that four ancient monarchies (Babylonian, Persian, Macedonian, and Roman) would precede the kingdom of Christ. They also referred to the year 1666 and its relationship to the biblical Number of the Beast indicating the end of earthly rule by carnal human beings. They were one of a number of nonconformist dissenting groups that emerged around this time.

The Fifth Monarchists were one of many groups of Christian believers during and after the English Civil War whose theological beliefs challenged the more mainstream ideas of the day. Specifically, they believed in a geopolitical theory which maintained that four world rulers had already come and gone according to the prophecies of Daniel 2 in the Old Testament. This text recounts a prophetic dream by Nebuchadnezzar. The previous empires of which he dreamed were interpreted to have been Babylonian, Persian, Grecian and Roman; the last empire, the Monarchists concluded, would be established by the returning Jesus as King of Kings and Lord of Lords to reign with his saints on earth for a thousand years. The Fifth Monarchists saw themselves as those saints of that soon to be dawning millennium. Among prominent Fifth Monarchists were Thomas Harrison, Christopher Feake, Vavasor Powell, John Carew, John Rogers and Robert Blackborne, Secretary of the Admiralty and later of the British East India Company.

Fifth Monarchists believed that the timing of the events of the Interregnum were significant because the calendar year 1666 loomed large on the near horizon. The number 666 had been identified in the Book of Revelation with the ultimate human despot to rule the world, but who would be replaced by the Second Coming of the Messiah; this only added to the belief that the Fifth Monarchy was about to begin.

A number of Fifth Monarchists took a leading part in the events of the time. Thomas Harrison and John Carew were Commissioners (judges) at the trial of Charles I and signed the death warrant. Following Charles' death, Oliver Cromwell set up the Commonwealth as a more pure form of government to replace the existing monarchy. Cromwell had not intended it but, not long after establishing the Commonwealth, he dismissed the Parliament and became, in effect, a military dictator. The Fifth Monarchists were also a significant opponent to the Rump Parliament; leading Fifth Monarchists such as Vavasor Powell were annoyed at the Rump's failure to renew certain pieces of legislation, such as the Propagation of the Gospel in Wales, because they believed that the Rump was not fulfilling what the Fifth Monarchists perceived to be its aim, that is to turn England into a more 'godly' nation. Leading Fifth Monarchists also had an influence on Oliver Cromwell, as it was Thomas Harrison's idea to introduce the Nominated Assembly (Barebone's Parliament) as a body of religious men. However this was not completely the case as a large proportion of the assembly were conservative-minded gentry such as Sir Anthony Ashley Cooper. This influence on Cromwell did not last, however, as just six months after he had created the Nominated Assembly, Cromwell dissolved it in favour of Lambert's more conservative Instrument of Government.

The Republican governments of England were introduced after the English Civil War during the Interregnum (1649–60). The Commonwealth (1649–53) was founded on the execution of Charles I in 1649, and was followed by the two Protectorates of Oliver Cromwell (1653–58), and his son Richard Cromwell the first (1658–59). The Commonwealth was briefly revived (1659–60), before the restoration of the monarchy in the person of Charles II in May 1660.

After the forcible dissolution of the Rump Parliament by Oliver Cromwell, the Grandees of the Army Council of Officers were reluctant to authorise free elections because they were aware that the members returned by the traditional constituency would return Presbyterians and Royalists as well as their own sympathisers. They were not at all sure that the majority would be any more compliant than the Rump. Major-General Thomas Harrison, who had commanded the troop that aided Oliver Cromwell in dissolving the Rump, suggested that there be a ruling body based upon the Old Testament Sanhedrin of 70 selected "Saints", which was based on his beliefs, as a Fifth Monarchist, that the rule of the Saints would usher in the reign of Christ on Earth. A modified version of this proposal was accepted by Cromwell and the Council of Officers, and less than a month after the dissolution of the Rump, during May 1653, letters in the name of the Lord-General and the Army Council were sent to Congregational churches in every county in England to nominate those they considered fit to take part in the new government. The total number of nominees was one hundred and forty, one hundred and twenty-nine from England, five from Scotland and six from Ireland.

The arrest of Feake and Powell was sufficient for a time to dampen their ardour, but many of the delegates to Barebone's Parliament were from congregations with Fifth Monarchist sympathies. This assembly, which met from July until December 1653, was the high-water mark of Fifth Monarchist influence on national politics. Fearing their ultra-radical ideas, which crystallised in an attack on tithes, the conservative faction led by Major-General John Lambert, supported by the use of troops to deny access to the radical factions, engineered a vote for the dissolution of the assembly, which was passed on 12 December 1653. The collapse of the radical consensus that had spawned the Nominated Assembly led to the Grandees passing the Instrument of Government in the Council of State, which paved the way for Cromwell's Protectorate. The Fifth Monarchists were horrified at the establishment of Cromwell's Protectorate and plotted to overthrow the regime. Two plots were uncovered and broken up in 1657 and 1659. 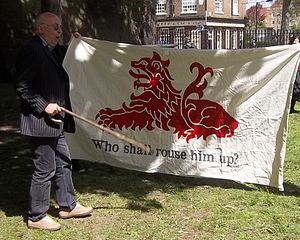 Ian Bone speaking at the installation of the Thomas Rainsborough memorial plaque (12 May 2013), championing Thomas Venner and the Fifth Monarchy Men. The banner is a replica of that used by the insurgents at the time.

After the Restoration on 14 October 1660 Major-General Thomas Harrison was the first person to be found guilty of the regicide of Charles I. He had been the seventeenth of fifty-nine commissioners (judges) to sign the death warrant of the king in 1649. He was the first regicide to be hanged, drawn and quartered because he was considered by the new government to represent a continued real threat to the re-established order. This threat was realised when, on 6 January 1661, fifty Fifth Monarchists, headed by a wine-cooper named Thomas Venner, from their alleged hideout in Norton Folgate[2] made an effort to attain possession of London in the name of "King Jesus." Most of the fifty were either killed or taken prisoner, and on 19 and 21 January Venner and ten others were hanged, drawn and quartered for high treason.

The failure of Venner's Rising led to repressive legislation to suppress non-conformist sects. Although some physical events such as the Great Plague of London and the Great Fire of London continued to encourage belief in "the end of the world" ruled by carnal human beings, the doctrine of the sect either died out or became merged in a milder form of Millenarianism.