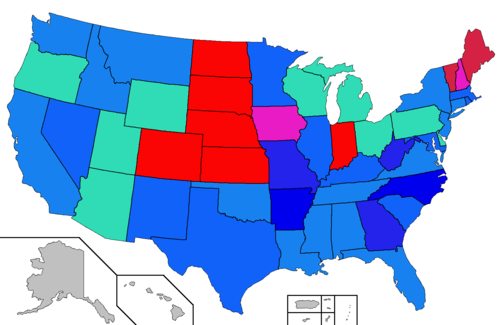 The System was dominated by Democrats through 1965, and has been mostly Republican at the presidential level since 1968. Of the 20 presidential elections since 1932, the Democrats won 7 of the first 9 (through 1964), with Democratic control of Congress as the norm, based largely on Southern disenfranchisement of African Americans since the turn of the century. After politics was influenced by the 'social issues' of the Vietnam War and civil rights movements, the Republicans have won 7 of the 12 presidential elections from 1968 to 2012. Divided government has often been the result as their respective opposition party either gained or maintained control of Congress.

With Republicans losing support because of the Great Depression, the four consecutive elections, 1932, 1936, 1940, and 1944, of Franklin D. Roosevelt gave the Democrats dominance. The conservative coalition generally controlled Congress from 1938 to 1964, again based on the powerful rural white control of the Democratic Party (and congressional representation) in the South, with its disfranchisement of blacks. The activist New Deal members promoted American liberalism, anchored in a New Deal Coalition of specific liberal groups—especially ethno-religious constituencies (Catholics, Jews, African Americans)— in addition to Southerners, well-organized labor unions, urban machines, progressive intellectuals, and populist farm groups.

The Republican Party was split. A conservative wing, led by Ohio Senator Robert A. Taft and Barry Goldwater, became dominant under Ronald Reagan after 1980. The liberal moderate wing was more successful before 1980; it was led by politicians of the Northeast and the West Coast, including Nelson Rockefeller, Earl Warren, Jacob Javits, George W. Romney, William Scranton, Henry Cabot Lodge, and Prescott Bush. Richard Nixon built his career by appealing to both wings. The moderate GOP wing generally changed form from the 1980s, becoming more conservative as white southerners joined it. In succeeding elections, conservatives and religious evangelicals pulled the party to the right. After 2010 the GOP was split between a business-oriented wing and the Tea Party movement.

Following Congressional passage of the Civil Rights Act of 1964 and Voting Rights Act of 1965, which ended legal segregation of public facilities and authorized federal enforcement to ensure minority voting, Southern Democrats gradually stopped supporting the national party.[1] Southern Democrats had been unable to block such legislation, which would enable African Americans in the South to re-enter the political system. White Southerners also split on economic, cultural and religious issues as did many white Northerners. Given the strength of fundamentalist religions in the South, and the weakness of labor unions in the region, conservatives far outnumbered liberals among whites. African Americans largely supported the Democratic Party but, because of the Great Migration, nearly six million left the South from 1910 to 1970, changing its demographics.

The Democratic coalition splintered in 1948, when Strom Thurmond ran as a Dixiecrat, and 1968, following passage of civil rights legislation. In the latter election, the Republican candidate Richard Nixon won the White House; he was reelected in 1972 with 49 states.[2][3] Nixon's disgrace in the Watergate scandal ruined him and damaged the standing of the Republican Party nationwide.[4]

Republicans regained support in the late 1980s from the formation of the Reagan coalition.[5] Democrats kept control of the House of Representatives until the 1994 election.[6] For the next twelve years, the GOP controlled the House with small majorities; the Democrats recaptured the chamber with the 2006 election and the 110th Congress. The Democrats held the Senate until 1980; after 1980, the two parties traded control of the Senate back and forth with small majorities, until the Democrats briefly held a supermajority in 2009 following the election of President Barack Obama, whose coattails and strong organizing by the Democratic Party carried other Democrats into Congress.

In the midterm elections of 2010, the Republican Party gained 63 seats in the U.S. House of Representatives, recapturing the majority. This was the largest seat change since 1948. The GOP regained control of the Senate in 2014. There are many fewer competitive seats nationwide, as when in power, each party has tried to define districts to its benefit during redistricting.

The party system model with its numbering and demarcation of the historical systems was introduced in 1967 Chambers and Burnham.[7] Much of the work published on the subject has been by political scientists explaining the events of their time as either the imminent breakup of the Fifth Party System, and the installation of a new one, or suggesting that this transition had already taken place some time ago.[8] The notion of an end to the Fifth Party system was particularly popular in the 1970s, with some specifying a culminating date as early as 1960.[9] But, no clear disciplinary consensus has been forged as to an electoral event that can be credited for shifting presidential and congressional control post the US Great Depression.[10]

Other current writing on the Fifth Party System expresses admiration of its longevity: the first four systems lasted about 30 to 40 years each. Based on this history, a Sixth Party System should have emerged by the early 21st century.[9] It is also possible, as argued in (Jensen 1981) and elsewhere, that the party system has given way, not to a new party system, but to a period of dealignment in politics. Previous party systems ended with the dominant party losing two consecutive House elections by large margins, with a presidential election coinciding with or immediately following (in 1896) the second house election. This is decisive electoral evidence of political realignment. This took place in 2006–8 in favor of the Democrats, but the Republicans won the elections of 2010 by their biggest landslide since 1946. The Democrats have outpolled the Republicans in all the presidential elections since 1992, except for 2004.[11] Barack Obama became the first African-American president in 2008, in an election held against the backdrop of severe economic problems caused by policies started or worsened under President George W. Bush and made even worse by President Obama during his first term, including funding the Iraq War off-budget.[12]

The emergence of public opinion polls gives the candidates detailed information about how well they are doing with different constituencies. Historians have relied on these polls to explain what swings among voters accounted for election results. Probably the best-known national poll has been the Gallup Poll.[13][14]

Since this period, marked demographic and economic changes have continued to affect presidential and congressional elections. The restructuring of heavy industry and move of manufacturing jobs out of the country has reduced the number and strength of union members, as well as the middle class. The increases in a service economy, including some health care jobs, have generated many more low-wage jobs. In the 21st century, income disparity in the United States has become greatly exacerbated compared to the early postwar years, with leading officers of corporations earning hundreds of times the amount of most workers in the companies. Changes to immigration laws in 1965 and forces related to economies and wars has resulted in many more immigrants to the United States from Latin America, Asia and Africa than from Europe, which has caused tensions in some areas.