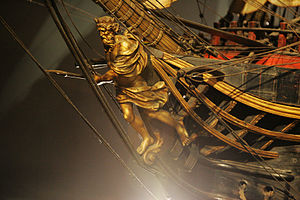 Figurehead of the Océan.

A figurehead is a carved wooden decoration found at the prow of ships largely made between the 16th and 20th centuries. 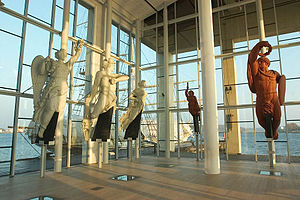 Although earlier ships had often had some form of bow ornamentation (e.g. the Viking ships of ca. A.D. 800–1100), the general practice was introduced with the galleons of the 16th century, as the figurehead as such could not come to be until ships had an actual stemhead structure on which to place it.[1] The menacing appearance of toothy and bug-eyed figureheads on Viking ships also had the protective function of warding off evil spirits.[2] The Egyptians placed figures of holy birds on the prow while the Phoenicians used horses representing speed. The Ancient Greeks used boars' heads to symbolise acute vision and ferocity while Roman boats often mounted a carving of a centurion representing valour in battle. In northern Europe, serpents, bulls, dolphins and dragons were customary and by the 13th Century, the swan was used representing grace and mobility.[3]

As with the stern ornamentation, the purpose of the figurehead was often to indicate the name of the ship in a non-literate society (albeit in a sometimes very convoluted manner); and always, in the case of naval ships, to demonstrate the wealth and might of the owner. At the height of the Baroque period, some ships boasted gigantic figureheads, weighing several tons and sometimes twinned on both sides of the bowsprit. 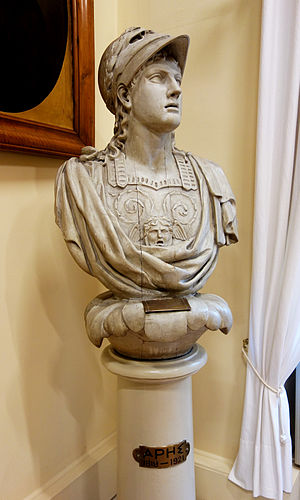 A large figurehead, being carved from massive wood and perched on the very foremost tip of the hull, adversely affected the sailing qualities of the ship. This, and cost considerations, led to figureheads being made dramatically smaller during the 18th century, and in some cases they were abolished altogether around 1800. After the Napoleonic wars they made something of a comeback, but were then often in the form of a small waist-up bust rather than the oversized full figures previously used. The clipper ships of the 1850s and 1860s customarily had full figureheads, but these were relatively small and light. 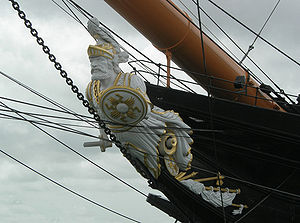 The figurehead of HMS Warrior. Other than HMS Rodney, HMS Warrior and her sister ship HMS Black Prince were the last British battleships to carry the feature.[4] 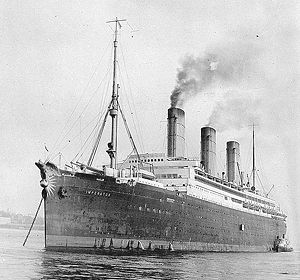 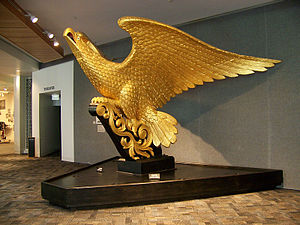 Figureheads as such died out with the military sailing ship. In addition the vogue for ram bows meant that there was no obvious place to mount one on battleships.[4] An exception was HMS Rodney which was the last British battleship to carry a figurehead.[4] Smaller ships of the royal navy continued to carry them. The last example may well have been the sloop HMS Cadmus launched in 1903.[5] Early steamships did sometimes have gilt scroll-work and coats-of-arms at their bows. This practice lasted up until about World War I. The 1910 German liner SS Imperator originally sported a large bronze figurehead of an eagle (the Imperial German symbol) standing on a globe. The few extra feet of length added by the figurehead made the Imperator the longest ship in the world at the time of her launch.

It is still common practise for warships to carry ships' badges, large plaques mounted on the superstructure with a unique design relating to the ship's name or role. For example Type 42 Destroyers of the Royal Navy, which are named after British cities, carry badges depicting the coat of arms of their namesake.

On smaller vessels, the billethead might be substituted. This was a smaller, nonfigural carving, most often a curl of foliage.[6][7]

In Germany, Belgium, and Holland, it was once believed that spirits/faeries called Kaboutermannekes (gnomes/little men (faeries)) dwelt in the figureheads.[citation needed] The spirit guarded the ship from sickness, rocks, storms, and dangerous winds. If the ship sank, the Kaboutermannekes guided the sailors' souls to the Land of the Dead. To sink without a Kaboutermanneke condemned the sailor's soul to haunt the sea forever, so Dutch sailors believed. A similar belief was found in early Scandinavia/Vikings.