Filene’s was founded in 1881 by William Filene under the name Filene’s Sons and Co. William Filene was a German Jewish immigrant from Posen, Prussia, who immigrated to Boston in 1848. By 1881 Filene had built up many small retail shops around Boston creating his own department store. 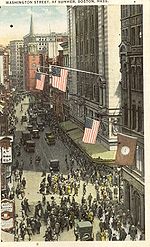 Shoppers hurry around Filene's in Boston. Jordan Marsh can be seen in the forefront with the large Filene's building at center

Although William Filene is credited with creating Filene’s, it was his sons, Edward and Lincoln, who took the store into greatness.[1] Edward and Lincoln were two of the most well known businessmen in America and were responsible for turning their father’s clothing store into one of the largest department stores in the country. The two sons assumed management of the store in 1891 and inherited the store upon their father’s death in 1901.[1] In 1908 Edward Filene opened the automatic bargain annex or Filene's Basement as a way to sell excess merchandise from the upstairs department store.[2]

He also developed an automatic mark-down schedule to mark down merchandise still used today. Edward's influence gave Filene’s an early reputation as a customer oriented store with slogans like “money back if not satisfied.”

A flagship store, Filene's Department Store, was completed in 1912 on the corner of Washington and Summer streets by Chicago architect Daniel Burnham as his last major project. By 1929 Filene’s expanded the flagship building, converting the block around Washington, Summer, Hawley and Franklin streets into one department store.[1] Also in 1929, Filene’s joined Abraham & Straus and Lazarus as the founding members of Federated Department Stores.

From the 1930s through 1990s Filene’s continued expanding beyond New England with the country growing and adapting to new shopping malls. However, Filene’s was kept at arms' length by rival Jordan Marsh, whose flagship store, like Filene's, was located in Downtown Crossing in Boston, and was also making the transition, expanding into shopping malls. In 1947, Filene’s Basement started its annual bridal gown sale. Lines extending around the store made it famous. In 1988, after the leveraged buyout of Federated by Campeau Corp. of Toronto, Canada, the division was sold to May Department Stores Co. along with Foley's of Houston. It was then that Filene's and Filene's Basement were disassociated. In 1992 Filene's absorbed G. Fox & Co. of Hartford, Connecticut, and Steiger's in 1994, two other divisions of May Company. The 1990s saw a doubling of the Filene's organization as May invested in new stores and broadened Filene's price and product assortments. In 2002 it assumed operational control of the Kaufmann's stores in Ohio, Pennsylvania, West Virginia, and western New York.

File:Filenes ad on a ticketstub.png
Filene's ad on back of Red Sox ticket

On August 30, 2005, Federated Department Stores completed its previously announced acquisition of May Department Stores, thus reuniting Federated and Filene's. On that day the Filene's/Kaufmann's organization was dissolved and the management of its stores was assumed by Macy's East and the new Macy's Midwest. The store's website was largely consolidated into macys.com during spring 2006. On September 9, 2006, the Filene's name and brand were eliminated as Federated converted Filene's to the Macy's masthead. The landmark flagship Filene's department store at Downtown Crossing closed. Federated did not convert this store to a Macy's as there was already a Macy's across the street (the former Jordan Marsh flagship store). But Boston Mayor Thomas M. Menino preferred "marrying Macy's to the Filene's building" because of its importance to Downtown Crossing and to Boston.[3] Federated never did switch Macy's leaving an empty department store in the heart of Downtown Crossing. When Filene's closed, the Boston Landmark Commission unanimously voted to protect two of the buildings that housed Filene's. The two oldest buildings were protected including the main 1912 Filene's store building and a 1905 former glassware and china seller's building on the opposite corner.[4] The two newer buildings, built in 1951 and 1973, were demolished in 2008.

File:Filene's clock DownTCrossing2008.jpg
Boston's own variation of the saying meet me under the clock with Filene's clock on Washington street

Surprisingly, the public did not protest the closing, unlike of Marshall Field's in Chicago, and Kaufmann's in Pittsburgh; the closing represented another closing of long-time institutions in Boston. By the time of the closing, Boston had already lost many local companies to larger companies in the region, especially New York, including The New York Times' acquisition of the Boston Globe and the closing of Bank of Boston and Fleet Bank. In 1996, Jordan Marsh was acquired by Macy’s, followed by Filene’s in 2006. Many Bostonians felt a sense of loss and emptiness.[3] Although the Boston Filene’s building is protected by the Landmark Commission, it only protected the façade of the buildings. This allowed the developers of the site to rip out the building's interior, including the original paneling and beauty first seen in 1912. When the project ran out of money, the buildings were left completely gutted.

Under the direction of company president Edward Filene, Filene's opened its famous "Automatic Bargain Basement" in 1909, which became a heavily visited tourist attraction. The concept of the bargain basement was not new (Marshall Field's opened the first in 1879), but Filene's basement was well lit and ostentatiously decorated. The basement had its own staff which bought surplus, factory clearances, overstock, or closeout merchandise - Filene boasted that he had once sold more than 7,000 pairs of woolen underwear in two July days. Goods were marked down according to an automatic schedule; an item that had been on sale for 12 days was marked down by 25 percent, after 18 days by 50 percent, after 24 days by 75 percent, and after 30 days it was given away. Ninety percent of goods sold in the basement were purchased within the first 12 days of sale.[6] Filene's Basement was separately owned and operated by Retail Ventures, Inc. until 2009 when it was sold to Buxbaum Group, a liquidation company. The Filene's Basement stores were not affected by the Filene's-Macy's merger, since the "Basement" had long been under totally separate ownership from Filene's. However, in 2007, the flagship Filene's Basement location was closed while the old Filene's building was being gutted and rebuilt. At the time of the closing, the store was expected to move back into its basement space in 2010; however, the Filene's Basement company entered its third Chapter 11 bankruptcy in November 2011, liquidating and permanently closing all of its stores in December 2011.