Filiki Eteria or Society of Friends (Greek: Φιλική Εταιρεία or Εταιρεία των Φιλικών) was a secret 19th-century organization whose purpose was to overthrow the Ottoman rule of Greece and establish an independent Greek state.[1] Society members were mainly young Phanariot Greeks from Russia and local chieftains from Greece. One of its leaders was Alexander Ypsilantis.[2] The Society initiated the Greek War of Independence in the spring of 1821.[3] 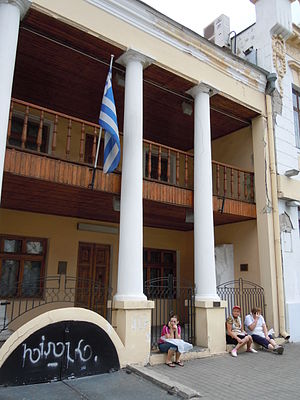 In the context of ardent desire for independence from Turkish occupation, and with the explicit influence of similar secret societies elsewhere in Europe, three Greeks came together in 1814 in Odessa to decide the constitution for a secret organization in freemasonic fashion. Its purpose was to unite all Greeks in an armed organization to overthrow Turkish rule. The three founders were Nikolaos Skoufas from the Arta province, Emmanuil Xanthos from Patmos and Athanasios Tsakalov from Ioannina.[1] Soon after they initiated a fourth member, Panagiotis Anagnostopoulos from Andritsaina. 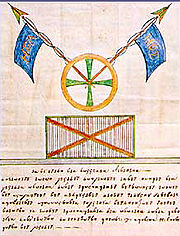 Passport of the Filiki Eteria, bearing its insignia and written in its coded alphabet.

Skoufas liaised with Konstantinos Rados who was initiated into Carbonarism. Xanthos was initiated into a Freemasonic Lodge at Lefkada ("Society of Free Builders of Saint Mavra"), while Tsakalov was a founding member of the Hellenoglosso Xenodocheio (Greek: Ελληνόγλωσσο Ξενοδοχείο, meaning Greek-speaking Hotel) an earlier but unsuccessful society for the liberation of Greece.[4]

At the start, between 1814 and 1816, there were roughly twenty members. During 1817, the society initiated members from the diaspora Greeks of Russia and the Danubian Principalities of Moldavia and Wallachia. The lord (hospodar) of Moldavia Michael Soutzos himself, became a member.[5] Massive initiations began only in 1818 and by early 1821, when the Society had expanded to almost all regions of Greece and throughout Greek communities abroad, the membership numbered in thousands.[6] Among its members were tradesmen, clergy, Russian consuls, Ottoman officials from Phanar and Serbs one of them the revolutionary Karageorge.[6][7] Members included primary instigators of the revolution, notably Theodoros Kolokotronis, Odysseas Androutsos, Dimitris Plapoutas and the metropolitan bishop Germanos of Patras.

The Oath of Initiation into the Society, painting by Dionysios Tsokos, 1849. 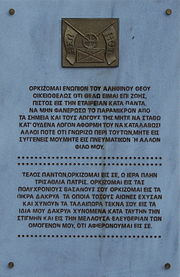 Filiki Eteria was strongly influenced by Carbonarism and Freemasonry.[4] The team of leaders was called the "Invisible Authority" (Αόρατος Αρχή) and from the start it was shrouded in mystery, secrecy and glamour. It was generally believed that a lot of important personalities were members, not only eminent Greeks, but also notable foreigners such as the Tsar of Russia Alexander I. The reality was that initially, the Invisible Authority comprised only the three founders. From 1815 until 1818, five more were added to the Invisible Authority, and after the death of Skoufas' another three more. In 1818, the Invisible Authority was renamed to the "Authority of Twelve Apostles" and each Apostle shouldered the responsibility of a separate region.

The organisational structure was pyramid-like with the "Invisible Authority" coordinating from the top. No one knew or had the right to ask who created the organisation. Commands were unquestionably carried out and members did not have the right to make decisions. Members of the society came together in what was called a "Temple" with four levels of initiation: a) Brothers (αδελφοποιητοί) or Vlamides (βλάμηδες), b) the Recommended (συστημένοι), γ) the Priests (ιερείς) and d) the Shepherds (ποιμένες).[8] The Priests were charged with the duty of initiation.[9]

When the Priest approached a new member, it was first to make sure of his patriotism and catechize him in the aims of society; the last stage was to put him under the lengthy principal oath, called the Great Oath (Μέγας Όρκος).[9] Much of the essence of it was contained in its conclusion:[8]

When the above was administered the Priest then uttered the words of acceptance of the novice as a new member:[9]

Afterwards the initiated were considered neophyte members of the society, with all the rights and obligations of his rank. The Priest immediately had the obligation to reveal all the marks of recognition between the Vlamides or Brothers. Vlamides and Recommended were unaware of the revolutionary aims of the organisation. They only knew that there existed a society that tried hard for the general good of the nation, which included in its ranks important personalities. This myth was propagated deliberately, in order to stimulate the morale of members and also to make proselytism easier.

In 1818, the seat of Filiki Eteria had migrated from Odessa to Constantinople, and Skoufas' death had been a serious loss. The remaining founders attempted to find a major personality to take over the reins, one who would add prestige and fresh impetus to the society. In early 1818, they had a meeting with John Capodistria, who not only refused, but later wrote that he considered Filiki Eteria guilty for the havoc that was foreboded in Greece. Alexandros Ypsilantis was contacted and asked to assume leadership of Filiki Eteria,[5] which he did in April 1820. He began active preparations for a revolt and with the setting up of a military unit for the purpose that he named the Sacred Band. The society especially wanted to take advantage of the involvement of significant Ottoman forces, including the pasha of the Moreas, against Ali Pasha.