Todos-os-Santos All Saints Monastery of the Order of Santiago, Lisbon where Filipa used to live, today houses the French Embassy. 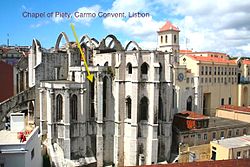 Capela da Piedade (Chapel of Piety) at Carmo, Lisbon where Filipa was buried.

Filipa Moniz Perestrelo (ca. 1455 – ca. 1484) was a Portuguese noblewoman from Porto Santo Island, in Madeira, Portugal. She was the wife of Christopher Columbus, married in 1479 in Vila Baleira on the island.

Filipa Moniz was the daughter of Isabel Moniz and Bartolomeu Perestrelo.[1] Prior to marrying she was one of the twelve elite Comendadoras of the Monastery of All Saints in Lisbon of the Military Order of St. James, which means she had a comendary.[2] Both of her stepsons, Ferdinand Columbus and Bartholomew Columbus, described her as a "noble Comendadora" residing in the Monastery of All Saints.[3]

Some writers[who?] question how Christopher Columbus, the son of a Genoese wool weaver, could marry the daughter of a Portuguese Knight of Santiago, member of the household of Prince John, Lord of Reguengos de Monsaraz (Master of Santiago,) and of Prince Henry the Navigator's household. However, Samuel Eliot Morison[4] wrote that this is "no great mystery." Filipa was "already about 25 years old," her mother was a widow "with slender means," and "her mother was glad enough to have no more convent bills to pay, and a son-in-law [...] who asked for no dowry."

Another view is presented by Portuguese professor Joel Silva Ferreira Mata, who researched All-Saints and its residents,[5] showed that as "member" of the Order of Santiago, in order for Filipa to marry the future Admiral Columbus, she, like all members, required authorization from Santiago's Master,[6] because, like all other religious and military orders, the Order of Santiago had its established rules and protocols by which it was governed.[7] The Master of Santiago from 1470 to 1492, thus governing at the time of Filipa's marriage, was King John II of Portugal. From this marriage was born Diego Columbus in 1479 or 1480 who went on to become 2nd Admiral of the Indies, 2nd Viceroy of the Indies and 3rd Governor of the Indies and who married King Fernando's cousin, María de Toledo y Rojas. Thus Filipa Moniz was daughter of a King's Captain, wife of a Viceroy and mother of another Viceroy.

Columbus had a second son, Fernando, from Beatriz Enriquez de Arana, after Filipa died, in 1488.

Filipa died in 1485. The cause of her death is unknown. She was buried in the Capela da Piedade (Chapel of Piety), which is the first chapel to the right of the main chapel in the Carmo Convent along with her sister, Izeu Perestrelo and her brother-in-law, Pedro Correia da Cunha.