Fillmore East was rock promoter Bill Graham's rock venue on Second Avenue near East 6th Street in the (at the time) Lower East Side neighborhood, now called the East Village neighborhood of the borough of Manhattan of New York City. It was open from March 8, 1968 to June 27, 1971 and featured some of the biggest acts in rock music at the time. The Fillmore East was a companion to Graham's Fillmore Auditorium, and its successor, the Fillmore West, in San Francisco, Graham's home base.

The theatre at 105 Second Avenue that became the Fillmore East was originally built as a Yiddish theater in 1925-26 – designed by Harrison Wiseman in the Medieval Revival style – at a time when the section of Second Avenue was known as the "Yiddish Theater District" and the "Jewish Rialto"[1] because of the numerous theatres that catered to a Yiddish-speaking audience. Called the Commodore Theater, and independently operated, it eventually was taken over by Loews Inc. and became a movie theater, the Loews Commodore. It later became the Village Theatre.[1][2] When Graham took over the theatre in 1967, it had fallen into disrepair. Despite the deceptively small marquee and façade, the theater had a capacity of almost 2,700.

The venue provided Graham with an East Coast counterpart to his existing Fillmore in San Francisco, California.[3] Opening on March 8, 1968, the Fillmore East quickly became known as "The Church of Rock and Roll," with two-show, triple-bill concerts several nights a week. Graham would regularly alternate acts between the East and West Coast venues. Until early 1971, bands were booked to play two shows per night, at 8 pm and 11 pm, on both Friday and Saturday nights.

Among the notable acts to play the Fillmore East was Jimi Hendrix. His album Band of Gypsys was recorded live on New Year's Day 1970. John Lennon and Yoko Ono sat in with Frank Zappa and the Mothers of Invention at the theater on June 6, 1971. The Allman Brothers Band played so many shows at Fillmore East that they were sometimes called "Bill Graham's House Band"; additionally, the Grateful Dead played a total of 43 concerts at the theater from June 1968 through April 1971. Jefferson Airplane performed six shows and Taj Mahal played eight shows at the venue, while Crosby, Stills, Nash and Young did four shows in September 1969 and six performances in June 1970.[4][5] Led Zeppelin made four appearances in early 1969, opening for Iron Butterfly. Amateur film footage of their January 31 performance can be viewed at the Led Zeppelin website.[6]

The Joshua Light Show, headed by Joshua White, was an integral part of many performances, with its psychedelic art lighting on a backdrop behind many live bands.[7] From the summer of 1970, Thereafter, the Pig Light Show became the house light show under the direction of Marc L. Rubinstein, trading duties until the venue's closing in 1971 with Joe's Lights, made up of former members of the Joshua Light Show.

National Educational Television taped a show on September 23, 1970 for broadcast. It featured The Byrds, Elvin Bishop Group, Albert King, Sha Na Na, Van Morrison, The Allman Brothers, and Joe's Lights. The show, "Welcome To Fillmore East" was aired on WNDT channel 13 in NYC and simulcast on WNEW-FM radio on October 10, 1970 at 10:00 PM in the NYC area. A thirty-minute clip from that show of the Allmans can be seen on YouTube.

Because of the auditorium's great acoustics, many live albums were recorded at the Fillmore East, including: 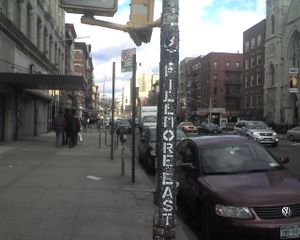 This signpost marks the spot, along with a plaque on the facade.

Because of changes in the music industry and large growth in the concert industry, Graham closed the Fillmore East. Its final concert took place on June 27, 1971, with the billed acts: The Allman Brothers Band, The J. Geils Band, Albert King, and special guests – Edgar Winter's White Trash, Mountain, The Beach Boys, and Country Joe McDonald – in an invitation-only performance.[8] The concert was simulcast live by New York City radio stations WPLJ and WNEW-FM, with between-set banter by many of New York's then-trend-setting disc jockeys – WPLJ's Dave Herman and Vin Scelsa and WNEW-FM's Scott Muni and Alison Steele (AKA the Night Bird) among them. The Allman Brothers Band set was released as the second disc of the deluxe edition/remastered version of their Eat a Peach (1972 and 2006) album.

On December 7, 1974, Barry Stuart (Stein), reopened the venue as the NFE Theatre – "NFE" standing for "New Fillmore East" – with a concert presenting Bachman-Turner Overdrive. It operated through 1975, but was renamed the "Village East", supposedly due to objections from Bill Graham over the use of the Fillmore name.

In 1980, the venue became The Saint, a private gay nightclub. As of 2013, the former lobby building is owned by the Apple Bank for Savings,[9] which has a branch at street level, and the rest of the interior of the auditorium has been demolished and replaced with an apartment complex, Hudson East, with its entrance at 225 East 6th Street.[10] The building at 105 Second Avenue is now part of the East Village/Lower East Side Historic District, created in October 2012.[2] In October 2014, the Greenwich Village Society for Historic Preservation unveiled a historic plaque on the building at a ceremony featuring Joshua White of the Joshua Light Show and guitarist Lenny Kaye.[11]

Live Nation resurrected the Fillmore East name by rebranding the renovated Irving Plaza as "The Fillmore New York at Irving Plaza" on April 11, 2007, with English pop music singer and songwriter Lily Allen as the opening act.[12] However, in May 2010 Live Nation conceded that the new name had not caught on and due to "unrelenting demand" the name "Irving Plaza" was restored beginning on June 23, 2010.[13]