From Infogalactic: the planetary knowledge core
Jump to: navigation, search
This article is about horses. Filly is also a small village in the Ardennes in Belgium.

A filly is a young female horse too young to be called a mare. There are two specific definitions in use. 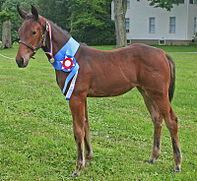 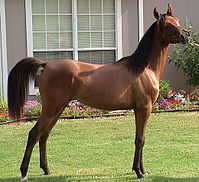 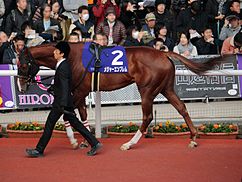 Fillies are sexually mature by age two and are sometimes bred at that age, but generally should not be bred until they themselves have stopped growing, usually by age four or five.[3] Some fillies may exhibit estrus as yearlings.

The equivalent term for a male is a colt. When horses of either sex are less than one year of age, they are referred to as foals.[4] Horses between one and two years of age may also be called yearlings.