The Venice Film Festival in Italy began in 1932, and is the oldest film festival still running. Raindance Film Festival is the UK's largest celebration of independent film-making, and takes place in London in October.[12]

North America's first and longest running short film festival is the Yorkton Film Festival, established in 1947.[13][14] The first film festival in the United States was the Columbus International Film & Video Festival, also known as The Chris Awards, held in 1953. According to the Film Arts Foundation in San Francisco, "The Chris Awards (is) one of the most prestigious documentary, educational, business and informational competitions in the U.S; (it is) the oldest of its kind in North America and celebrating its 54th year." It was followed four years later by the San Francisco International Film Festival, held in March 1957, which emphasized feature-length dramatic films. The festival played a major role in introducing foreign films to American audiences. Films in the first year included Akira Kurosawa's Throne of Blood and Satyajit Ray's Pather Panchali.

Film Funding competitions such as Writers and Filmmakers were introduced when the cost of production could be lowered significantly and internet technology allowed for the collaboration of film production.

Although there are notable for-profit festivals such as SXSW, most festivals operate on a nonprofit membership-based model, with a combination of ticket sales, membership fees, and corporate sponsorship constituting the majority of revenue. Unlike other arts nonprofits (performing arts, museums, etc), film festivals typically receive few donations from the general public and are occasionally organized as nonprofit business associations instead of public charities. Film industry members often have significant curatorial input, and corporate sponsors are given opportunities to promote their brand to festival audiences in exchange for cash contributions. Private parties, often to raise investments for film projects, constitute significant "fringe" events. Larger festivals maintain year-round staffs often engaging in community and charitable projects outside festival season.

On the other hand, some festivals—usually those accepting fewer films, and perhaps not attracting as many "big names" in their audiences as do Sundance and Telluride—require no entry fee. Rotterdam Film Festival, Mumbai Film Festival, and many smaller film festivals in the United States (the Stony Brook Film Festival on Long Island, the Northwest Filmmakers' Festival, and the Sicilian Film Festival in Miami), are examples.

The Portland International Film Festival charges an entry fee, but waives it for filmmakers from the Northwestern United States, and some others with regional focuses have similar approaches.

Screening out of competition

The core tradition of film festivals is competition, that is, the consideration of films with the intention of judging which are most deserving of various forms of recognition. In contrast to those films, some festivals may screen (i.e., project onto a movie screen before an audience) some films without treating them as part of the competition; the films are said to be "screened out..." (or "outside...") "of competition". 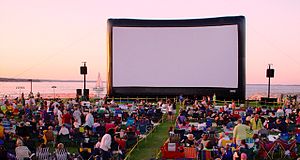 The three most prestigious film festivals are generally considered to be Cannes, Berlin and Venice.[16] These festivals are sometimes called the "Big Three."[17][18][19] Polish director Krzysztof Kieślowski's The Three Colors Trilogy were each made for these festivals, with Blue for Venice, White for Berlin, and Red for Cannes.[20]

The most notable online film festival is hosted by Culture Unplugged Studios[23][not in citation given] where over 20,000 film makers from over 120 countries participate on the online venue. The festivals are themed as We Speak Here, Humanity Explored, Green and Spirit Enlightened. The venue was the first one to launch the international scale documentary film network worldwide.[24]

Toronto's Hot Docs is the leading North American documentary film festival. Toronto also has the largest amount of film festivals in the world, ranging from cultural, independent, and historic films. The largest festival, in terms of the number of feature productions, is the Seattle International Film Festival, which screens 270 features, and approximately 150 short films.[citation needed] The Whistler Film Festival gets bigger every year, with more than 80 screenings and an industry summit.

The Sundance film festival is a major festival for independent film. The Vail Film Festival in Vail, Colorado, is one of the "Top 10 destination film festivals in the world," (MovieMaker magazine) It screens over 90 films, mostly by new filmmakers and rising stars.

The Havana Film Festival was founded in 1979 and is the oldest continuous annual film festival in the Caribbean. Its focus is on Latin American cinema. The Trinidad and Tobago Film Festival, founded in 2006, is dedicated to screening the newest films from the English-, Spanish, French- and Dutch-speaking Caribbean, as well as the region's diaspora. It also seeks to facilitate the growth of Caribbean cinema by offering a wide-ranging industry programme and networking opportunities.

Many film festivals are dedicated exclusively to animation.

A variety of regional festivals happen in various countries. Austin Film Festival is accredited by the Academy of Motion Picture Arts & Sciences®, which makes all their jury award-winning narrative short and animated short films eligible for an Academy Award®.

There are several significant film festivals held regularly in Africa. The biannual Panafrican Film and Television Festival of Ouagadougou (FESPACO) in Burkina Faso was established in 1969 and accepts for competition only films by African filmmakers and chiefly produced in Africa. The annual Durban International Film Festival in South Africa and Zanzibar International Film Festival in Tanzania have grown in importance for the film and entertainment industry, as they often screen the African premieres of many international films.

The Sahara International Film Festival, held annually in the Sahrawi refugee camps in western Algeria near the border of Western Sahara, is notable as the only film festival in the world to take place in a refugee camp. The festival has the two-fold aim of providing cultural entertainment and educational opportunities to refugees, and of raising awareness of the plight of the Sahrawi people, who have been exiled from their native Western Sahara for more than three decades.

The biggest European festival is the Cannes film festival in France along with Berlin and Venice.