Western films are those "set in the American West that embod[y] the spirit, the struggle and the demise of the new frontier."[1] Pictured is Clint Eastwood in the Western film A Fistful of Dollars (1964).

In film theory, film genre (/ˈʒɒnrə/ or /ˈdʒɒnrə/) refers to the method of categorizing films based on similarities in the narrative elements from which films are constructed or the emotional responses they elicit. Most theories of film genre are borrowed from literary genre criticism. Besides the basic distinction in genre between fiction and documentary (from which hybrid forms emerged founding new genres, docufiction and docudrama), film genres can be categorized in several ways.

The setting is the milieu or environment where the story and action takes place (e.g., a war film, a Western film or a space opera film). The theme or topic refers to the issues or concepts that the film revolves around (e.g., science fiction film, sports film or crime film). The mood is the emotional tone of the film (e.g., comedy film, horror film or tearjerker film). Format refers to the way the film was shot (e.g., anamorphic widescreen) or the manner of presentation (e.g.: 35 mm, 16 mm or 8 mm). Additional ways of categorizing film genres is by the target audience (e.g., children's film, teen film or women's film) or by type of production (e.g., B movie, big-budget blockbuster or low-budget film).

Film genres often branch out into subgenres, as in the case of the courtroom and trial-focused subgenre of drama known as the legal drama. Genres that at first may seem unrelated can be combined to form hybrid genres, such as the melding of horror and comedy in the Evil Dead films. Other popular genre combinations are the romantic comedy and the action comedy film.

American film historian Janet Staiger states that the genre of a film can be defined in four ways. The "idealist method" judges films by predetermined standards. The "empirical method" identifies the genre of a film by comparing it to a list of films already deemed to fall within a certain genre. The apriori method uses common generic elements which are identified in advance. The "social conventions" method of identifying the genre of a film is based on the accepted cultural consensus within society.[2] Martin Loop contends that Hollywood films are not pure genres, because most Hollywood movies blend the love-oriented plot of the romance genre with other genres.[2] Jim Colins claims that since the 1980s, Hollywood films have been influenced by the trend towards "ironic hybridization", in which directors combine elements from different genres, as with the Western/science fiction mix in Back to the Future Part III.[2]

Genre is often a vague term with no fixed boundaries, and many films also cross into multiple genres. Recently, film theorist Robert Stam challenged whether genres really exist, or whether they are merely made up by critics. Stam has questioned whether "genres [are] really 'out there' in the world or are they really the construction of analysts?". As well, he has asked whether there is a "... finite taxonomy of genres or are they in principle infinite?" and whether genres are "...timeless essences ephemeral, time-bound entities? Are genres culture-bound or trans-cultural?". Stam has also asked whether genre analysis should aim at being descriptive or prescriptive. While some genres are based on story content (the war film), other are borrowed from literature (comedy, melodrama) or from other media (the musical). Some are performer-based (Fred Astaire and Ginger Rogers films) or budget-based (blockbusters), while others are based on artistic status (the art film), racial identity (Race films), location (the Western), or sexual orientation (Queer cinema).[3]

Many genres have built-in audiences and corresponding publications that support them, such as magazines and websites. For example, horror films have a well-established fanbase that reads horror magazines such as Fangoria. Films that are difficult to categorize into a genre are often less successful. As such, film genres are also useful in the areas of marketing, film criticism and the analysis of consumption. Hollywood story consultant John Truby states that "...you have to know how to transcend the forms [genres] so you can give the audience a sense of originality and surprise."[4] Some screenwriters use genre as a means of determining what kind of plot or content to put into a screenplay. They may study films of specific genres to find examples. This is a way that some screenwriters are able to copy elements of successful movies and pass them off in a new screenplay. It is likely that such screenplays fall short in originality. As Truby says, "Writers know enough to write a genre script but they haven’t twisted the story beats of that genre in such a way that it gives an original face to it".[5]

There are other methods of dividing films into groups besides genre. For example, auteur critics group films according to their auteur-directors. Some groupings may be casually described as genres although the definition is questionable.[citation needed] For example, while independent films are sometimes discussed as if they are a genre in-and-of themselves, independent productions can belong to any genre. Similarly, while art films are referred to as a genre by film scholar David Bordwell, who states that "art cinema itself is a [film] genre, with its own distinct conventions",[6] an art film can be in a number of genres (e.g., drama, experimental film, black comedy, etc.). 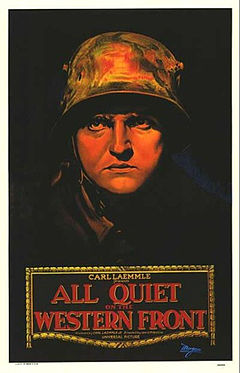 War film or anti-war movie: Lewis Milestone's All Quiet on the Western Front, 1930

It is hard to draw up a classification of genres. This is because «a genre is easier to recognize than to define» and therefore «most academics today agree that any genre cannot be identified in a rigid way".[7] Furthermore, different countries and cultures define genres in different ways. A typical example are war movies. In US, they are mostly related to the two World Wars, whereas in other countries, movies related to wars in other historical periods are considered war movies.

Film genres may appear to be readily categorizable from the setting of the film. Nevertheless, films with the same settings can be very different, due to the use of different themes or moods. For example, while both The Battle of Midway and All Quiet on the Western Front are set in a wartime context and might be classified as belonging to the war film genre, the first examines the themes of honor, sacrifice, and valour, and the second is an anti-war film which emphasizes the pain and horror of war. While there is an argument that film noir movies could be deemed to be set in an urban setting, in cheap hotels and underworld bars, many classic noirs take place mainly in small towns, suburbia, rural areas, or on the open road.[8]

The editors of filmsite.org argue that animation, pornographic film, documentary film, silent film and so on are non-genre-based film categories.[9]