Final War of the Roman Republic

The final war of the Roman Republic, also known as Antony's civil war or the war between Antony and Octavian, was the last of the Roman civil wars of the republic, fought between Cleopatra (assisted by Mark Antony) and Octavian. After the Roman Senate declared war on the Egyptian queen Cleopatra, Antony, her lover and ally, betrayed the Roman government and joined the war on Cleopatra’s side. After the decisive victory for Octavian at the Battle of Actium, Cleopatra and Antony withdrew to Alexandria, where Octavian besieged the city until both Antony and Cleopatra committed suicide.

Following the end of the war, Octavian brought peace to the Roman state that had been plagued by a century of civil wars. Octavian became the most powerful man in the Roman world and the Senate bestowed upon him the name of Augustus in 27 BC. Octavian, now Augustus, would be the first Roman Emperor and would transform the oligarchic/democratic Republic into the autocratic Roman Empire.

The last Republican Civil War would mark the beginning of the Pax Romana, which remains the longest period of peace and stability that Europe has seen in recorded history.

The Caesarians Octavian (Caesar's principal, though not sole, heir), Mark Antony, and Marcus Lepidus under the Second Triumvirate had stepped in to fill the power vacuum caused by Julius Caesar's assassination. After the Triumvirate had defeated Marcus Junius Brutus and Gaius Cassius Longinus at the Battle of Philippi (42 BC) and Lepidus was expelled from the Triumvirate (36 BC), Octavian and Antony were left as the two most powerful men in the Roman world. Octavian took control of the west, including Hispania, Gaul, Italia, and Africa. Antony received control of the east, including Graecia, Asia, Syria and Aegyptus.

For a time, Rome saw peace. Octavian put down revolts in the west while Antony reorganized the east; however, the peace was short lived. Antony had been having an affair with the queen of Egypt, Cleopatra. Rome, especially Octavian, took note of Antony’s actions. Since 40 BC, Antony had been married to Octavia Minor, the sister of Octavian. Octavian seized the opportunity and had his minister Gaius Maecenas produce a propaganda campaign against Antony.

In response, Octavian increased the personal attacks against Antony, but the Senate and people of Rome were not convinced. Octavian’s chance came when Antony married Cleopatra in 32 BC before he divorced Octavia. That action combined with information that Antony was planning to establish a second Senate in Alexandria created the perfect environment for Octavian to strip Antony of his power.

Octavian summoned the Senate and accused Antony of anti-Roman sentiments. Octavian had illegally seized Antony’s will from the Temple of Vesta. In it, Antony recognized Caesarion as Caesar's legal heir, left his possessions to his children by Cleopatra, and finally indicated his desire to be buried with Cleopatra in Alexandria instead of in Rome. The Senators were not moved by Caesarion or Antony’s children but Antony’s desire to be buried outside of Rome invoked the Senate’s rage. Octavian, the natural politician he was, blamed Cleopatra and not Antony. The Senate declared war on Cleopatra, and Octavian knew that Antony would come to her aid.

When Cleopatra received word that Rome had declared war, Antony threw his support to Egypt. Immediately, the Senate stripped Antony of all his official power and labeled him as an outlaw and a traitor. Octavian summoned all of his legions, numbered at almost 200,000 Roman legionaries. Cleopatra and Antony did the same, assembling roughly the same number in mixed heavy Roman and light Egyptian infantry. 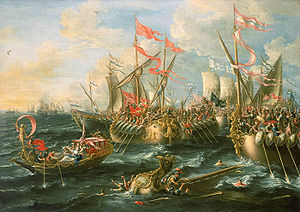 The Battle of Actium by Laureys a Castro. This was the decisive battle of the naval theater.

By mid-summer of 31 BC, Antony maneuvered his army into Greece and Octavian soon followed. Octavian brought with him his chief military advisor and closest friend Marcus Vipsanius Agrippa to command his naval forces. Although the ground forces were comparable, Octavian's fleet was superior. Antony's fleet was made up of large vessels, but with inexperienced crews and commanders. Octavian's fleet of smaller, more maneuverable vessels was filled with experienced sailors.

Octavian moved his soldiers across the Adriatic Sea to confront Antony near Actium. Meanwhile, Agrippa disrupted Antony's supply lines with the navy. Gaius Sosius commanded a squadron in Mark Antony's fleet with which he managed to defeat the squadron of Lucius Arruntius and put it to flight, but when the latter was reinforced by Agrippa, Sosius's ally Tarcondimotus - the king of Cilicia - was killed and Sosius himself was forced to flee.

Octavian decided not to attack and risk unnecessary losses. Instead, Octavian wanted to battle Antony by sea where his experienced sailors could dominate. In response, Antony and Octavian engaged in Fabian strategy until the time was right. As the summer ended and autumn began to set in, both Octavian and Antony settled for a battle of attrition. The strategy of delay paid dividends to Octavian, as morale sank and prominent Romans deserted Antony's cause.

The first conflict of the war occurred when Octavian's general Agrippa captured the Greek city and naval port of Methone. The city had previously been loyal to Antony. Although Antony was an experienced soldier, he did not understand naval combat, which led to his downfall. Antony moved his fleet to Actium where Octavian’s navy and army had taken camp. In what would become known as the Battle of Actium, Antony, on September 2, 31 BC, moved his large quinqueremes through the strait and into the open sea. There, Octavian’s light and maneuverable Liburnian ships drew in battle formation against Antony’s warships. Cleopatra stayed behind Antony’s line on her royal barge.

A devastating blow to Antony’s forces came when one of Antony’s former generals delivered to Octavian Antony’s battle plan. Antony had hoped to use his biggest ships to drive back Agrippa's wing on the north end of his line, but Octavian's entire fleet stayed carefully out of range. Shortly after mid-day, Antony was forced to extend his line out from the protection of the shore, and then finally engage the enemy. Octavian's fleet, armed with better trained and fresher crews, made quick work of Antony’s larger and less experienced navy. Octavian’s soldiers had spent years fighting in Roman naval combat, where one objective was to ram the enemy ship and at the same time kill the above deck crew with a shower of arrows and catapult-launched stones large enough to decapitate a man.

As the armies stood on either side of the naval battle, they watched as Antony was being outmatched by Agrippa. Seeing that the battle was going against Antony, Cleopatra's fleet retreated to open sea without firing a shot, leaving Antony to fight for himself. As a gap opened in Agrippa's blockade, she funneled through, and was soon closely followed by Antony's command ships. The commanders of Antony's land forces, which were supposed to follow him to Asia, promptly surrendered their legions without a fight. Antony retreated to a smaller vessel with his flag and managed to escape to Alexandria. By the end of the day, Antony’s entire fleet would lie at the bottom of the sea and the Roman world had witnessed the largest naval battle in almost 200 years.

Even though Octavian wanted to immediately pursue Antony and Cleopatra, many of his veterans wanted to retire and return to private life. Octavian allowed many of his longest serving veterans (as many as 10 legions by some accounts) to retire. Many of those legionaries could trace their service to Julius Caesar some 20 years earlier.

After the winter ended, Octavian resumed the hunt. In the spring of 30 BC, Octavian rejected the idea of transporting his army across the sea and attacking Alexandria directly, and instead traveled by land through Asia. Antony had received much of his backing from Rome’s client kingdoms in the east. By marching his army by land, he ensured Antony could not regroup and cement his authority over the provinces.

The Death of Cleopatra by Reginald Arthur.

Meanwhile, Antony attempted to secure an army in Cyrenaica from Lucius Pinarius. Unfortunately for Antony, Pinarius had switched his loyalty to Octavian. When Octavian received word of this development, he ordered Pinarius to move his four legions east towards Alexandria while Octavian would move west. Trapped in Egypt with the remnant of his former army, Antony and Cleopatra bided their time awaiting Octavian's arrival.

When Octavian and Pinarius arrived at Alexandria, they placed the entire city under siege. Before Octavian had arrived, Antony took the roughly 10,000 soldiers he had left and attacked Pinarius, unaware that he was outnumbered 2 to 1. Pinarius destroyed what was left of Antony’s army with Antony escaping back to Alexandria before Octavian arrived. As Octavian approached with his legions, what remained of Antony's cavalry and fleet surrendered to Octavian. Most of Antony’s infantry surrendered without any engagement at this stage of the conflict, and Antony's cause was lost.

Antony was forced to watch as his army and hopes of dominance in Rome were handed to Octavian. In honorable Roman tradition, Antony, on August 1, 30 BC, fell on his sword. According to the ancients accounts however, he was not entirely successful and with an open wound in his belly, was taken to join Cleopatra, who had fled to her mausoleum. Here Antony succumbed to his wound and supposedly died in his lover's arms, leaving her alone to face Octavian.

Cleopatra did not immediately follow Antony in suicide. Instead, in a last-ditch effort, Cleopatra opened negotiations with Octavian. Cleopatra begged Octavian to spare Caesarion’s life in exchange for willing imprisonment. Octavian refused. Within a week, Octavian informed Cleopatra that she was to play a role in Octavian's Triumph back in Rome. This role was "carefully explained to her", while Caesarion was "butchered without compunction". Octavian supposedly said "two Caesars are one too many" as he ordered Caesarion's death.[3] According to Strabo who was alive at the time of the event, Cleopatra died from a self-induced bite from a venomous snake, or from applying a poisonous ointment to herself.[4] With Cleopatra's death, the final war of the Republic was over. 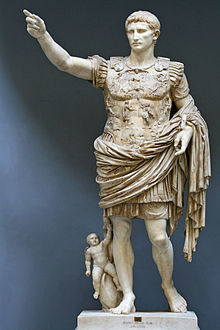 Due to this war, Octavian would become Augustus and the first Roman Emperor.

Within a month, Octavian was named Pharaoh, and Egypt became his personal possession. By executing Antony's supporters, Octavian finally brought a century of civil war to a close. Within a few years, Octavian was named Augustus by the Senate and given unprecedented powers. Octavian, now Augustus, transformed the Republic into the Roman Empire, ruling it as the first Roman emperor.

In the ensuing months and years, Augustus passed a series of laws that, while outwardly preserving the appearance of the Republic, made his position within it of paramount power and authority. He laid the foundations for what is now called the Roman Empire. From then on, the Roman state would be ruled by a Princeps (first citizen); in modern terms, Rome would from now on be ruled by Emperors.

The Senate ostensibly still had power and authority over certain Senatorial provinces, but the critical border provinces, such as Syria, Egypt, and Gaul, requiring the greatest numbers of legions, would be directly ruled by Augustus and succeeding Emperors.

With the end of the last Republican civil war, the Republic was replaced by the Empire. The reign of Augustus would usher in the golden era of Roman culture and produce a stability which Rome had not seen in over a century. With Rome in control of the entire Mediterranean world, a peace would reign in the Roman world for centuries after the death of Augustus: the so-called Pax Romana (Roman Peace).

The Empire that Augustus established would last in Western Europe until the fall of Rome in the 5th century AD. The Eastern part of the Roman Empire would also survive as the Byzantine Empire until the fall of Constantinople in AD 1453.