The Financial Information eXchange (FIX) protocol is an electronic communications protocol initiated in 1992 for international real-time exchange of information related to the securities transactions and markets. With trillions of dollars traded annually on the NASDAQ alone, financial service entities are investing heavily in optimizing electronic trading and employing direct market access (DMA) to increase their speed to financial markets. Managing the delivery of trading applications and keeping latency low increasingly requires an understanding of the FIX protocol.

The FIX Protocol specification was originally authored in 1992 by Robert "Bob" Lamoureux and Chris Morstatt to enable electronic communication of equity trading data between Fidelity Investments and Salomon Brothers. FIX initially addressed information between broker-dealers and their institutional clients. At the time, this information was communicated verbally over the telephone. Fidelity realized that information from their broker-dealers could be routed to the wrong trader, or simply lost when the parties hung up their phones. It wanted such communications to be replaced with machine readable data which could then be shared among traders, analyzed, acted on and stored. For example, broker-dealers call with an indication of interest (IOI) to buy or sell a block of stock. The FIX initiative created new messages such as the IOI.

According to the FIX Trading Community, FIX has become the de facto messaging standard for pre-trade and trade communication in the global equity markets, and is expanding into the post-trade space to support straight-through processing, as well as continuing to expand into foreign exchange, fixed income and derivatives markets.[1]

The FIX Trading Community is the non-profit, industry-driven standards body with the mission to address the business and regulatory issues impacting multi-asset trading across the global financial markets through the increased use of standards, including the FIX Protocol messaging language, delivering operational efficiency, increased transparency, and reduced costs and risk for all market participants.

The message fields are delimited using the ASCII 01 <start of header> character. They are composed of a header, a body, and a trailer.

The content in the body of the message is specified by (tag 35, MsgType) message type defined in the header .

The last field of the message is tag 10, FIX Message Checksum. It is always expressed as a three-digit number (e.g. 10=002).

In the above FIXMessage Body length 9 is correct and checksum 10 was checked out by using the source available from QuickFIX, an open-source FIX implementation.

FIX is widely used by both the buy side (institutions) as well as the sell side (brokers/dealers) of the financial markets. Among its users are mutual funds, investment banks, brokers, stock exchanges and ECNs. See FIX Protocol Organization for an extensive list of major FIX users.

FIX has become the standard electronic protocol for pre-trade communications and trade execution. Although it is mainly used for equity transactions in the front office area, bond, derivatives and FX-transactions are also possible. One could say that whereas SWIFT is the standard for back office messaging, FIX is the standard for front office messaging. However, today, the membership of FIX Protocol Ltd. is extending FIX into block trade allocation and other phases of the trading process, in every market, for virtually every asset class.

FIX Session is layered on TCP (Transmission Control Protocol). FIX is more popular than FIXML in Securities Trading because FIXML messages are much larger in size due to XML tags.

FIX messages are formed from a number of fields, each field is a tag value pairing that is separated from the next field by a delimiter SOH (0x01). The tag is an integer that indicates the meaning of the field. The value is an array of bytes that hold a specific meaning for the particular tag (e.g. tag 48 is securityID, a string that identifies the security; tag 22 is IDSource, an integer that indicates the identifier class being used). The values may be in plain text or encoded as pure binary (in which case the value is preceded by a length field). The FIX protocol defines meanings for most tags, but leaves a range of tags reserved for private use between consenting parties.

The FIX protocol also defines sets of fields that make a particular message, within the set of fields some will be mandatory and others optional. The ordering of fields within the message is generally unimportant, however repeating groups are preceded by a count and encrypted fields are preceded by their length. The message is broken into three distinct sections: the head, body and tail. Fields must remain within the correct section and within each section the position may be important as fields can act as delimiters that stop one message from running into the next. The final field in any FIX message is tag 10 (checksum).

There are two main groups of messages—admin and application. The admin messages handle the basics of a FIX session. They allow for a session to be started and terminated and for recovery of missed messages. The application messages deal with the sending and receiving of trade-related information such as an order request or information on the current state and subsequent execution of that order.

Body length is the character count starting at tag 35 (included) all the way to tag 10 (excluded). SOH delimiters do count in body length.
For Example: (SOH have been replaced by'|')

Has a Body length of 65.
The SOH delimiter at the end of a Tag=Value belongs to the Tag.

The checksum algorithm of FIX consists of summing up the decimal value of the ASCII representation all the bytes up to the checksum field (which is last) and return the value modulo 256.

Transport Independence also paves the way for transport protocols such as message queues and web services to be used instead of traditional FIX over TCP. 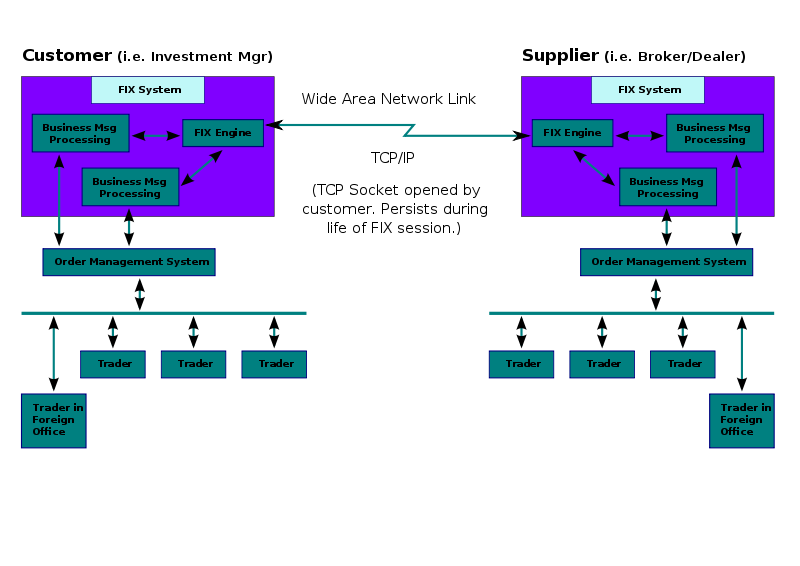