Financial regulation is a form of regulation or supervision, which subjects financial institutions to certain requirements, restrictions and guidelines, aiming to maintain the integrity of the financial system. This may be handled by either a government or non-government organization. Financial regulation has also influenced the structure of banking sectors, by decreasing borrowing costs and increasing the variety of financial products available.

The objectives of financial regulators are usually:[1]

Acts empower organizations, government or non-government, to monitor activities and enforce actions.[2] There are various setups and combinations in place for the financial regulatory structure around the global.[3][4] Leaf parts are in any case:

Exchange acts ensure that trading on the exchanges is conducted in a proper manner. Most prominent the pricing process, execution and settlement of trades, direct and efficient trade monitoring.[5][6]

Asset management supervision or investment acts ensures the frictionless operation of those vehicles.[10]

Banking acts lay down rules for banks which they have to observe when they are being established and when they are carrying on their business. These rules are designed to prevent unwelcome developments that might disrupt the smooth functioning of the banking system. Thus ensuring a strong and efficient banking system.[11][12] 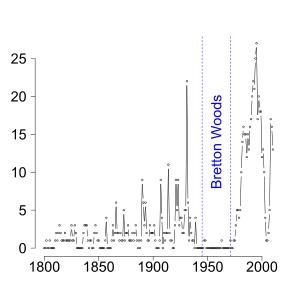 Number of countries having a banking crisis in each year since 1800. This is based on www.reinhartandrogoff.com (web site for This Time is Different: Eight Centuries of Financial Folly), which covers only 70 countries. The general upward trend might be attributed to many factors. One of these is a gradual increase in the percent of people who receive money for their labor. The dramatic feature of this graph is the virtual absence of banking crises during the period of the Bretton Woods agreement, 1945 to 1971. This analysis is similar to Figure 10.1 in Reinhart and Rogoff (2009). For more details see the help file for "bankingCrises" in the Ecdat package available from the Comprehensive R Archive Network (CRAN).

In most cases, financial regulatory authorities regulate all financial activities. But in some cases, there are specific authorities to regulate each sector of the finance industry, mainly banking, securities, insurance and pensions markets, but in some cases also commodities, futures, forwards, etc. For example, in Australia, the Australian Prudential Regulation Authority (APRA) supervises banks and insurers, while the Australian Securities and Investments Commission (ASIC) is responsible for enforcing financial services and corporations laws.

Sometimes more than one institution regulates and supervises the banking market, normally because, apart from regulatory authorities, central banks also regulate the banking industry. For example, in the USA banking is regulated by a lot of regulators, such as the Federal Reserve System, the Federal Deposit Insurance Corporation, the Office of the Comptroller of the Currency, the National Credit Union Administration, the Office of Thrift Supervision, as well as regulators at the state level.[13]

In addition, there are also associations of financial regulatory authorities. At the international level, there is the International Organization of Securities Commissions (IOSCO), the International Association of Insurance Supervisors, the Basel Committee on Banking Supervision, the Joint Forum, and the Financial Stability Board, where national authorities set standards through consensus-based decision-making processes.[14]

The structure of financial regulation has changed significantly in the past two decades, as the legal and geographic boundaries between markets in banking, securities, and insurance have become increasingly "blurred" and globalized.

Think-tanks such as the World Pensions Council (WPC) have argued that most European governments pushed dogmatically for the adoption of the Basel II recommendations, adopted in 2005, transposed in European Union law through the Capital Requirements Directive (CRD), effective since 2008. In essence, they forced European banks, and, more importantly, the European Central Bank itself e.g. when gauging the solvency of EU-based financial institutions, to rely more than ever on the standardized assessments of credit risk marketed by two private US agencies- Moody’s and S&P, thus using public policy and ultimately taxpayers’ money to strengthen an anti-competitive duopolistic industry.