The Finger Lakes are a group of eleven long, narrow, roughly east-west lakes in a region called the finger lakes region in Central New York in the United States. This region is defined as a bioregion. They are a popular tourist destination.

Oneida Lake is generally not considered one of the Finger Lakes, but it is sometimes called the "thumb", while Seneca is the middle finger. 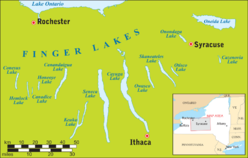 Map of the Finger Lakes

The eleven Finger Lakes from east to west are:

Cazenovia Lake to the east, although smaller, is sometimes called "the twelfth Finger Lake," because it is similar in shape, located in Appalachian hill terrain, with a historic village linked to other Finger Lakes by US 20. It may have been formed in the same manner as the Finger Lakes, as satellite photos show three valleys similar in character and spacing to the Finger Lakes east of Otisco Lake. The first is the Tully Valley, which includes a chain of small lakes at the south end that could be a "Finger Lake" that never formed because of a terminal moraine. The moraine caused the Tioughnioga River to flow south instead of north, the opposite of the other waters of the Finger Lakes. The next two valleys to the east contain Butternut Creek, which flows north, and the East Branch of the Tioughnioga River, which flows south. The next valley contains Limestone Creek, which flows north. The next valley after that contains Cazenovia Lake. 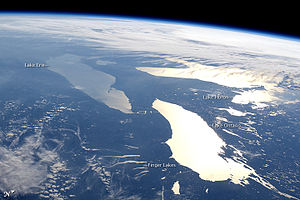 The Finger Lakes are in the center bottom of this west facing image; Lake Erie (upper left), Lake Huron (upper right), and Lake Ontario (lower right) are three of the Great Lakes

Oneida Lake, to the northeast of Syracuse, New York, is sometimes included as the "thumb," although it is shallow and somewhat different in character from the rest. Onondaga Lake, though located just north of the Finger Lakes region, is not considered one of the Finger Lakes. As with Oneida and Cazenovia Lakes, it drains into Lake Ontario and the St. Lawrence River. Likewise, Chautauqua Lake and Kinzua Lake to the west are not considered Finger Lakes; both drain into the Allegheny River and eventually into the Gulf of Mexico, and in the case of Kinzua, the lake is an artificial creation.

Conesus, Hemlock, Canadice, Honeoye, and Otisco are considered the minor Finger Lakes. Other, smaller lakes, including Silver, Waneta, and Lamoka lakes, dot this region. Silver Lake, west of Conesus Lake, would seem to qualify because it is in the Great Lakes watershed, but Waneta and Lamoka lakes are part of the Susquehanna River watershed as they drain into a tributary of the Chemung River.

East of Oneida and Cazenovia Lakes are the headwaters of the Susquehanna River and Hudson River watersheds (the former in the foothills of the Catskills, the latter through the Mohawk Valley and southern Adirondack Mountains).

The 2,000-acre (8 km2) muckland of a valley located in Potter, New York, which is part of Torrey Farms, was almost a twelfth Finger Lake, as the waterline is just below the surface. It lies between Canandaigua and Seneca lakes and was once a swamp. 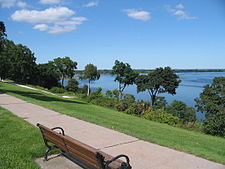 The lakes originated as a series of northward-flowing streams. Around two million years ago the first of many continental glaciers of the Laurentide Ice Sheet moved southward from the Hudson Bay area, initiating the Pleistocene glaciation. These scouring glaciers widened, deepened and accentuated the existing river valleys. Glacial debris, possibly terminal moraine left behind by the receding ice, acted as dams, allowing lakes to form. Despite the deep erosion of the valleys, the surrounding uplands show little evidence of glaciation, suggesting that the ice was thin, or at least unable to cause much erosion at these higher altitudes. The deep cutting by the ice left some tributaries hanging high above the lakes—both Seneca and Cayuga have tributaries hanging as much as 120 m above the valley floors.[1]

Much of the Finger Lakes area lies upon the Marcellus Shale and the Utica Shale, two prominent natural gas reserves. Due to the recent popularization of fracking technology the natural gas is now available to extraction. While some large landowners have leased their lands, and a number of small landowners would like to follow suit, many residents of the Finger Lakes oppose the process of extraction due to concerns about contamination of groundwater and the industrial impact of the extraction related activities. The first direct actions and local legislative actions against fracking occurred in the Finger Lakes bioregion.[2] 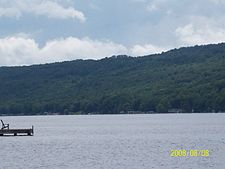 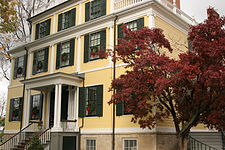 The Finger Lakes region contains evidence of pre-Iroquois habitation, such as The Bluff Point Stoneworks, but little is known about who may have constructed these enigmatic works.

As one of the most powerful Indian nations during colonial times, the Iroquois were able to prevent European colonization of the Finger Lakes region for nearly two centuries after first contact. By the late 18th century Iroquois power had weakened, relative to the European-Americans, and internal strife eroded the political unity of the Iroquois Confederacy. During the American Revolutionary War some Iroquois sided with the British and some with the Americans, resulting in civil war among the Iroquois. In the late 1770s, British-allied Iroquois attacked various American frontier settlements, prompting counter-attacks, culminating in the Sullivan Expedition of 1779, which destroyed most of the Iroquois towns and effectively broke Iroquois power. After the Revolutionary War, the Iroquois and other Indians of the region were assigned reservations. Most of their land, including the Finger Lakes region, was opened up to purchase and settlement.

Roughly the western half of the Finger Lakes region comprised the Phelps and Gorham Purchase of 1790. The region was rapidly settled at the turn of the 19th century, largely by a westward migration from New England, and to a lesser degree by northward influx from Pennsylvania. The regional architecture reflects these area traditions of the Federal and Greek Revival periods. 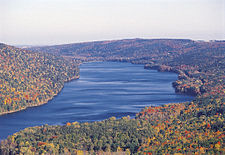 The Finger Lakes region, together with the Genesee Country of Western New York, has been referred to as the burned-over district, where, in the 19th century, the Second Great Awakening was a revival of Christianity, and some new religions were also formed. The region was active in reform and utopian movements. Many Underground Railroad sites have been documented. The Harriet Tubman Home at Auburn recalls the life and work of the African-American "Moses of her people." On the northern end of the Finger Lakes are also Seneca Falls, the birthplace of the Women's suffrage movement; Waterloo, the birthplace of Memorial Day; and Palmyra, the birthplace of The Church of Jesus Christ of Latter-day Saints (LDS Church). An annual outdoor drama, The Hill Cumorah Pageant, produced by the LDS Church, draws thousands of visitors each year.

Hammondsport was the home of aviation pioneer Glenn Curtiss, and the favorable air currents make the area a popular spot for glider pilots. Elmira, just to the south, was the home of Mark Twain in his later life, and the site of an infamous Civil War prison. Corning is most noted as the home of Corning Glass Works and the Corning Museum of Glass. Hornell, just southwest of the Finger Lakes was a major railroad center. Locomotives were repaired there until recently. Conesus, New York remains the home of the oldest producer of pure grape sacramental wine in the Western hemisphere. 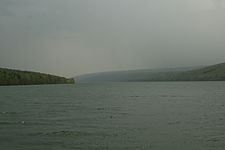 Hemlock Lake, one of the western Finger Lakes

Notable among the historic buildings of the region (most linked below) is the Granger Homestead (1816), a large village house in Federal Style at Canandaigua, New York. Another example of the Federal Style is the Prouty-Chew House (1829) at Geneva, portions of which were altered at various times in new fashions. Three Greek Revival mansions are situated near three lakes: The Richard DeZeng House, Skaneateles (1839), Rose Hill, Geneva (1839), and Esperanza, Penn Yan (1838). The latter two are open to the public. The Seward House in Auburn, a National Historic Landmark, is a mansion more characteristic of the Civil War era, virtually unchanged from the nineteenth century. Belhurst Castle, Geneva, a stone mansion in the Romanesque Revival style, now serves as an inn. Sonnenberg mansion at Canandaigua is later nineteenth-century residence in the Queen Anne style, known for its restored period gardens. Geneva on the Lake is a villa (1910–14) that recalls those on Italian lakes. Now an inn, it has gardens in the European manner. Many buildings and historic districts of the Finger Lakes region are notable, other than these historic houses.

Implemented in August 2010, the Hemlock-Canadice State Forest covers 6,684 acres (27.05 km2) that encompass the two western Finger Lakes, Hemlock and Canadice Lakes. These lakes have provided drinking water for the City of Rochester for more than 100 years. To protect water quality, the city acquired much of the property around the lakes. Over the decades, the land reforested, but a few traces of its past, such as stone walls or cottage foundations, remain. Today these two lakes, with their steep, forested, largely undeveloped shorelines and deep clear water, provide visitors a glimpse of the Finger Lakes of the past. The Department of Environmental Conservation (DEC) manages this State Forest for compatible public access for recreation, including fishing, hunting, nature study, boating and hiking. Activities in Hemlock-Canadice State Forest are subject the DEC’s Rules and Regulations for the Use of State Lands, 6 NYCRR Part 190, as well as any other applicable state statutes, rules and regulations. These are sensitive areas because they protect public drinking water.

Hemlock Lake is home to the state's oldest nesting bald eagle site, dating back to the early 1960s. The nesting bald eagles of Hemlock Lake have fostered a resurgence of bald eagles throughout New York State. Hemlock Lake, originally known as "O-Neh-Da" which is Seneca for "Lake of Hemlock Trees", is home to the nation's oldest sacramental winery, founded by Bishop McQuaid in 1872. Today, O-Neh-Da Vineyard still remains, making premium natural pure grape wine for churches and foodies alike. 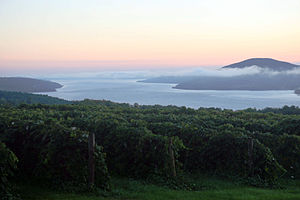 The Finger Lakes area is New York's largest wine producing region. Over 100 wineries and vineyards are located around Seneca, Cayuga, Canandaigua, Keuka, Conesus and Hemlock Lakes. Because of the lakes' great depth, they provide a lake effect to the lush vineyards that flank their shores. Retaining residual summer warmth in the winter, and winter's cold in the spring, the grapes are protected from disastrous spring frost during shoot growth, and early frost before the harvest. The main grape varieties grown are Chardonnay, Riesling from Alsace region in France, Gewürztraminer (idem), Pinot noir (idem), Cabernet Franc, Vidal blanc, Seyval blanc and many Vitis labrusca (American native) varieties or cultivars. With the passage of the Farm Winery Act in 1976, numerous wineries are now open to visitors. Wineries are a growth industry of the region, contributing through their production and by attracting visitors. Many wineries are concerned about the longterm economic effects of the procedure of fracking on tourism and ground water quality.[citation needed] 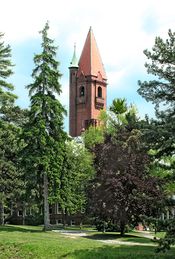 The Finger Lakes region is home to several museums. These include the Corning Museum of Glass, the Johnson Museum of Art at Cornell University, the Strong National Museum of Play, Glenn H. Curtiss Museum, Finger Lakes Boating Museum, Wings of Eagles Discovery Center, Sciencenter, Museum of the Earth, National Soaring Museum the Rockwell Museum, the Seward House Museum William H. Seward and the Samuel Warren Homestead of the York Historical Society, birthplace of NYS' first successful commercial winery. The Women's Rights National Historic Park is located in Seneca Falls. The park includes the home of Elizabeth Cady Stanton and the Wesleyan Chapel where she held the first convention on women's rights in 1848.