Finike, the ancient Phoenicus (Ancient Greek: Φοινικοῦς), also formerly Phineka,[3] is a district on the Mediterranean coast of Antalya Province in Turkey, to the west of the city of Antalya, along the Turkish Riviera. It is located on the southern shore of the Teke peninsula, and the coast here is a popular tourist destination. However, Finike is best known for its oranges, the symbol of the town.

For centuries Finike, then named Phoenicus, was a trading port, the main port of Limyra, the capital city of Lycia. Phoenicus was said to have been founded by Phoenicians in the 5th century BC, and thus named after its founders.

The area has been inhabited for much longer than that; archaeologists have found evidence near the town of Elmalı showing that the Teke peninsula has been settled since 3000 BC (although on the coast nothing has been uncovered dating before 2000 BC).

Trade along the coast was established first by the Persians, who relinquished Lycia to the armies of Alexander the Great. However, the coast was always vulnerable to forces from Syria, Egypt and Rhodes until it was brought within the empire of the Ancient Romans and the succeeding Byzantines. Even then the Byzantines were threatened by the Arabian armies coming from the Arabian Peninsula. Eventually the area was lost to the Seljuk Turks in the 13th century. These were succeeded by the Ottoman Empire from 1426.

The town was inhabited by Greeks prior to the 1923 population exchange between Greece and Turkey.[4]

The district has a population of 46138 according to the 2010 census.[5] The town itself has 11.329 inhabitants. Finike has 4 municipalities(Hasyurt, Sahilkent, Turunçova and Yeşilyurt) and 14 villages. 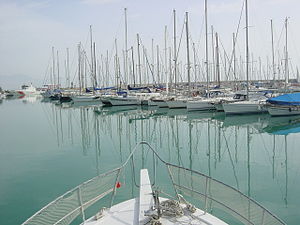 The local economy depends on agriculture, particularly oranges and other citrus fruits. This is supplemented by income from tourism in the summertime, although because of the lucrative orange production and the distance from Antalya Finike has not seen the large-scale tourism boom that has so radically changed the other coastal districts of Antalya. Finike is a quiet district where people buzz around on mopeds going about their daily lives. Indeed many of the visitors that Finike does attract are retired people in search of relaxation. That's mostly because of the construction policy of 1980. That policy made the land more suitable for investment in agriculture rather than in hotels, luxury apartments and other tourist attractions.

A type of pale limestone is quarried at Limyra, and sold as a decorative building material. It's cream colored with a homogeneous structure. Moreover it's extremely light and that makes it a perfect for building walking alleys and streets where only light vehicles are passing. The geologist classify the Limura limestone as with medium density.[6]

The port of Finike is now a yacht marina, and has a small fishing fleet. The coast is rich in marine life, including sea turtles, and fish, including local specialities red porgy (Sparidae) and grouper (Epinephelus); other fish found along the coast include leerfish (Carangidae) and the more widespread Mediterranean varieties such as bluefish, sea bream, sea bass, with swordfish, sardines and others found further out to sea. However, the coast suffers from overfishing, and many varieties, including the porgy, are in decline.

The beaches of Finike are an important nesting ground for Caretta caretta sea turtles, and the rocky parts of the coast are used by the rare Mediterranean monk seal.

There are doubtless many more places of antiquity that need to be restored.