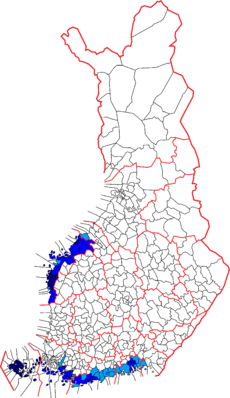 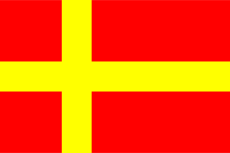 Unofficial flag of the Swedish-speakers in Finland

Finland Swedish or Fenno-Swedish[1] (Swedish: finlandssvenska, Finnish: suomenruotsi) is a general term for a closely-related group of dialects of Swedish spoken in Finland by the Swedish-speaking population as their first language. For the most part, these dialects and the dialects spoken in Sweden are mutually intelligible, although some archaic Swedish dialects in Ostrobothnia are practically unintelligible to Swedish-speaking people in southern Finland (and in Sweden). Most Swedish-speaking Finns emphasize that Finland Swedish is not a language separate from the Swedish of Sweden. The Swedish dialects in Finland are considered varieties of Swedish, and the norm for written Standard Swedish is completely applicable also for Finland Swedish.

Swedish as spoken in Finland is regulated by the Swedish Department of the Institute for the Languages of Finland. This regulation includes the officially stated aim of keeping Finland Swedish close to the Swedish as spoken in Sweden and strongly phrased advice against loanwords and calques from Finnish, which are usually incomprehensible to Swedes.

An often repeated "fact" is that the municipality with the highest proportion of Swedish speakers in the world, Hammarland (96% as of 2004[update]), is located in Finland. Korsnäs has also held this title and is often cited as such. However, as there are no official statistics on the mother tongue of inhabitants of Sweden, this is hard or impossible to verify and is not to be considered a fact.

In the spoken vernacular, especially among young people in Finnish-dominated areas, Finnish loanwords as well as calques from Finnish are frequently incorporated into Finland Swedish. There are also some words in Finland Swedish that would be considered slightly archaic in Sweden. Some government and public service terms that have been created in recent centuries also differ. The same is true of other new words, notably loanwords from English.

A common misconception among many Swedes is that Finland Swedish is simply Swedish spoken with a Finnish accent, something that can be a considerable source of frustration to most native Swedish-speakers in Finland. Any language adopts features, especially pronunciation habits, from dominant languages it comes in touch with, but many of the traits of Finland Swedish exist also in monolingual areas and some are in fact preserved features of old Swedish, as with Scots in comparison to English, Afrikaans in comparison to Dutch, or Galician and Brazilian and African dialects in comparison to modern mainland European Portuguese.

The pronunciation of Finland Swedish by a Swedish-speaking Finn is naturally different from that of Finnish speakers pronouncing Swedish as a foreign language.

From the 16th century, Swedish was the main language of jurisdiction, administration, and higher education in Finland (which was then a part of Sweden), but the majority of the population in the Finnish inland spoke Finnish outside of these sectors of society, i.e. in normal, daily life. In 1809, when Finland was conquered by the Russian Empire and became an autonomous Grand Duchy, Swedish remained the only official language. In 1863, both Finnish and Swedish became official languages with equal status, and by the time of Finland's independence in 1917, after a fennicization campaign by the Fennoman movement, Finnish clearly dominated in government and society. See further: Finland's language strife.

Finland has since then been a bilingual country with a Swedish-speaking minority (5.5% of mainland Finland's population in 2006) living mostly in the coastal areas of southern, south-western, and western Finland. During the 20th century, the urbanization following the Industrial Revolution has led to large majorities of Finnish speakers in all major cities. The capital Helsinki (in Swedish Helsingfors) became predominantly Finnish speaking as recently as around 1900. A large and important part of the Swedish-speaking population nevertheless lives in the capital.

The autonomous island province of Åland is an exception, being monolingually Swedish speaking according to international treaties. It is a matter of definition whether the Swedish dialects spoken on Åland are to be considered a kind of Finland Swedish or not. Most Swedish-speaking Finns and linguists consider them to be closer to some of the dialects spoken in nearby parts of Sweden.

Swedish is one of the two national languages of the republic of Finland, the other being Finnish. These two languages have formally equal status in nearly all legislation. The other minority languages (such as Sami) are regulated separately.

Finland Swedish is regulated by the Institute for the Languages of Finland. Official Swedish is not supposed to be very different from Swedish as found in Sweden. There are however e.g. words regarded as archaic in Sweden, but commonly used in Finland, and terms that differ from their counterparts in Sweden, often because of slight differences in the related legislation.

Bilingualism of municipalities is regulated by the Language Act of 2003.[2] If the minority has increased into at least 3,000 persons or 8% of inhabitants, then the municipality must become bilingual. If the minority has fallen below 3,000 persons and 6% of inhabitants, then the municipality must become monolingual, unless it decides to keep its bilingual status. At present, only one such municipality has done so, namely Lohja (Lojo in Swedish). The status is reviewed once in a decade, and enacted by a government decree issued by the Finnish Council of State.

With the exception of the dialects spoken in Ostrobothnia along the west coast, close to the Gulf of Bothnia (example: the dialect spoken in Närpes), Finland Swedish is not particularly different from Central Swedish. The phoneme /ʉ/ is more centralized and pronounced like [ʉ], quite similar to how many American English speakers pronounce /u/ (as in moon). This should be compared to the Central Swedish [ʉ̟], which is very close to the short vowel [ʏ] and is more rounded.

The highly variable sj sound /ɧ/ varies between [ʂ] and [ɕ ~ ʃ] on the Finnish mainland, often close to sh in English shoe. In the Åland Islands its realization is similar to the velar (and often labialized) pronunciations of nearby parts of Sweden. The tj (or soft k) sound /ɕ/ of Central Swedish is affricated to [t͡ɕ] or [t͡ʃ] in all Finland Swedish dialects, close to ch in English chin. (Except for some, but not all,[3] Åland Swedish, where it is a simple fricative.[4])[5][clarification needed]

The tonal word accent, which distinguishes some minimal pairs in most dialects of Swedish and Norwegian, is not present in Finland Swedish (except around the parish of Snappertuna, west of Helsinki). The so-called "accent 2", used mainly in words with a two-syllable root, is not used at all; instead, "accent 1" is used in all words. Hence, Sweden Swedish minimal pairs like /ˈandɛn/ ("the duck") – with stress on only the first syllable – and /ˌandˈɛn/ ("the spirit") – with both syllables stressed – are both pronounced [ˈandɛn] in Finland.

Finland Swedish mostly has the same vocabulary as Swedish in Sweden. There is a conscious effort to adopt neologisms from Sweden, to avoid differences. Nevertheless there are differences. They are generally in two categories: Old Swedish forms vis-a-vis loanwords and calques from Finnish or independently borrowed from other languages (nowadays mostly English). There are also some terms differing because of differing legislation.