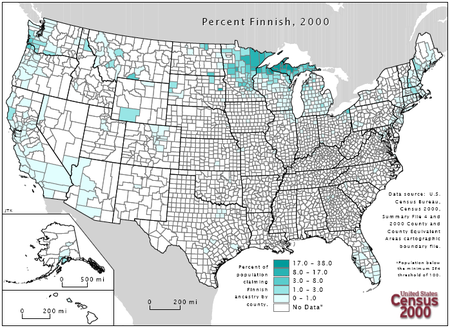 A map showing concentrations of Finnish American ethnicity in the United States.

Finnish Americans comprise Americans with ancestral roots from Finland or Finnish people who emigrated to and reside in the United States. Finnish American population numbers about 700,000.

Some Finns, like the ancestors of John Morton, came to the Swedish colony of New Sweden, that existed in mid-17th century.

Finns first started coming to the United States in large numbers in the late 19th century, and continued until the mid 20th century. However, there were some Finns in the United States beforehand; in particular, they were instrumental in the development of the New Sweden colony on the Delaware River, later absorbed into New Netherland. Many townships were established by Finnish Americans, including Herman, located in Baraga County, Michigan. The town is named for Herman Keranen, of Puolanka, Finland.

A significant number of Finnish immigrants also settled in northern Minnesota, especially in the Arrowhead Region, along with portions of Aitkin, Crow Wing, and Carlton counties, often working in the region's iron mines. A number of the Finns fleeing the Russification efforts also emigrated to many of the mill towns of New England where they became known for their woodworking skills.[citation needed]

The first immigrants to North America arrived to the New Sweden colony by the lower Delaware River in 1640. Finland was an integrated part of the Kingdom of Sweden at the time, and a Swedish colony in the New World was bound to include subjects from Finland as well. In two years' time, the number of Finns in the settlement had grown to fifty, and was increasing. New Sweden changed hands to Dutch control in 1655, but many Finns had already entered, and the Finnish community, while small, was growing.

Among the Finnish settlers of New Sweden was Martti Marttinen, who came to North America in 1654 and changed his name to Morton. John Morton, the politician who signed the U.S. Declaration of Independence on behalf of Pennsylvania in 1776, was his great-grandson.

Migration to North America from Finland continued throughout the 17th and 18th centuries, but it was very sporadic in nature and only a few individuals and groups dared make the move. This was largely due to the long distance between Europe and America, and the difficulties associated with crossing it. However, as the Industrial Revolution began with the turn of the 19th century, bringing with it such technological innovations as railways and steam ships, these obstacles slowly began to disappear.

While the rest of Europe was industrializing, Finland, by now a Grand Duchy of the Russian Empire, was to a great extent excluded from the revolutionary process. The society was largely agrarian, and unemployment was rising, resultant from population growth and the fact that there was now little land left to cultivate in the country. America, on the other hand, possessed abundant natural resources but lacked a work force.

Rural life in Finland during the 1860s seemed doomed to remain laborious, stunted, and forever at the mercy of unpredictable weather. In 1867, a severe crop failure in Finland drove masses of Finns, especially from rural Ostrobothnia, into migrating to Norway, from where they later moved to the United States and Canada.[citation needed]

The Laestadian Finns longed for a rural way of life and religious toleration which they believed they would find in America. So a group of Laestadian preachers and followers immigrated to the Upper Peninsula of Michigan bringing their beloved sermons. In 1873 the Finnish Laestadians started their own congregation at Calumet, Michigan. By 1906 the Laestadian movement in America resulted in 68 churches and a communicant body of over 8,000. Today the Finnish Evangelical Lutheran Church of America remains in Calumet, Michigan.[citation needed]

The years between 1870 and 1930 are sometimes referred as the Great "Migration" of Finns into North America. In the 1870s, there were only 3,000 migrants from Finland, but this figure was rapidly growing. New migrants often sent letters home, describing their life in the New World, and this encouraged more and more people to leave and try their luck in America. Rumors began of the acres of land that could be cleared into vast productive fields and the opportunity to earn "a barrel of American dollars" in mines, factories, and railroads.

There were also professional recruiters, or "agents," employed by mining and shipping companies, who encouraged Finns to move to the United States. This activity was frowned upon by the authorities of the Grand Duchy, and was mostly done in secret. It was eventually brought to an end in the late 1880s by legislation in the U.S., but the decade still saw a 12-fold increase in the number of Finnish migrants compared to the previous decade, as 36,000 Finns left their home country for North America.

The movement was strengthened even further in 1899, as the Russian government started an aggressive, coordinated campaign for the Russification of Finland. Many Finns chose to escape the repression by migrating into the New World, and, during the 1900s, there were 150,000 new migrants.

Most Finns who left for America came from the impoverished rural regions of Ostrobothnia. Other prominent points of departure were Northern Savonia and the Torne Valley. Many of the emigrants left by ship from the port town of Hanko. 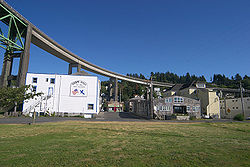 In the years surrounding the turn of the 20th Century, settlement was focused around three specific regions:

The immigration of Finns gave birth to a strong Finnish American culture, especially in cities such as Duluth and Detroit, and many villages were named after places in Finland (such as Savo, South Dakota, and Oulu, Wisconsin).

The Finnish exodus took place after most of the available farmland in the U.S. was already taken and Canada's was largely still up for grabs. While many of them did pursue farming, many Finnish immigrants also received employment in mining, construction, and the forest industry, while the women usually worked as maids. In the case of the Finnish-American enclave in the Finger Lakes region south of Ithaca, New York early in the 20th century, Finns left urban jobs in order to acquire farms that had been played out by previous owners.[3]

The migration continued well into the 20th century, until the U.S. authorities set up a quota of 529 Finnish immigrants per year in 1929. This reduced the flow somewhat, and as conditions in Finland improved, the flow effectively died down by the mid-20th century.[citation needed]

Most Finnish migrants had planned to stay only a few years in North America, and then to return to their native land once they had become rich.[citation needed] However, only about twenty percent of the migrants returned to Finland. Those who did manage to import new ideas and technologies into Finland and put them into use there.[citation needed]

Approximately ten thousand Finns returned from the New World, not to Finland but to the Soviet Union, in the 1920s and the 1930s to "build socialism" in the Karelian ASSR. This took place mainly for ideological reasons, and was strongly supported by the political elite of the USSR. However, as the political climate changed and ethnic republics were seen as a threat to the future of the USSR, many of these immigrants were killed in the so-called Stalin's Purges in 1935-1938.[4]

There is a website of deceased people in the Sandarmokh mass gravesite in the Republic of Karelia, where one can read entries like "Mäki, Valter Valterovits, s.1907, Minnesota, USA; suomalainen; USA:sta 1931; kirvesmies; Uhtua, Kalevalan piiri; ammuttu 15.05.1938." - Mäki, Walter, son of Walter. Born in 1907, Minnesota USA; Finn; immigrated from USA in 1931; lumberjack; resident of Uhtua, Kaleva district; shot May 15, 1938".[citation needed]

Today, the greatest concentration of Finnish Americans is in Michigan Upper Peninsula, where they form 16% of the population, and are the largest ancestral group in the peninsula's western counties.[5] “Finland Calling”, a weekly Finnish cultural television program hosted by Carl Pellonpaa, was broadcast on WLUC-TV in Michigan’s Upper Peninsula. In March 2015 the program's final episode aired, ending 53 years of weekly broadcasts.[6] Stanton Township, Michigan is the place in the U.S. with the largest proportion of people with Finnish ancestry, at 47%.[7]

An early Ethnic Finn notable in American history was John Morton, signer of the Declaration of Independence. The original name of the family was Marttinen, of which Morton is an anglicized version. The Marttinen/Morton family came originally from Rautalampi municipality in the region of Northern Savonia, a province of Eastern Finland.

Architect and product designer Eero Saarinen emigrated to United States in 1923 when he was thirteen years of age and grew up in Michigan. His father was architect Eliel Saarinen. He studied architecture at Yale University and graduated in 1934. After touring Europe and Africa for couple of years he returned to the States and became a citizen in 1940. During the Second World War Saarinen worked for Office of Strategic Services (OSS) which later became the Central Intelligence Agency (CIA). Saarinen is famous for his furniture and architectural designs. His designs include the Jefferson National Expansion Memorial (Gateway Arch) in St. Louis, Missouri, the General Motors Technical Center in Warren, Michigan, the TWA Flight Center at John F. Kennedy International Airport, and the main terminal of Dulles International Airport near Washington, D.C..

FinnFest USA is an annual festival is held to celebrate Finnish heritage and culture in the United States. Organized by a non-profit organization of the same name, FinnFest USA has been held in a different location each year since 1983, often incorporating regional cultural elements of the local site into the year's event. To date there have also been three FinnGrandFests, a collaboration between Finnish-Americans and Finnish-Canadians: 2000 (Toronto, Ontario), 2005 (Marquette, Michigan) and 2010 (Sault Ste. Marie, Ontario) .

Finnish American culture is also celebrated at Finlandia University in Hancock, Michigan, formerly Suomi College, which has been the only Finnish American institution of higher learning in the United States since the closing of Work People's College in Duluth, Minnesota in 1941. Finlandia was established by the Finnish Evangelical Lutheran Church of America and is now affiliated with the Evangelical Lutheran Church in America.[citation needed]