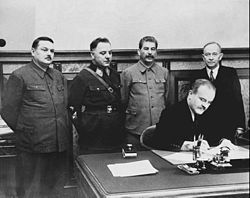 The Finnish Democratic Republic (Finnish: Suomen kansanvaltainen tasavalta, also Finnish: Suomen kansantasavalta, Swedish: Demokratiska Republiken Finland) was a short-lived puppet government created and recognised only by the Soviet Union. Headed by Finnish politician Otto Ville Kuusinen, the Finnish Democratic Republic was Joseph Stalin's planned means to rule Finland.[1][2][3][4] It nominally operated in the parts of Finnish Karelia that were occupied by the Soviet Union during the Winter War.

The Soviet Union argued that it was the only rightful government for all of Finland that was capable of ending the Winter War and restoring peace; however, before the end of the war, the Soviets gave up this interpretation to make peace with the preexisting government of Finland, which was still recognized by the rest of the world.

The Finnish Democratic Republic was established on 1 December 1939 in the Finnish border town of Terijoki (now Zelenogorsk, Russia). During its tenure Otto Ville Kuusinen was prime minister and head of government. The cabinet was made up of Soviet citizens and leftist Finns who had fled to Soviet Russia after the Finnish Civil War.[5] A declaration delivered via TASS on behalf of the Finnish Democratic Republic stated, "The People's Government in its present composition regards itself as a provisional government. Immediately upon arrival in Helsinki, capital of the country, it will be reorganised and its composition enlarged by the inclusion of representatives of the various parties and groups participating in the people's front of toilers. The final composition of the People's Government, its powers and actions, are to be sanctioned by a Diet elected on the basis of universal equal direct suffrage by secret ballot."[6] Soviet foreign minister Vyacheslav Molotov spoke to the German ambassador to the Soviet Union on November 30—a day before the proclamation of the Finnish Democratic Republic—saying, "This government will not be Soviet but a democratic republic. Nobody will set up soviets there, but we hope that it will be a government that we can reach agreement with on safeguarding the security of Leningrad."[7]

Relations with the Soviet Union

The Soviet government entered into diplomatic relations with the "people's government". On the first day of its existence, the new regime agreed to lease the Hanko Peninsula; to cede a slice of territory on the Karelian Isthmus; and to sell an island in the Gulf of Finland, along with sections of the Kalastajasaarento near the Arctic Ocean to the Soviet Union.[5]

Kuusinen and Molotov signed a mutual assistance agreement and a secret protocol on 2 December 1939 in Moscow. The content of the agreement was very similar to what the Soviet foreign ministry had planned earlier in October 1939, though it never was presented to the Finnish government. According to the new agreement, the Soviet Union would cede a much larger area, Eastern Karelia, except for the Murmansk railroad, in exchange for the same territories that the Soviets had demanded in earlier negotiations from the Republic of Finland.[8]

An earlier draft of the Moscow agreement was signed ten days earlier at Petrozavodsk by Andrei Zhdanov for the USSR and Kuusinen for the Republic. The Molotov–Kuusinen agreement mentioned leasing the Hanko Peninsula, and determining the number of troops to be appointed in a separate agreement. Before the 1990s, historians could only speculate about its existence and content. In 1997, during a joint Finnish-Russian project, Russian professor Oleg Rzesevski discovered the protocol in the Moscow Kremlin. The content is quite similar to protocols the Soviet Union signed with Estonia, Latvia and Lithuania in September–October 1939.[9]

Reaction in Finland and abroad

The Finnish Democratic Republic failed to gain support among Finnish workers as the Soviet Union had hoped. Instead, in the face of the invasion, Finnish society became strongly united in what is called the "Spirit of the Winter War". The Democratic Republic also failed to gain any international recognition aside from the Soviet Union itself,[5] although a number of prominent left-wing activists and writers such as Jawaharlal Nehru, George Bernard Shaw, Martin Andersen Nexø and John Steinbeck voiced their support for the government.[10] In Nazi Germany, state newspapers gave their support for the People's Republic because of the Molotov–Ribbentrop Pact.[10]

Joseph Stalin was well aware of the domestic political situation in Finland based on Soviet intelligence information, and thus did not anticipate that the establishment of the People's Republic would cause any revolutionary action or popular uprisings against the existing Finnish Government.[11]

On 12 March 1940, the Finnish Democratic Republic was merged with the Karelian ASSR within the RSFSR to form the Karelo-Finnish SSR, a Soviet republic in its own right, after Finland had ceded the areas to the Soviet Union in the Moscow Peace Treaty.