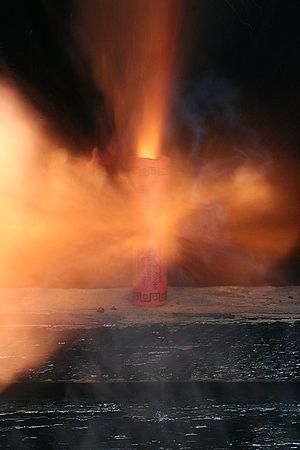 A firecracker (cracker, noise maker, banger, or bunger[citation needed]) is a small explosive device primarily designed to produce a large amount of noise, especially in the form of a loud bang; any visual effect is incidental to this goal. They have fuses, and are wrapped in a heavy paper casing to contain the explosive compound. Firecrackers, along with fireworks, originated in China. 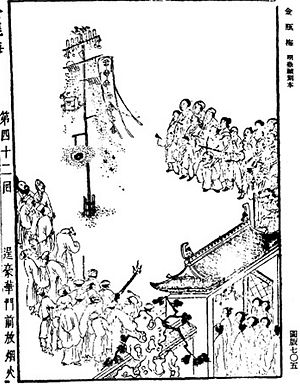 An illustration of a fireworks display from the 1628–1643 edition of the Ming Dynasty novel Jin Ping Mei.[1]

The predecessor of the firecracker was a type of heated bamboo, used as early as 200 BC, that exploded when heated continuously. The Chinese name for firecrackers, baozhu, literally means "exploding bamboo."[2] After the invention of gunpowder, gunpowder firecrackers had a shape that resembled bamboo and produced a similar sound, so the name "exploding bamboo" was retained.[3] In traditional Chinese culture, firecrackers were used to scare off evil spirits.[3]

Firecrackers are generally made of cardboard or plastic, with flash powder or black powder as the propellant. This is not always the case, however. Anything from match heads to lighter fluid have been used successfully in making firecrackers. The key to loud firecrackers, however, although in part lying in the propellant substance, is pressure. The entire firecracker must be very tightly packed in order for it to work best. Flash powder, however, does not need to be packed tightly, and should not be.

How firecrackers were made 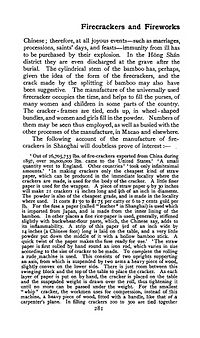 James Dyer Ball, in his book Things Chinese, has a detailed description about the process and material used for making firecrackers at the end of the 19th century. At that time, firecrackers were made by female and child workers, using straw paper to make the body of the firecracker, while the fuse was made of bamboo paper imported from Japan, then stiffened with buckwheat paste. The bamboo paper was cut into strips of 14 inches (360 mm) long and 1⁄3 inch (8.5 mm) wide, laid on a table; a string of gunpowder was placed at the center with a hollow tube, then twisted up to make a piece of fuse. The firecracker tubes were made from pieces of straw paper wrapped around iron rods of various diameters and then tightened with a special tool. 200 to 300 firecrackers were tied up in a bunch, then red clay was spread at the bottom of the bunch and forced into each end of the firecracker with a punch; gunpowder was poured in, then the other end was sealed with an awl by turning the tube inward, and a fuse inserted.[4] 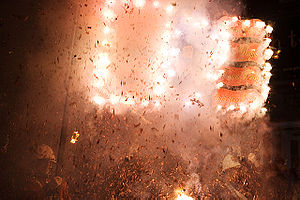 Firecrackers are commonly used in celebration of holidays or festivals, such as Halloween, Independence Day (also known as the Fourth of July) in the United States of America, Diwali in India, Tihar in Nepal, Day of Ashura in Morocco, Guy Fawkes Night or Bonfire Night in the United Kingdom, Halloween in Ireland, Bastille Day in France, Spanish Fallas, in almost every cultural festival of Sri Lanka (e.g. Sri Lankan New Year), New Year's Eve and New Year's Day, Purim in Israel, and in the celebration of Chinese New Year by Chinese communities around the world.

In Wales the slang term for a firecracker, typically used on Guy Fawkes Night, is a "jacky-jumper".[5]

The use of firecrackers, although a traditional part of celebration, has over the years led to many injuries and deaths. There have been incidents every year of users being blinded, losing body parts, or suffering other injuries, especially during festivities that customarily involve firecrackers such as Chinese New Year season. Hence, many governments and authorities have enacted laws completely banning the sale or use of firecrackers, or banning the use of firecrackers in the street, primarily because of safety or environmental These rules also require a permit from the local government, as well as any relevant local bodies such as maritime or aviation authorities (as relevant to the types of fireworks being used) and hospitals, schools, etc. within a certain range. 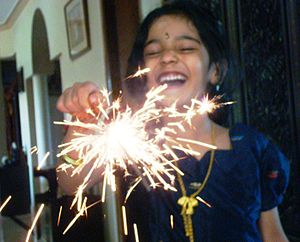 Diwali fireworks is a family event in many parts of India. People light up fireworks near their homes and in streets. Additionally, cities and communities have community fireworks. Above: Phuljhari, sparklers that are popular with some children on Diwali nights.[11]

Early (pre-1920s) Chinese firecrackers (also known as "Mandarin firecrackers") were typically 1⁄2 to 2 inches (13 to 51 mm) long, and approximately 1⁄4 inch (6.4 mm) in diameter, and were charged with black powder. Mandarin crackers produced a less loud, duller thud compared to modern flash-light crackers (which utilize a different explosive known as flash powder). Mandarin crackers produced a dimmer, less brilliant flash when they exploded also. Individual Mandarin crackers were most often braided into "strings" of varying lengths, which, when ignited, exploded in rapid sequence. Generally, the strings (sometimes containing as many as several thousand crackers) would be hung from an overhead line before ignition. Most Mandarin crackers were colored all red and did not generally have designs or logos decorating their exterior surface (or "shell wraps"). Occasionally a few yellow and green Mandarin crackers were created and would be braided into the predominantly all-red strings to symbolize the emperor and the ruling class, while the numerous red crackers symbolized the common man.

Once flash powder, which produces a significantly sharper and brighter bang, replaced black powder as a firecracker's explosive charge (circa 1924), manufacturers began competing to gain loyalty of typical consumers (that is, mainly boys eight to 16 years old). Thousands of brands were created during the flash-light cracker's heyday from the 1920s through the early 1970s. Only a small percentage of brands lasted more than a year or two. Collectors now seek the various labels from the era.[22]

Until the mid-1980s, firecracker production was low-tech. They were handmade, beginning with rolling tubes. Once the firecracker tubes were rolled by hand (commonly from newspaper) and labelled, and then filled with powder, their ends were crimped and fuses inserted, all by hand. These finished firecrackers were usually braided into "strings" and sold in packs which came in many sizes, from the very small ("penny packs" containing as few as four to six firecrackers) to the most common size packs (containing 16 and 20 crackers per pack), to larger packs (containing 24, 30, 32, 40, 50, 60, 72, 90, 100, and 120 firecrackers), to huge "belts" and "rolls" (packages containing strings of several hundred to several thousand crackers—Phantom Fireworks sells rolls as large as 16,000 firecrackers[23]). Firecracker packages were wrapped in colourful and translucent glassine paper, as well as clear cellophane, with glassine the most popular.

The final operation involved applying a branded label on each pack, then bundling finished packs into wholesale lots called "bricks" which contained an average of 80 packs each (varying according to the size of the packs being bundled; for example, packs of 32 crackers might have 40 packs per brick, compared to packs of 16 or 20 with 80 packs per brick).