The Firelands or Sufferers' Lands tract was located at the western end of the Connecticut Western Reserve in what is now the U.S. state of Ohio. It took the name "Fire Lands" because the resale of this land was intended as financial restitution for residents of the Connecticut towns of Danbury, Fairfield, Greenwich, Groton, New Haven, New London, Norwalk, and Ridgefield. Their homes had been burned in 1779 and 1781 by British forces during the American Revolutionary War. "Fire Lands" was later spelled as one word, 'Firelands'. 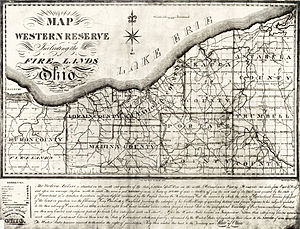 Map of the Western Reserve in 1826: the Firelands are on the west end (left)

In 1792 the Connecticut legislature set aside 500,000 acres (2,000 km²), at the western end of the "Western Reserve" for the Connecticut "Sufferers". The area consisted of nearly all of the present-day Huron and Erie counties, as well as Danbury Township (Marblehead Peninsula) and much of Catawba Island Township now in Ottawa County; and Ruggles Township now in Ashland County.

Almost none of the original "Sufferers" ever settled in the Firelands, because land speculators purchased all of the original claims for re-sale. On April 15, 1803, the new proprietors formed a corporation to manage the lands to which they were entitled in the newly formed state of Ohio.[1] The land was later divided into 30 five-mile (8 km) square survey townships, which were further subdivided into 120 quarters, each containing 4,000 acres (16 km2). (Note: Although the standard for U.S. survey townships in the Northwest Territory was six miles (approx. 10 km) square at that time, the older standard for survey townships in the Western Reserve was employed.) A drawing was held to determine which land each individual share-holder would receive.

Some of the original townships in the Firelands took their names from locations in Connecticut, and some from the land-speculators who had purchased them. (In some cases the pioneer settlers took a dislike to these speculators, and so changed their township names.) Later, after the War of 1812, when villages began to be established here, many of these villages were also named for Connecticut villages.

In 1811, Huron County encompassed the entire Firelands (and also included a portion of later Lorain County). Until 1837, all of the "Fire Lands" would lie within — and therefore co-exist with — 'Huron County'.

Modern sign-posts erected within this area have the "established 1792" designation date, as mentioned above. The lands were physically surveyed from 1806-1808, and very slowly settled after 1808. No villages had developed within the 'Fire Lands' until about the end of the War of 1812.[2] 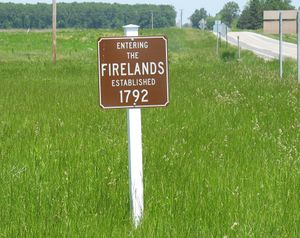