FirstGroup[2] is a British transport group, registered and operating in the United Kingdom. The company also operates transport services in Ireland, Canada and the United States. It is listed on the London Stock Exchange and is a constituent of the FTSE 250 Index.[3] 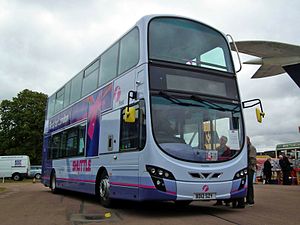 FirstGroup originated from the deregulation of bus services in the United Kingdom in 1986, whereby private companies purchased nationalised and municipal bus operators.[4]

In September 1986 the Somerset based services of the Bristol Omnibus Company that were rebranded in 1985 as Badgerline were purchased by a management buyout. As Badgerline Group, it expanded through acquisition purchasing 12 other formerly nationalised bus companies in England and Wales. Badgerline Group became a public limited company in November 1993.

In April 1995 FirstBus was formed through the merger of the Badgerline and GRT Bus Groups, with fleets in England, Wales and Scotland. Aberdeen was selected as the headquarters.[6]

At the time of the merger, FirstBus had 5,600 buses, 4,000 of which came from Badgerline.[7] Badgerline's Trevor Smallwood became chairman of FirstBus, while GRT head Moir Lockhead became deputy chairman and chief executive.[7]

FirstBus continued the policy of growth by acquisition acquiring former council owned operations and companies formerly owned by English, Welsh and Scottish nationalised operators. FirstBus went on to acquire larger urban metropolitan operators by taking advantage of the privatisation of the PTE bus operations and the privatisation of London bus services. FirstBus acquired GM Buses North in Manchester and Strathclyde Buses in Glasgow in 1996, Mainline in South Yorkshire and CentreWest in London in 1997, and Capital Citybus in London in 1998.[7] 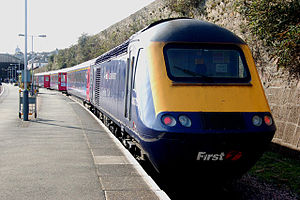 In May 2000 FirstGroup began operating the London Tramlink concession under contract to Transport for London.[14]

In August 2003 FirstGroup purchased GB Railways which owned Anglia Railways and GB Railfreight and held 80% of the shares in Hull Trains.[15] Having not been shortlisted for the Greater Anglia Rail Franchise, this gave FirstGroup another chance to bid. However it was unsuccessful and the franchise was awarded to National Express from April 2004 including the services operated by First Great Eastern.

In November 2003 FirstGroup purchased a 90% shareholding in Irish coach operator Aircoach.[16] The remaining 10% was purchased in 2005.

In February 2004 FirstGroup's joint venture with Keolis commenced operating the First TransPennine Express rail franchise, FirstGroup having a 55% shareholding.[17][18] In April 2004 FirstGroup commenced operating the First Great Western Link franchise[19] and in October 2004 the First ScotRail franchise.[20] In December 2004 the remainder of First North Western passed to Northern Rail, some services having already been transferred to Arriva Trains Wales and FirstTranspennine Express.

In April 2006 FirstGroup commenced operating the First Capital Connect franchise[21] and a renewed First Great Western franchise that had been expanded to include the Thames Trains and Wessex Trains franchises.[22][23] 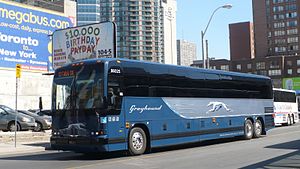 In February 2007 FirstGroup agreed to buy the US-based firm Laidlaw, an operator of inter-city coaches and yellow school buses across North America, for £1.9 billion (US$3.7 billion). This also gave it a controlling stake in Greyhound Lines, the largest bus operator in North America. The Greyhound name and the names of Canadian subsidiaries of Greyhound Canada were retained, and all other Laidlaw-owned services in the United States and Canada were rebranded under the First or Greyhound names, except for Voyageur Colonial and Grey Goose in Canada.[24]

In May 2007 FirstGroup purchased some bus services in the Rhine-Neckar region of Germany.

In January 2009 DSBFirst, FirstGroup's joint venture with Danish State Railways commenced operating the Oresundtrain rail franchise from Helsingør and Nivå in Denmark along the Kystbanen line and over the Øresund Bridge to Malmö, Växjö, Kalmar, Karlskrona and Gothenburg in Sweden. FirstGroup had a 25% shareholding in the Danish business and 20% in the Swedish business.[25] By March 2011 this was 30%.[26]

In June 2010 FirstGroup sold its railfreight business First GBRf to the Eurotunnel Group for £31 million,[28][29] ending the group's involvement in rail freight transport.[30]

In September 2010 former London Underground managing director Tim O'Toole, already a board member since May 2009 and Chief Operating Officer and Deputy Chief Executive since June 2010, was announced as the successor to retiring group Chief Executive Officer Moir Lockhead with effect from 31 March 2011.[31][32]

In December 2011 DSBFirst ceased operating the Swedish part of the operation after difficulties encountered by Danish State Railways over cross subsidies.[34][35][36]

In July 2012 FirstGroup provided bus and coach services for the London 2012 Olympic Games. This involved the provision of venue shuttle and park and ride services, services connecting peripheral park and ride sites on the M25 with the Olympic Park and Ebbsfleet, and a nationwide network of express coaches to the Olympic Park and the Weymouth and Portland sailing venue. The services required around 900 vehicles in total, although some were sub-contracted.[37]

In June 2013 most of the First London bus operations were sold to Go-Ahead London, Metroline and Tower Transit.[38]

In April 2015 FirstGroup lost the ScotRail franchise, which is now run by Abellio. 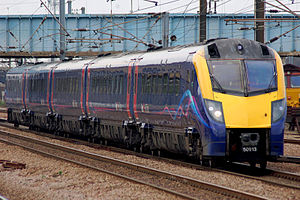 In North America, FirstGroup has several divisions: First Student, which runs school bus routes;[40] First Transit, which holds many city and county public transport contracts;[41] and First Vehicle Services, which maintains vehicles for many corporations, organisations and local governments, including the other First divisions and Greyhound lines.[42] Canadian operations are provided through its First Canada subsidiary, which operates school buses and fulfills public transport contracts.

FirstGroup owns and operates the Aircoach service in Dublin,[43] linking Dublin Airport with the city centre, the south side of Dublin, Greystones and Bray as well as long-distance express services runs to Cork and Belfast. Aircoach also operates car park shuttles at Dublin Airport. Until 2009 Aircoach did not carry corporate branding. Buses introduced since January 2009 on Aircoach carry a FirstGroup logo alongside the Aircoach logo. 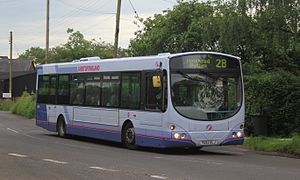 First bus in corporate livery in Bishops Lydeard in 2014

FirstGroup has always had a consistent brand and uses the First brand for most of its operations. FirstBus began to apply a standard corporate typeface to its fleet names in the late 1990s, introducing the stylised f logo depicting a road. A corporate white, pink and blue livery was introduced, nicknamed "Barbie", to new buses, while further bus company acquisitions continued. Inherited bus fleets were initially left in their original colours with First fleet names, with the intention that the Barbie scheme would stand for a set service quality. Later older buses received a modified "Barbie 2" livery. 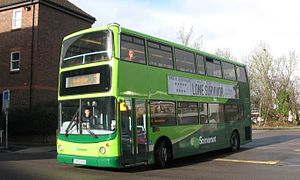 As part of its corporate branding, First subsequently removed all local branding for its bus services, buses simply carried the 'First' brand, although each company still operated independently. In 2012, the group began to introduce a new purple, white and lilac livery to its bus fleets, which also reinstated local branding.[44] In January 2014, the company rebranded its First Somerset & Avon operations in Bridgwater and Taunton as The Buses of Somerset, using a two-tone green livery.[45][46]

London Tramlink operations are painted in white, green and blue as per Transport for London requirements. In Scotland, First ScotRail operated with a blue livery with white saltire markings on the carriage ends, as mandated by the Scottish Government's transport agency Transport Scotland.[48]

Similarly, in North America, all owned and operated services are operated under the First or Greyhound brands except in the Canadian provinces of Quebec and Manitoba for regulatory reasons, and vehicles operated under contract to public agencies, which carry the branding of the agency that owns the particular bus. All American subsidiaries of Greyhound Lines are now operated under the Greyhound name.[49] Greyhound UK services in the United Kingdom are painted in the same navy blue and grey livery introduced to the American Greyhound fleet in 2009. 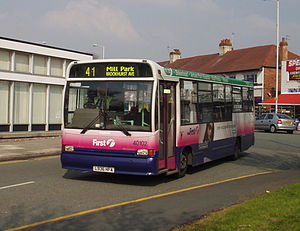 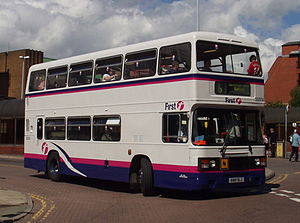 Leyland Olympian in Chester in August 2007 in the modified Barbie livery
See also: Bus transport in the United Kingdom 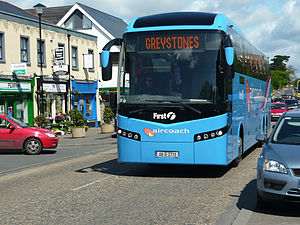 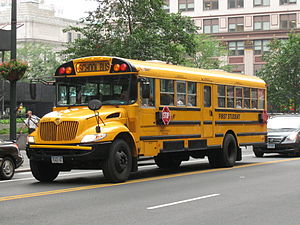 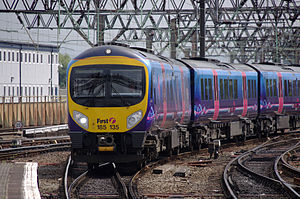 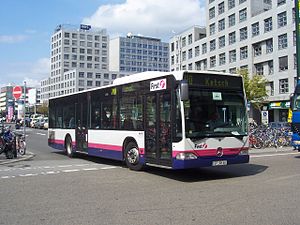 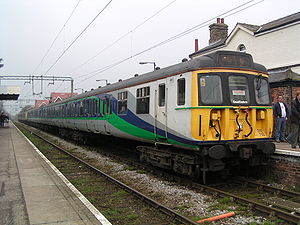