Its primary mission is the air defense of the Contiguous United States (CONUS), United States Virgin Islands and Puerto Rico. Its mission lineage can be traced to the Air Defense Command, one of the original USAAF major commands formed in 1946.

One of the four original pre-World War II numbered air forces during the existence of the United States Army Air Corps, 1 AF was activated on 18 December 1940, at Mitchel Field, Long Island, New York with a mission of air defense of the Northeastern United States and Great Lakes regions. During the war, its primary mission became the organization and training of combat units prior to their deployment to the overseas combat air forces.

The command has sole responsibility for ensuring the air sovereignty and air defense of the Contiguous United States (CONUS), United States Virgin Islands and Puerto Rico. As the CONUS Region (CONR) for NORAD, the bi-national North American Aerospace Defense Command, CONR provides air defense in the form of airspace surveillance and airspace control.

The command is unique in both its mission and composition. With the transfer of responsibility for continental air defense from the active duty component of the Air Force to the Air National Guard, 1 AF became the first numbered air force to be made up primarily of citizen airmen.

First Air Force has been an Air Combat Command organization since 1 June 1992. Its subordinate units are located throughout the continental United States. 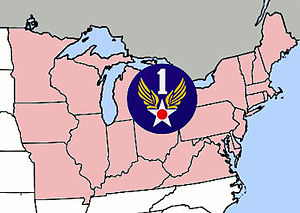 During the initial months after the Pearl Harbor Attack, First Air Force organized what would eventually become the core of the Army Air Forces Antisubmarine Command (AAFSC), obtaining most of its forces from I Bomber Command to combat the German U-Boat threat along the Atlantic Coast. AAFSC would eventually expand that mission to the Gulf of Mexico and Caribbean until the antisubmarine mission was taken over completely by the Navy in mid-1943.

Beginning in May 1942, the mission of First Air Force became operational training of units and crews, and the replacement training of individuals for bombardment, fighter, and reconnaissance operations. It received graduates of Army Air Forces Training Command flight schools; navigator training; flexible gunnery schools and various technical schools, organized them into newly activated combat groups and squadrons, and provided operational unit training (OTU) and replacement training (RTU) to prepare groups and replacements for deployment overseas to combat theaters. The First Air Force became predominantly a fighter OTU and RTU organization. Most P-47 Thunderbolt fighter groups were trained by I Fighter Command, along with P-39/P-63 Airacobra groups; C-47 Skytrain and later C-46 Commando groups by I Troop Carrier Command. By 1944, most of the Operational Training of groups ended, with the command concentrating on the training of individual replacements using Army Air Force Base Units (AAFBU) as training organizations at the airfields controlled by First Air Force.

Air Defense Wings were also organized for the major metropolitan areas along the northeast coast, using training units attached to the Wings. By 1944 the likelihood of an air attack along the eastern seaboard was remote, and these air defense wings were reduced to paper units.

By 1944, the vast majority of the USAAF was engaged in combat operations in various parts of the world, such as the Eighth Air Force in Europe and the Twentieth Air Force in the Pacific. The training units located within the United States (known as the Zone of the Interior, or "ZI".) under First, Second, Third and Fourth Air Force were all were placed under the unified command of the Continental Air Forces (CAF) on 13 December 1944, with the Numbered Air Forces becoming subordinate commands of CAF.

In March 1946, USAAF Chief General Carl Spaatz had undertaken a major re-organization of the postwar USAAF that had included the establishment of Major Commands (MAJCOM), who would report directly to HQ United States Army Air Forces. Continental Air Forces was inactivated, and First Air Force was assigned to the postwar Air Defense Command in March 1946 and subsequently to Continental Air Command (ConAC) in December 1948 being primarily concerned with air defense.

The command was originally assigned the region of the New England states, along with New York and New Jersey. With the inactivation of the ADC Eleventh Air Force on 1 July 1948 due to budget restrictions, command's region of responsibility was increased to include the upper Midwest states of Michigan and Ohio, along with the Mid-Atlantic region south to the North Carolina/Virginia Border.

In 1949 Air National Guard and Air Force Reserve units were placed under First Air Force command, with its active-duty units being reassigned to Eastern Air Defense Force (EADF) or to the 30th, 32d or 26th Air Divisions.

The command was inactivated on 23 June 1958 for budgetary reasons, its assigned units being reorganized under ConAC.

First Air Force was reactivated at Stewart Air Force Base, Newburgh, N.Y., on 20 January 1966 due to the inactivation of the ADC Air Defense Sectors. First Air Force assumed responsibility for the ADC 21st, 33d, 34th, 35th, and 36th Air Divisions, primarily located in the northeast and upper Midwest regions of the United States. It also was responsible for the air defense of Greenland, Iceland and parts of Canada. By July 1968, First Air Force had again assumed total responsibility for the air defense of the eastern seaboard, just as it had during World War II.

On 16 January 1968 Air Defense Command was re-designated Aerospace Defense Command (ADCOM) as part of a restructuring of USAF air defense forces. First Air Force's second period of service was short lived, however, and the command was again inactivated as the result of a major ADCOM reorganization on 31 December 1969 of the First, Fourth, Tenth Air Forces and several Air Divisions. This reorganization was the result of the need to eliminate intermediate levels of command in ADCOM driven by budget reductions and a perceived lessening of the need for continental air defense against attacking Soviet aircraft.

ADCOM reassigned the units under the inactivated First Air Force were reassigned primarily to the 20th, 21st or 23d Air Divisions.

As part of realignment of military assets. ADCOM was reorganized on 1 October 1979. The atmospheric defense resources (interceptors and warning radars) of ADCOM were reassigned to Tactical Air Command (TAC). With this move many Air National Guard units that had an air defense mission also came under the control of TAC, which established a component called Air Defense, Tactical Air Command (ADTAC), at the level of a numbered air force.

On 6 December 1985 HQ USAF reactivated First Air Force at Langley Air Force Base, Virginia, and assigned it to Tactical Air Command (TAC), replacing ADTAC. First Air Force was given the mission to provide, train and equip combat ready air defence forces for the air defense of the North American continent.

Upon its reactivation, First Air Force was composed of units of the active Air Force and the Air National Guard. Because of its unique mission and its binational responsibilities, First Air Force works closely with the Canadian Forces. Canadian personnel are stationed at First Air Force Headquarters at Tyndall Air Force Base Florida, and at the various regional air defense sectors located throughout the United States.

Activation of the Continental NORAD Region on 1 October 1986, resulted in a new structure for North American Aerospace Defense Command (NORAD).[2] The continental U.S. region, along with Alaskan and Canadian regions provided the command and operational system for North American air defense.

The Air Defense Sectors were transferred by the Air Force to the National Guard Bureau and allotted to the Air National Guard on 1 October 1990. They were operationally gained by First Air Force, Tactical Air Command.

In the years since its third activation, more of the responsibility for the defense of American air sovereignty has shifted to the Air National Guard. Also, reorganization of the command structure of the U.S. Air Force saw the assignment of air defense to Tactical Air Command and later, its successor, Air Combat Command.

As the Cold War began to wind down and budgetary constraints became realities, more and more of the missions previously carried out by active duty forces began to be transferred into the reserve components. By the 1990s, 90 percent of the air defense mission was being handled by the Air National Guard.