From Infogalactic: the planetary knowledge core
(Redirected from First Battle of Kulm)
Jump to: navigation, search

The Battle of Kulm was a battle near the town Kulm (Chlumec) and the village Přestanov in northern Bohemia. It was fought on 29–30 August 1813, during the War of the Sixth Coalition. 32,000 French troops under Dominique Vandamme attacked an army of about 50-60,000 Austrians, Russians and Prussians under Alexander Ostermann-Tolstoy, but were defeated with heavy losses on both sides. 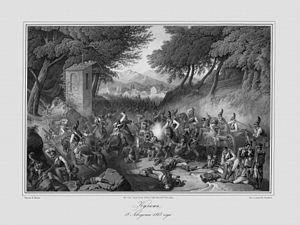 Charge of the cuirassiers at Kulm

On 29 August, Vandamme, with 34,000 soldiers and 84 guns at his disposal, attacked Russian formations forming a rearguard for the retreating Coalition army, at 16,000 strong, under the command of Russian general Ostermann-Tolstoy. The situation was very dangerous for the allies; if Vandamme won the battle, the French would take the passes in the mountain, and the retreating Coalition army could be trapped by Napoleon. However, Ostermann-Tolstoy rallied all of his troops for a stiff defense, and soon Vandamme's troops were repulsed. Vandamme's situation changed the next day. A Prussian corps commanded by Friedrich von Kleist attacked Vandamme's rear guard. Kleist then received help from a combined Russian and Austrian attack on his front, under the command of Generals Ostermann-Tolstoy and von Colloredo-Mansfeld. In an attempt to repulse simultaneous attacks on his front and rear, Vandamme ordered his forces to form squadrons. The inexperienced French troops were unable to fend off the allies, and soon withdrew from the battlefield, with heavy losses, including Vandamme himself as a captured prisoner of war.

In Vandamme's corps there were two Polish regiments of Uhlans, part of cavalry divisions under the command of General Jean Corbineau. These regiments were used by Vandamme to defend against enemy cavalry charges. One regiment, commanded by Colonel Maximilian Fredro (brother of playwright Alexander Fredro), was attacked after withdrawing to a defile and surrendered. The other regiment of Uhlans, under the command of Count Tomasz Łubieński (generally known in English as Thomas Lubienski) successfully withdrew.

Napoleon's victory in the latter battle coincided with his marshal MacDonald's defeat at Katzbach, but the Coalition victory in this battle has totally negated his victory, given the fact that his troops never completely crushed the enemy. Thus, by winning this battle, Ostermann-Tolstoy and his troops succeeded in buying much needed time for the Coalition armies to regroup after the Battle of Dresden.

According to a French anecdote, after the battle Vandamme was brought to and accused by Emperor Alexander I of Russia of being a brigand and plunderer. He retorted, "I am neither a plunderer nor a brigand, but in any case, my contemporaries and history will not reproach me for having murdered my own father." This statement apparently hinted at the widespread belief that Alexander I was implicated in the murder of his father, Emperor Paul I.[1]

The battlefield is mostly built over. There is a large monument topped with a lion next door to the Hotel Napoleon.