The First Canadian Army was a field army and the senior formation of the Canadian Army that served on the Western Front from July 1944 until May 1945 during the Second World War.

The First Canadian Army was formed in early 1942, replacing the existing unnumbered Canadian Corps, as the growing number of Canadian forces in the United Kingdom necessitated an expansion to two corps. By the end of 1943 Canadian formations in the United Kingdom consisted of three infantry divisions, two armoured divisions, and two independent armoured brigades. The first commander was Lieutenant-General A.G.L. "Andy" McNaughton, who was replaced in 1944 by General H. D. G. "Harry" Crerar. Both had been senior artillery officers in the Canadian Corps in the Great War. Allied formations of other nationalities were added to the First Canadian Army to keep it at full strength.[1] 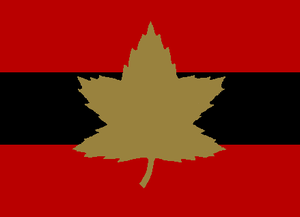 When the First Canadian Army was formed overseas in 1942, Lieutenant-General McNaughton's aim was to keep the Canadian Army unified to lead the cross-channel assault on northwest Europe.[1] Two brigades of the 2nd Canadian Division led the ill-fated Dieppe Raid in 1942.[3] Aside from this endeavour, the Army did not see combat until July 1943. In 1943, because the Canadian government wanted Canadian troops to see action immediately,[4] the 1st Canadian Infantry Division, 1st Canadian Armoured Brigade, and 5th Canadian Armoured Division were detached from the Army for participation in the Italian Campaign.[5] 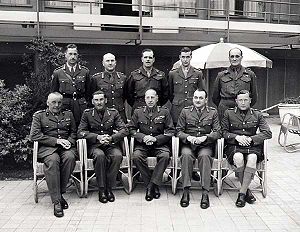 The Army proper first went into action in the Battle of Normandy and conducted operations at Falaise (e.g. Operation Totalize, Operation Tractable) and helping close the Falaise pocket. After reaching the Seine, the objective of the first phase of Operation Overlord, the Army moved along the coast towards Belgium, with the Canadian 2nd Division entering Dieppe at the beginning of September. The critical Battle of the Scheldt in October and November opened Antwerp to Allied shipping. 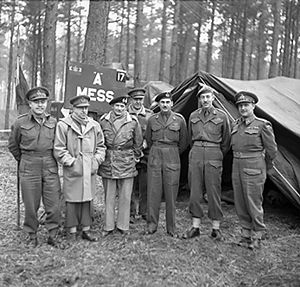 The First Canadian Army held a static line along the river Meuse (Maas) from December through February, then launched Operation Veritable in early February. By this point the Army, besides the II Canadian Corps, contained nine British divisions. The Siegfried Line was broken and the Army reached the banks of the Rhine in early March.

In the final weeks of the war in Europe, the First Army cleared the Netherlands of German forces. By this time the First Division and Fifth (Armoured) Division as well as First Armoured Brigade and the 1st Cdn AGRA had returned to the Army during Operation Goldflake and for the first time, both the I Canadian Corps and II Canadian Corps fought under the same Army commander.

The First Canadian Army was international in character. The size of Canada's military contribution on its own would likely not have justified the creation of a separate army-level command in North-West Europe, especially over the period when I Canadian Corps was away gaining valuable combat experience in Italy. However, both McNaughton and Crerar, backed up by the Canadian government, were successful in their lobbying to create a Canadian-led army enlarged with contributions from other Allied countries. In addition to II Canadian Corps (which included the Canadian formations under command described above), other formations under command included the British I Corps, and the 1st Polish Armoured Division, as well as, at various times, the American Timberwolf Division, 1st Belgian Infantry Brigade, Royal Netherlands Motorized Infantry Brigade and 1st Czechoslovak Armoured Brigade. The First Canadian Army in North-West Europe during the final phases of the war comprised the largest field army ever under the control of a Canadian general. Ration strength of the army ranged from approximately 105,000 to 175,000 Canadian soldiers to anywhere from 200,000 to over 450,000 when including the soldiers from other nations.

The 'Maple Leaf Route' was the designation of the army's main supply route. The route was usually divided into Maple Leaf Up and Maple Leaf Down, designating traffic to and away from the front, respectively.