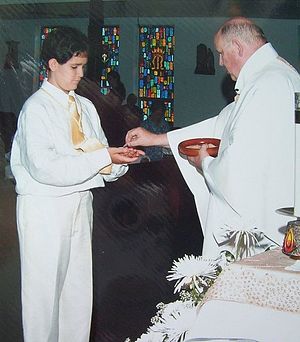 A young boy receiving his First Communion in Florida

The First Communion, or First Holy Communion, is a Christian ceremony held in the Latin Church tradition of the Catholic Church, as well as in many parts of the Lutheran Church and Anglican Communion, although other parts of these denominations traditionally allow reception of Holy Communion after confirmation.[1]

First Communion is the colloquial name for a person's first reception of the sacrament of the Holy Eucharist, and in these Christian churches, occurs typically at age seven to twelve when separated from Confirmation, depending on national custom. 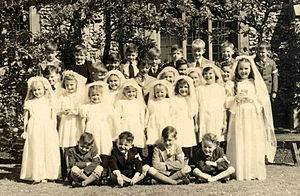 A group photo of children from Holyrood School at their First Communion, Swindon, Wiltshire, England, in 1949.

Catholics believe this event to be very important, as the Eucharist occupies a central role in Catholic theology and practise.

First Communion is not celebrated in the Eastern Orthodox churches, the Oriental Orthodox churches, or the Assyrian Church of the East, as they practice infant communion (which often is simultaneously administered with paedobaptism and confirmation). Some Anglicans allow infant communion (also called "paedocommunion"), while others require the previous reception of confirmation, usually during the teenage years.

Celebration of this religious ceremony is typically less elaborate in many Protestant churches. Roman Catholics and some Protestants believe that Christ is truly present in the Eucharist, although not through transubstantiation for many non-Catholic groups.

Other denominations have varying understandings, ranging from the Eucharist being a "symbolic" meal to a meal of "remembering" Christ's last supper. 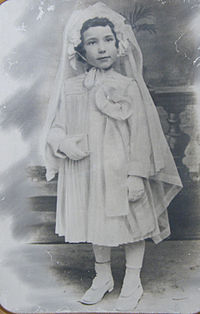 A little girl photographed for First Communion in Italy, c. 1919.

The sacrament of First Communion is an important tradition for Catholic families and individuals. For Catholics, Holy Communion is the third of seven sacraments received. It occurs only after receiving Baptism, and once the person has reached the age of reason (usually, around the second grade) first confession (the first sacrament of penance) must precede the first reception of the Eucharist. This order of the sacraments is practiced universally by all Roman Catholics, whereas Byzantine Catholics (Eastern Rite), for example, celebrate the sacraments of Baptism, Confirmation (Chrismation), and Holy Communion on the same day as an infant's baptism.

Traditions of celebration surrounding First Communion usually include large family gatherings and parties to celebrate the event. The first communicant wears special clothing. The clothing is often white to symbolize purity, but not in all cultures. Girls often wear fancy dresses and a veil attached to a wreath of flowers or hair ornament. In other communities, girls commonly wear dresses passed down to them from sisters or mothers, or even simply their school uniforms plus the veil and/or wreath. Boys may wear a suit, or tuxedo, or their Sunday best, or national dress.

In many Latin American countries, boys wear military-style dress uniforms with gold braid aiguillettes. In Switzerland both boys and girls wear plain white robes with brown wooden crosses around their necks. In Spain, Germany, Luxembourg and Austria, girls are dressed up as, so to speak, little brides (though this has been partly replaced by albs in more recent times).

In Scotland, boys traditionally wear kilts and other traditional Scottish dress which accompany the kilt. In the Philippines, First Communion services often occur on or around the Feast of the Immaculate Conception (the country's patron saint), with boys donning either the Barong Tagalog or semi-formal Western dress, and girls a plain white dress and sometimes a veil.

Gifts of a religious nature are usually given, such as rosaries and prayer books, in addition to religious statues, icons, and holy cards. Monetary gifts are also common.[2] 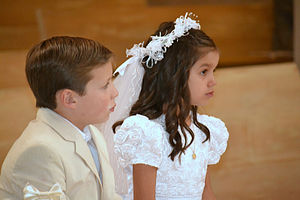 The social mission of First Communion is a rite of passage leading to confirmation[citation needed]. During the communist era, dominant societies initiation into the pioneer movement in communist countries that had large Catholic populations was an overt attempt to supplant the Catholic ritual (e.g., the Union of Pioneers of Yugoslavia). In all cases, a child at the age of seven to ten is initiated as a member of a group within which the individuals share certain values and culture.

Counterparts in other religions