First Parliament of the United Kingdom

In the first Parliament to be held after the formation of the United Kingdom of Great Britain and Ireland on 1 January 1801, the first House of Commons of the United Kingdom was composed of all 558 members of the former Parliament of the Kingdom of Great Britain and one hundred of the members of the House of Commons of Ireland.

By a proclamation dated 5 November 1800, the members of the new united Parliament were summoned to a first meeting at Westminster on 22 January 1801. At the outset, the Tories led by Addington enjoyed a majority of 108 in the new House of Commons.

Great Britain had been at war with France since 1792. The Prime Minister since 1783, William Pitt the Younger, led a broad wartime coalition of Whig and Tory politicians.

The principal opposition to Pitt was a relatively weak faction of Whigs, led by Charles James Fox. For four years after 1797 opposition attendance at Westminster had been sporadic as Fox pursued a strategy of secession from Parliament. Only a small group, led by George Tierney, had attended frequently to oppose the ministers. As Foord observes "only once did the minority reach seventy-five, and it was often less than ten". 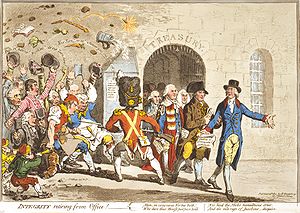 In Integrity retiring from Office! (1801), James Gillray caricatured the resignation of Pitt's Ministry in 1801.

Pitt wished to grant Catholic emancipation (the right for Roman Catholics to sit in Parliament), to help reconcile the Irish Catholic majority with the Union. King George III was opposed to that policy, so Pitt was compelled to resign in March 1801.

The new Tory Prime Minister was Henry Addington. He led another wartime administration of pro-government Whigs and Tories. This was however weaker than Pitt's Ministry as Pitt and his faction did not join the new government.

The younger opposition Whigs also became more involved in Parliamentary opposition. Charles Grey, on 25 March 1801 tried to persuade the House of Commons to set up a Committee on the State of the Nation. His motion was lost, but it attracted 105 supporters. The Foxite leaders gradually ended their secession from Parliament.

Pitt was generally supportive of the Addington Ministry, but was semi-detached from it. As the well known couplet tellingly observed "Pitt is to Addington, as London is to Paddington", which indicates the contemporary view of the relative abilities of the two Prime Ministers.

All British MPs and those Irish members representing constituencies which retained two members after the Union (the thirty-two Irish counties and the cities of Dublin and Cork) automatically retained their seats when the Union took effect on 1 January 1801.

Those members of the Irish House of Commons to sit at Westminster, who represented constituencies still enfranchised after the Union but reduced from two members to one (the remaining thirty one most considerable Irish boroughs and Dublin University), were selected by drawing lots. If one of the seats in the Irish Parliament was vacant, then the remaining member for the constituency was automatically chosen for the Westminster Parliament. If both seats were vacant a by-election was held.

Summary of the constituencies 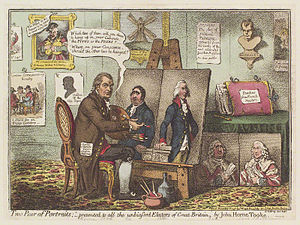 "Two Pair of Portraits;" – presented to all the unbiassed Electors of Great Britain, an anti-Whig caricature published 1798 by James Gillray showing Fox as the personification of vice next to a portrait of Pitt as the embodiment of honesty, followed by portraits of their fathers, Lord Holland and William Pitt senior displayed below. The title is an allusion to a pamphlet by John Horne Tooke.

Monmouthshire (1 County constituency with 2 MPs and one single member Borough constituency) is included in Wales in these tables. Sources for this period may include the county in England.

Table 1: Constituencies and MPs, by type and country

Table 2: Number of seats per constituency, by type and country