The Philippine Republic (Spanish: República Filipina, Filipino: Republikang Pilipino), more commonly known as the First Philippine Republic or the Malolos Republic, was a nascent revolutionary government in the Philippines. It was formally established with the proclamation of the Malolos Constitution on January 23, 1899, in Malolos, Bulacan,[Note 1] and endured until the capture and surrender of Emilio Aguinaldo to the American forces on March 23, 1901, in Palanan, Isabela, which effectively dissolved the First Republic.

The establishment of the Philippine Republic was the culmination of the Philippine Revolution against Spanish rule. On June 12, 1898, at Aguinaldo's ancestral home in Cavite, Philippine independence was proclaimed and the Philippine Declaration of Independence was read. The act had been prepared and written in Spanish by Ambrosio Rianzares Bautista, who also read its proclamation.[1] The Malolos Congress convened on 15 September, and produced the Malolos Constitution.[2] That constitution was proclaimed on 22 January 1899, transforming the government into what is known today as the First Philippine Republic, with Aguinaldo as its president.[3] In the meantime, on December 10, 1898, the Treaty of Paris had been signed, ending the Spanish–American War. Article 3 of the treaty transferred the Philippines from Spain to the United States.[4]

The Philippine–American War then ensued. Aguinaldo was captured by U.S. forces on March 23, 1901, and swore an oath accepting the authority of the United States over the Philippines and pledging his allegiance to the American government. On April 19, he issued a Proclamation of Formal Surrender to the United States, telling his followers to lay down their weapons and give up the fight, effectively ending the First Philippine Republic.[5] Subsequently, the U.S. continued its annexation of the islands pursuant to the Treaty of Paris.[4][6] The Philippines was under US sovereignty until 1946, when formal independence was granted by the Treaty of Manila.[7] It was the first Constitutional Republic in Asia.[8] It was titled "Constitución política", and was written in Spanish following the declaration of independence from Spain,[9] proclaimed on January 20, 1899, and was enacted and ratified by the Malolos Congress, a Congress held in Malolos.[10][11]

Although there were several Asian republics predating the First Philippine Republic for example, the Republic of Formosa or the Republic of Ezo, the Republic at Malolos was the first to frame a comprehensive constitution duly approved by an elected congress.[12] 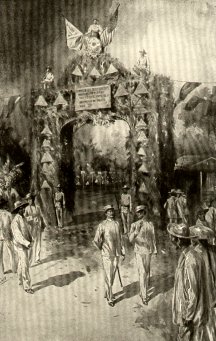 Municipal and provincial governments under the Republic had quickly reorganized upon Aguinaldo's decrees of June 18 and 20, 1898.[17] The Malolos Constitution had cited on Article 82 the organization of provincial and popular assemblies which had the power of taxation.

National budget and the Congress loan

One of the important laws passed by the Malolos Congress was the law providing for a national loan to buoy the national budget in which the Republic was trying to balance. The loan, worth 20 million pesos, was to be paid in 40 years with an annual interest of six percent. The law was decreed by Aguinaldo on November 30, 1898.[17][clarification needed][page needed]

State of the Republican Army

When Philippine independence was declared on June 12, 1898, the Philippine Revolutionary Army was renamed the Philippine Republican Army. Aguinaldo then appointed Antonio Luna as Director or Assistant Secretary of War by September 28, 1898, and the Philippines first military school, the Academia Militar was established in Malolos.

When the Republic was inaugurated on January 23, Luna had succeeded Artemio Ricarte as the Commanding General of the Republican Army. With such powers at hand, Luna attempted to transform the weak, undisciplined revolutionary army into a disciplined regular army for the service of the Republic.[18] 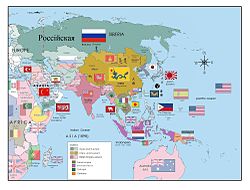 The map of Asia shows the Western power possessions and changes of political situations on Asia in the end of 19th century and early 20th century AD.
Main article: Philippine–American War

On November 13, in a conference in Bayambang, Pangasinan, Aguinaldo decided to disperse his army and begin guerrilla war. From that point on, distance and the localistic nature of the fighting prevented him from exercising a strong influence on revolutionary or military operations.[26] Recognizing that American troops blocked his escape east, he turned north and west on 15 November, crossing the mountains into La Union province.[27] Aguinaldo's party eluded pursuing American forces, passing through Tirad Pass near Sagada, Mountain Province where the Battle of Tirad Pass was fought on December 2 as a rear guard action to delay the American advance and ensure his escape. At the time of the battle, Aguinaldo and his party were encamped in Cervantes, about 10 km south of the pass. After being notified by a rider of the outcome of the battle and the death of del Pilar, Aguinaldo ordered that camp be broken, and departed with his party for Cayan settlement.[28] Aguinaldo was captured by American forces on March 23, 1901 in Palanan, Isabela. Following his capture, Aguinaldo announced allegiance to the United States on April 1, 1901, formally ending the First Republic and recognizing the sovereignty of the United States over the Philippines.

The cabinet only met in a few times in 1899 with the following men appointed to respective positions.

Malolos, the Official Capital of the First Philippine Republic 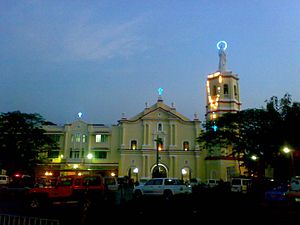 The Malolos Cathedral Basilica. The Palacio Presidencia and Office of the President Emilio Aguinaldo from September 1898 - March 1899.

In September 1898 General Emilio Aguinaldo made the Paroquia dela Inmaculada Concepcion an Augustinian erect town church of Malolos (now Cathedral Basilica) as the executive palace while the nearby Barasoain Church served as the legislative house where the Malolos Constitution was made. When the Americans captured Malolos Aguinaldo ordered General Antonio Luna to burn the Malolos Church including its huge silver altar.

The house had been the seat of General Emilio Aguinaldo's First Philippine Republic when he established it as his headquarters in San Isidro during the last part of his odyssey from the American forces.

On the 29th of March 1899, Gen. Emilio Aguinaldo arrived in San Isidro, Nueva Ecija and the town made as temporary capital of the First Philippine Republic. He stayed in this house which served as his executive office. When the Americans occupied San Isidro, the Sideco house served as the headquarters of Col. Frederick Funston who would later capture General Aguinaldo in Palanan, Isabela. General Aguinaldo's capture is said to have been planned in this house. It is now occupied by a Christian organization.[29]

American pursuit and capture of Aguinaldo

When it was constituted on January 22, 1899, in Malolos, that municipality became the seat of government of the Philippine Republic, and was serving as such when hostilities erupted between U.S. and Filipino forces in the Second Battle of Manila on February 4.[30] American forces pushing north from Manila after the outbreak of fighting captured Caloocan on February 10.[31] On March 29, as American forces threatened Malolos, the seat of government moved to San Isidro, Nueva Ecija.[32]

American forces captured Calumpit, Bulacan on April 27 and, moving north, captured Apalit, Pampanga with little opposition on May 4 and San Fernando, Pampanga on May 5. This forced the seat of government to be shifted according to the demands of the military situation.[33][Note 2]

In October 1899 American forces were in San Fernando, Pampanga and the Philippine Republic was headquartered not far north of there, in Angeles. On October 12, an American offensive to the north forced the Philippine Republic to relocate its headquarters in November to Tarlac, and then to Bayombong, Nueva Vizcaya.[34] On November 13, under pressure by American forces, Aguinaldo and a party departed Bayombong by rail for Calasiao, Pangasinan, from where they immediately proceeded eastwards to Sta. Barbara in order to evade pursuing American forces. In Sta. Barbara, they joined a force of some 1200 armed men let by General Gregorio del Pilar.[35]

Aguinaldo's party, traveling with del Pilar's force, reached Manaoag, Pangasinan on November 15. There, the force was split into vanguard and rear guard elements, with Aguinaldo and del Pilar in the vanguard.[36] The vanguard force overnighted in Tubao, La Union, departed there on November 16, and was in Naguilian, La Union by November 19, where word was received that American forces had taken Santo Tomas and had proceeded to Aringay. Aguinaldo's force arrived in Balaoan, La Union on November 19, pushed on the next day, and arrived at the Tirad Pass, a natural choke point, on November 23. General del Pilar decided to place a blocking force in Tirad Pass to delay pursuing American forces while Aguinaldo's party moved on.[37]

The Battle of Tirad Pass took place on December 2, 1899. 52 men of del Pilar's 60 man force were killed, including del Pilar himself. However, the Filipinos under del Pilar held off the Americans long enough for Aguinaldo's party to escape. Aguinaldo, encamped with his party about 10 km south of the pass in Cervantes, Ilocos Sur, was appraised of the result of the battle by a rider, and moved on. The party reached Banane settlement on December 7, where Aguinaldo paused to consider plans for the future. On December 16, the party departed for Abra to join forces with General Manuel Tinio.[38] The party traveled on foot through a pass at the summit of Mount Polis, and arrived at Ambayuan the next morning. The party pushed on to Banane, pursued closely by American forces. At this point, Aguinaldo's party consisted of one field officer, 11 line officers, and 107 men. The remainder of December 1899 was spent in continuous trek.[39]

The party was at the border of Abra and Cagayan provinces on Aguinaldo's 31st birthday on March 23, 1900. The trek from place to place continued until about May 22, 1900, when Aguinaldo established a new headquarters in Tierra Virgen.[40] On August 27, 1900, after American forces landed at Aparri, Cagayan, Aguinaldo concluded that Tierra Virgan had become untenable as a headquarters and decided to march to Palanan, Isabela.[40] On December 6, 1899, the party reached Dumasari, and arrived in Palanan the following morning.[41] Aguinaldo remained in Palanan until his capture there by American forces on March 25, 1901.[41]